A 16-year-old fully vaccinated boy with a history of asthma presented to the emergency department (ED) with persistent jaundice and increasing bilirubin levels.

The patient had had a 4-day history of abdominal pain and acholic stools, which had spontaneously resolved 3 weeks prior. He additionally reported a 1-week history of subjective fever, emesis, hematuria, and diarrhea. At that time, he had been seen at an outside ED, where he had been given a diagnosis of hepatitis A without formal testing and had been discharged home. Abdominal ultrasonograms from that visit revealed a contracted gallbladder with marked wall thickening. He reported exposure to unspecified food vendors and having swum in a freshwater lake.

Two weeks later, serial labs drawn outpatient by hepatology noted thrombocytopenia with a platelet count of 98 × 103/µL as well as leukopenia with a white blood cell count of 2600/ µL. His scleral icterus and facial jaundice had not resolved. The patient was subsequently advised to return to the emergency department. Results of a complete blood cell count (CBC) at this admission were significant for a low white blood cell (WBC) count of 2000/µL, low platelet count of 31 × 103/µL, and a low absolute neutrophil count (ANC) of 900/µL. Results of a comprehensive metabolic panel showed continued elevations of AST, total bilirubin, ALP, and ALT levels.

Initial criteria for aplastic anemia were not met based on cell lines; however, the patient’s bone marrow biopsy revealed hypocellular marrow with scant hematopoiesis, which was consistent with aplastic anemia. Percent of bone marrow cellularity was not specified in the report. However, percent of individual cell lines are listed in the Table. After platelet transfusions, improvement of liver enzyme levels, and clinical improvement, the patient was once again discharged, this time with a diagnosis of nontypeable viral/idiopathic hepatitis-associated aplastic anemia (HAAA). Outpatient follow-up appointments were scheduled in the hematology/oncology clinic for continued platelet transfusions. 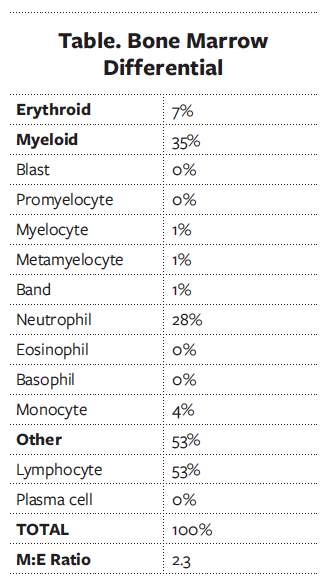 Two weeks after that, the patient was readmitted for fever and pain in an upper right molar. CBC results at admission were significant for a WBC count of 1000/µL, a hemoglobin level of 8.2 g/dL, and a platelet count of 7 × 103/µL. Repeat bone marrow biopsy during this admission revealed markedly hypocellular marrow at less than 5% without demonstrable hematopoiesis. His hospital course was complicated by invasive fungal disease in the sinuses requiring debridement, CMV pneumonitis, lung lesions in the right upper lobe found on biopsy, and pulmonary wedge resection. Lung biopsy specimens grew Bipolaris species, Purpureocillium lilacinum and Streptococcus mitis. He was managed in the pediatric intensive care unit for hypotensive shock and worsening respiratory failure requiring bilevel positive airway pressure at night. The patient’s case was followed by the nephrology consult team for acute kidney injury requiring hemodialysis, continuous renal replacement therapy, and intermittent hemodialysis.

Treatment for HAAA included anti-thymocyte globulin (ATG) plus cyclosporine, along with filgrastim, pentamidine, and platelet and blood transfusions. It was determined that the patient’s only full sibling was only a 3 of 6 HLA match. Therefore, this immunosuppressive regimen was the protocol while an alternative HLA-matched bone marrow transplant (BMT) donor was identified. However, with uncontrolled infections and progressive end-organ damage of his lungs and kidneys, he was not considered a candidate for BMT, as there was a strong risk of rejection. He additionally received an antibiotic and antifungal regimen

Due to his worsening neuropathic pain and continuing clinical decompensation despite maximizing ventilatory and vasopressor support, the decision was made with his family to withdraw care and to maximize comfort until the patient died.

First described in 1955, HAAA is a variant that accounts for 2% to 5% of cases of aplastic anemia in Western countries.1 The reported annual incidence rate is 2 per million in Western countries and is 2 to 3 times higher in Asia.2 HAAA is defined as an acquired aplastic anemia that is followed by acute hepatitis of any cause.3 The etiology is idiopathic in 93% of cases.4 Onset usually follows acute hepatitis by 1 week to 4 months.5 Other case reports have identified patients of varying demographics with this condition; however, it most commonly affects males younger than age 18 years.6 More epidemiologic studies are needed to understand the differences in incidence between geographic areas. More than 80% of HAAA cases have been associated with hepatitis viruses that are not hepatitis A virus or hepatitis B virus—such as hepatitis G virus; other viruses that have been associated with HAAA include parvovirus B19, CMV, Epstein-Barr virus, echovirus 3, transfusion-transmitted virus, and other unknown viruses.3

The pathophysiology of HAAA is thought to be immune-mediated. Compared with pediatric patients with idiopathic aplastic anemia, pediatric patients with HAAA were noted to have significantly shorter lymphocyte telomere lengths, which then correlated with the severity of hepatic dysfunction.5 Patients with HAAA also had lower numbers of CD3+, CD4+, and CD8+ T lymphocytes.5 Conversely, cytotoxic T lymphocytes are activated during viral infections and are therefore involved in hepatic inflammation, especially liver sinusoidal cell endothelial injury.1,6 More specifically, activated cytotoxic lymphocytes were found in the bone marrow along with elevated interferon-γ and tumor necrosis factor-α, leading to pancytopenia.1,2 Further studies are required to describe the mechanism of T-cell activation in this disease process.

Jaundice is the most common presenting sign in patients with HAAA, while elevated transaminase levels and conjugated hyperbilirubinemia are almost always noted on laboratory test results.6 Across case reports and other studies, every aspect of the clinical course of this condition is variable, including time from onset of jaundice to development of aplastic anemia, time until resolution of hepatitis, and potential relapse.6

Similarly, our patient exhibited persistent jaundice and elevated liver enzyme levels throughout his disease course. Additionally, he progressed from the onset of jaundice to the diagnosis of aplastic anemia over the course of 5 to 6 weeks.

Treatment of HAAA depends on the severity of the aplastic anemia.2 As per the Camitta criteria for aplastic anemia, severity is categorized as nonsevere (NSAA), severe (SAA), or very severe (VSAA). NSAA is characterized as bone marrow cellularity of less than 30% with peripheral cytopenia. SAA is classified as less than 25% bone marrow cellularity with 2 of the following: ANC of less than 500/µL, platelet count less than 20 × 103/µL, or reticulocyte count less than 60 × 103/µL. VSAA includes all of the criteria for SAA, along with an ANC of less than 200/µL.7,8 The response rate to treatment is estimated to be 70% to 82%, which is the same as for patients with idiopathic acquired aplastic anemia.2,9 Due to rapid deterioration from severe HAAA, BMT with an HLA-matched donor is the recommended therapy, especially in patients younger than age 40 years.3,8 The 5-year survival rate is 86%.4 BMT with a non-HLA matched donor also is possible, but long-term survival is halved.1

ATG plus cyclosporine is used as immunosuppressive therapy in NSAA to decrease activity of the cytotoxic T lymphocytes and reduce damage to bone marrow.9 ATG alone has a response rate greater than 70% and is more effective in the pediatric population.4 Furthermore, in one study, 90% of patients treated with both ATG and cyclosporine progressed to transfusion dependence.8 This dual regimen is additionally employed after BMT to maintain remission.3 The success of immunosuppressive therapy depends on the tissue regeneration ability of the organs affected, however.3 Granulocyte colony-stimulating factor treatments are used largely to increase neutrophil counts but have not been found to improve survival after 3 years.2 A combination of prednisone and azathioprine has been tested in one case, but the azathioprine may have further aggravated the cytopenia.10

In this case, the 16-year-old patient had an initial episode of acute hepatitis of unknown etiology, which was followed by progressively worsening pancytopenia; ultimately, his condition was classified as SAA. Despite immunosuppressive therapy and recurrent platelet transfusions, the patient did not clinically improve. He continued to contract infections and therefore was not a candidate for BMT. As such, the patient remained on his immunosuppressive therapy of ATG plus cyclosporine, which is the mainstay of treatment for SAA. Despite treatment with ATG plus cyclosporine, the patient did not achieve transfusion dependence, which could be attributed to progressive end-organ damage of his lungs and kidneys.