A 70-year-old woman presented to the emergency department with right lower quadrant (RLQ) abdominal pain, nausea, and vomiting. The pain had started approximately 1.5 days prior (7 of 10 pain) but since had become very severe (10 of 10 pain), prompting her to seek medical treatment. She reported that the pain had developed suddenly without provocation, and she characterized it as sharp, throbbing, and radiating to her right lower back. Additionally, she had had 20 episodes of nonbloody emesis since the onset of the pain. She also reported bloating and mild distention. She denied any other bowel changes, urinary changes, vaginal discharge, fever, weight changes, or early satiety.

History. Of note, the patient reported having experienced a similar episode of RLQ abdominal pain, nausea, and vomiting approximately 1 year prior, which had resolved spontaneously within 24 hours. She had not been evaluated at that time. Since then, she had experienced intermittent episodes of 7 of 10 RLQ pain every 3 to 4 months. The episodes had lasted approximately 1 hour and had resolved on their own.

The patient was generally healthy with no chronic medical problems. She had no personal or family history of gynecologic malignancy. She denied any history of sexually transmitted infections.

Physical examination. On examination, the abdomen was soft, with RLQ tenderness and some midline tenderness. A pelvic examination was not performed given the patient’s lack of gynecologic complaints.

An abdominal ultrasonogram revealed a potential fibroid. A subsequent abdominal computed tomography scan showed a right adnexal mass, which crossed the midline and impinged on the bladder. There was no evidence of omental caking, ascites, or lymphadenopathy.

Treatment. The patient subsequently underwent laparoscopic right salpingo-oophorectomy and mass excision. The right ovary was noted to be firm, with evidence of torsion. The mass was moved away from the sidewall and uterus and was detorsed under direct visualization. The 23 × 12 × 5-cm mass was then removed with an adequate border. It was placed in an impervious specimen bag, brought to the abdominal wall, morcellated in the bag, and removed from the abdominal cavity. The bag was inspected and found to be intact. Two fluid samples were taken, one near the liver and one in the cul-de-sac. An endometrial biopsy was also obtained. The remainder of the surgical exploration revealed no abnormal findings.

Outcome of the case. As of 4 months since having undergone removal of the mass, the patient had not had any subsequent episodes of RLQ abdominal pain. The follow-up plan includes routine cervical cancer screening.

Discussion. Cases of chronic intermittent ovarian torsion classically present with chronic unilateral lower abdominal pain. The pain can be cyclic1-3 or constant.1,4,5 In some cases, the patient is able to cite an event at the onset of symptoms consistent with those of acute ovarian torsion.4,5 Our patient complained of intermittent unilateral lower abdominal pain and was able to identify an event 1 year prior when her symptoms had first developed.

Benign ovarian fibromas are frequently asymptomatic and discovered incidentally, but the most common symptom is abdominal pain.6 In our case, the patient did report chronic urinary frequency, which may have been related to her ovarian mass, particularly because imaging results showed impingement of the mass on the bladder. She did not, however, have any evidence of abdominal enlargement or ascites despite the presence of the large mass.

In other cases of chronic ovarian torsion, an ovarian mass or cystic structure is often found.3-5 Our patient was found to have an ovarian fibroma, a benign fibroblast tumor arising in the ovarian stroma.7 Fibromas are relatively common, accounting for 80% of sex cord-stromal tumors6 and 4% of all ovarian neoplasms.7 Grossly, ovarian fibromas often appear as firm, round, gray-white masses.7 Microscopic evaluation classically shows uniformly distributed spindle-shaped cells in a swirling pattern, with no cytologic atypia and minimal mitotic activity.6 Our patient’s mass was consistent with these findings (Figures 1 and 2). 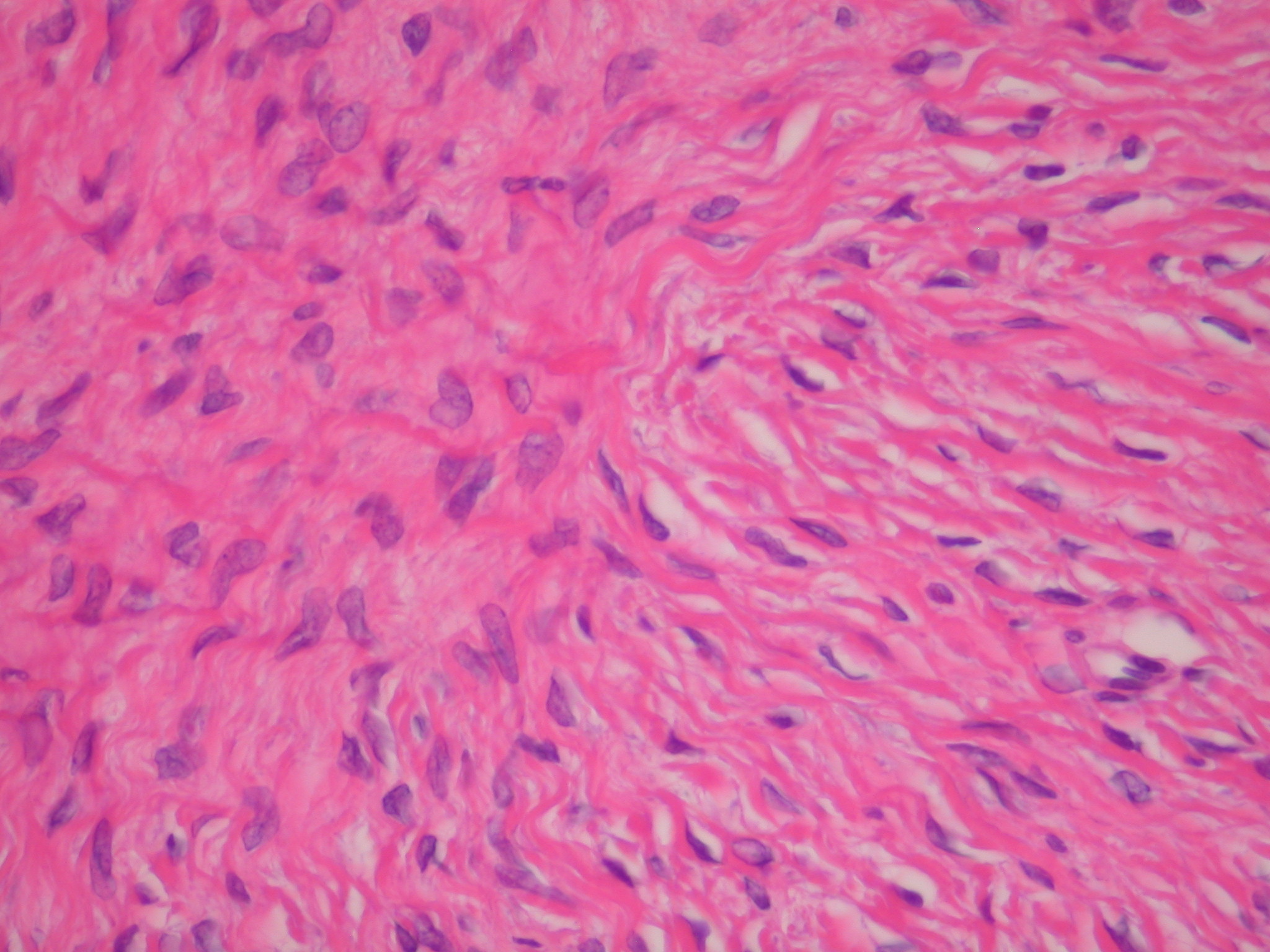 Figure 1. High-power view of the ovarian mass specimen showing no cytologic atypia and no mitotic activity. 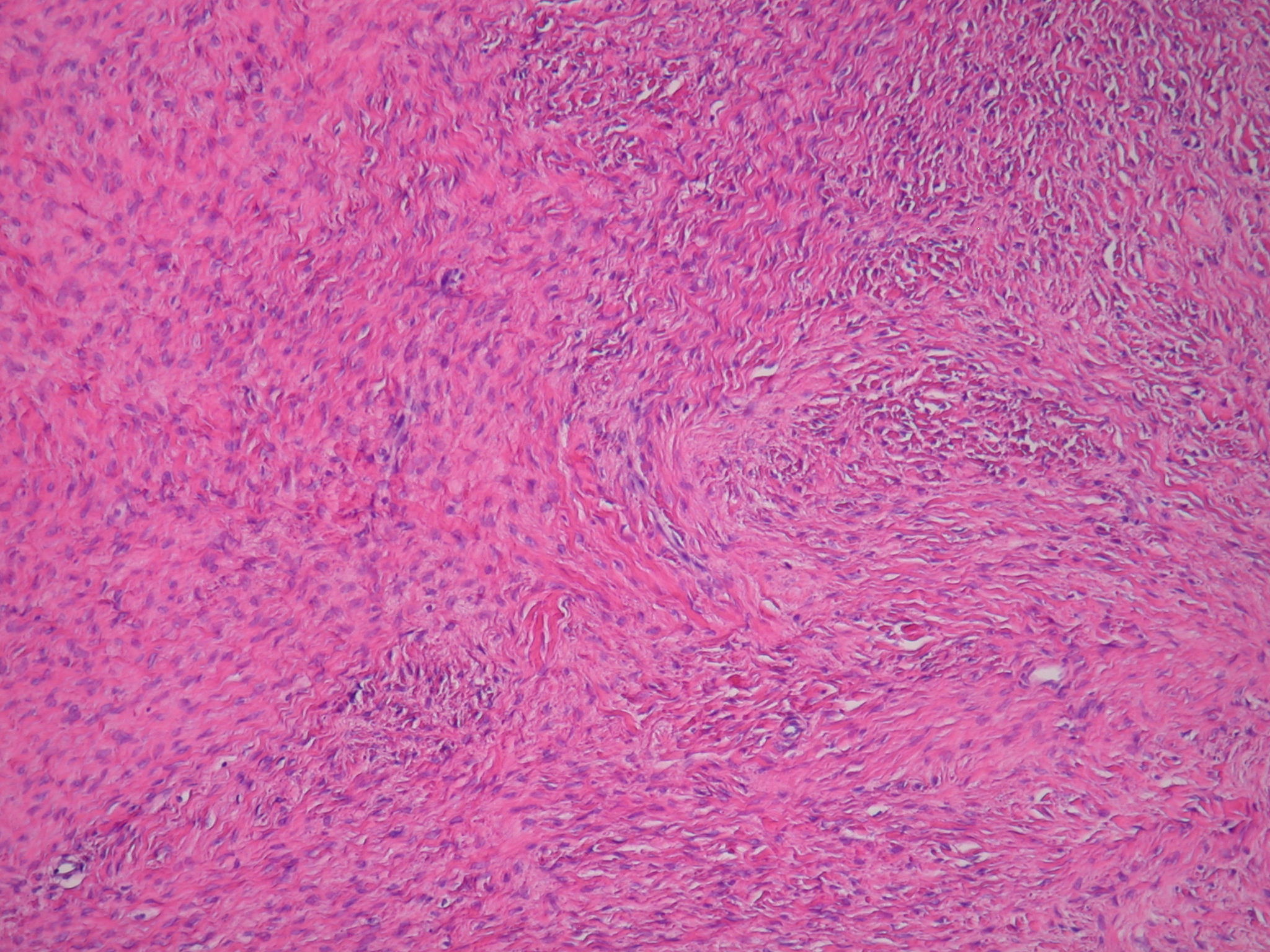 While visualized during laparoscopic examination, the 23 cm ovarian fibroma converted from being torsed to detorsed. To our knowledge, this is the first reported case where the conversion from a torsed to detorsed state was witnessed. This further supports the hypothesis that this patient’s pain was secondary to intermittent torsion of her right ovary.

In previous case reports discussing chronic ovarian torsion, pathology reports typically revealed evidence of chronic hypoxia of the ovary.2-5,8 Our patient’s case was unique in this way, since no evidence of necrosis or signs of chronic hypoxia were present. This indicates that the torsions were likely partial and did not completely occlude the ovarian blood supply.

In conclusion, chronic intermittent ovarian torsion should be considered in cases of intermittent severe lower abdominal pain, particularly when an ovarian mass is found. In cases without ovarian necrosis or evidence of hypoxic changes, partial torsion may be an additional consideration.