A Man With Yellow Armpits

For "Irritant Contact Dermatitis Caused by Hand Sanitizer Use and Handwashing During the COVID-19 Pandemic," click here

A 48-year-old man presented to his primary care office with numerous firm yellow nodules attached to his armpit hairs for several weeks (Figure). He denied pain or pruritus; however, a new foul smell had developed that did not improve with showering or the use of deodorant. The armpits of his shirts had become stained yellow. 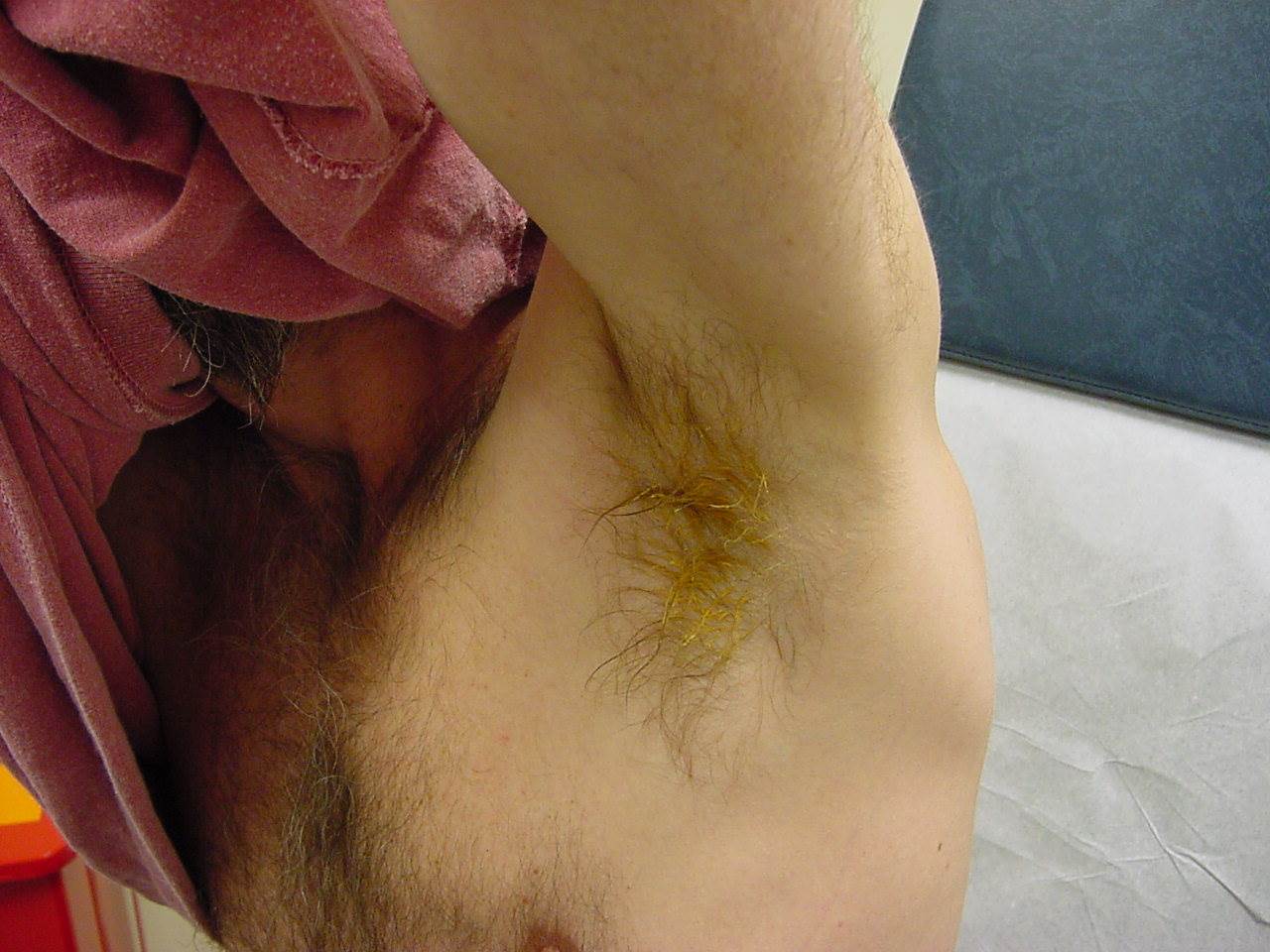 Based on the patient’s history and the clinical appearance, he received a diagnosis of trichomycosis axillaris.

Trichomycosis axillaris is a superficial bacterial infection involving nodular, insoluble concretions that encircle axillary hair shafts. The name of the condition is a misnomer because there is no fungal involvement; it has been better described in the literature as trichobacteriosis or bacterial trichonodosis. Bacteria from the genus Corynebacterium secrete a hard substance that creates an immobile, beaded material.1 The secretion can be yellow, as in our patient’s case, or black or red, with the differences in color thought to likely be caused by infection with different Corynebacterium species.1

Men are more commonly affected than women due to cultural hair-removal customs, and most cases occur in humid or tropical climates. Most patients present with axillary symptoms, although the infection can occur in other areas such as the pubic area or intergluteal area. The infection can be transmitted to others through very close contact. Patients often experience an associated increase in sweating, changes in hair texture, or a foul odor. The infection is otherwise asymptomatic and is likely underreported and underdiagnosed due to its relatively mild symptomatology.1

Trichomycosis can be detected under a Wood lamp and by way of microbiological tests, but empirical treatment is often a reasonable first step when the condition is suspected. First-line management includes antimicrobial soap, benzoyl peroxide wash, topical erythromycin, and shaving of the affected hairs for a few weeks. Topical antimycotic agents have been shown to be effective, and oral erythromycin is indicated in severe cases.2

Piedra is an infection with the fungus Trichosporon beigelii and is characterized by white (soft and gelatinous) or black (firm) concretions on the hair shafts, usually of the scalp. Unlike trichomycosis, piedra nodules can be easily separated from the hair, and hair shaft breakage is common.3,4

Hair casts are parakeratotic scales, made up of desquamated epithelial cell plugs, that encircle hair follicles. Unlike trichomycosis, hair cast concretions are mobile along the involved hair shaft and often occur in patients with psoriasis or seborrheic dermatitis.3,5

Pediculosis is a parasitic infection with blood-feeding lice. The body louse attaches its eggs to clothes, the head louse attaches eggs to hair follicles, and the crab louse attaches eggs mainly to pubic hairs. Early stages of trichomycosis can sometimes be confused with pediculosis, given that the discrete nodules appear and feel similar to nits, but as pediculosis becomes chronic, the concretions lengthen, creating a sheath along the hair shaft, and often deepen in color. All lice infections are contagious and very pruritic due to hypersensitivity reaction from lice saliva, unlike trichomycosis, which typically causes little discomfort.6

Erythrasma is similar to trichomycosis in that it is also caused by a Corynebacterium species—specifically Corynebacterium minutissimum. Erythrasma often affects persons with diabetes and persons who are obese. It is characterized by nonpruritic, pink and brown, scaly skin patches, typically in skin folds.7

The patient was successfully treated with 2 weeks of the synergistic approach of shaving his armpit hair 3 times per week, using an antimicrobial body wash daily, and applying topical erythromycin daily. His symptoms fully resolved and had not recurred at a 1-month follow-up visit.