Iatrogenic Pneumocephalus Complicated by Cardiac Arrest in a Peripartum Patient

Lumbar epidural anesthesia is frequently administered to the obstetric patient, given the excellent localized analgesia and safety profile. The loss of resistance (LOR) is a well-established technique to identify and access the epidural space; however, this technique is associated with risks. One rare complication is pneumocephalus (PNC) secondary to the introduction of air into the subdural space. The incidence of this complication is poorly defined, but multiple case studies have documented this complication, and one study of 182 obstetric patients reported a 1.6% occurrence rate,1 often with the prominent symptom of a severe frontal headache.2-5

We present a case of PNC complicated by cardiac arrest, which to our knowledge has been reported only twice in the literature. We discuss the importance of early recognition of this rare complication and its management.

A 27-year-old gravida 1, para 0 woman who was 38 weeks pregnant with a history of gestational diabetes and hypothyroidism presented in labor for evaluation for vaginal delivery. At the time of presentation, epidural anesthesia was placed in the L4-5 disk space for pain control. She was noted to have arrest of labor, and a cesarean delivery was deemed appropriate.

Prior to initiation of the cesarean delivery, the patient’s epidural line was dosed with 15 mL of lidocaine. Immediately after epidural lidocaine administration, the patient lost consciousness, with cessation of cardiac activity on the monitor, prompting the operative team to initiate the advanced cardiac life support protocol. After 1 minute of cardiopulmonary resuscitation, spontaneous cardiac function returned, but with bradycardia at 40 beats/min and a blood pressure of 120/50. The patient remained unresponsive and was intubated by the anesthesia team.

An emergent cesarean delivery was then performed without incident. The patient remained unconscious at the conclusion of the case, but 1 hour after initial loss of consciousness, the patient awoke, became responsive, was successfully extubated, and maintained adequate oxygen saturation. She was transferred to the surgical intensive care unit (SICU) for further evaluation, with headaches, mild back pain, and dizziness as her only symptoms of concern. 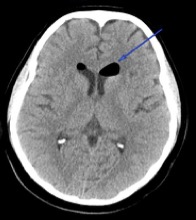 Figure 1. Axial CT image of the head on postoperative day 1. The arrow denotes pathologic air in the left ventricle. 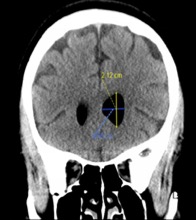 Figure 2. Sagittal CT image of the head on postoperative day 1 showing pathologic air in the ventricles. 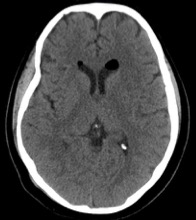 The patient was kept on intravenous fluids, bed rest, and oxygen supplementation and analgesics. She improved and was transferred to the obstetrics floor. Magnetic resonance imaging (MRI) was performed on postoperative day 4 prior to discharge; the results demonstrated a continued decrease of the air in the lateral ventricles without any acute infarcts (Figure 4). 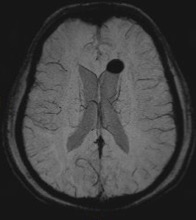 Figure 4. Axial MRI image of the head on postoperative day 4 showing a continued decrease in the amount of air in the lateral ventricles without any acute infarcts.

In our patient, a noncontrast head CT scan was used to diagnose PNC. The likely etiology of cardiac arrest in this patient was the introduction of air into the cerebrospinal compartment. This may have led to the formation of a space-occupying lesion that caused compression on sympathetic nervous structures, and acute intracranial hypotension or hypertension, which may have led to her cardiac arrest.6 A similar diagnosis has been described recently by Shin and colleagues6 in 2 women who underwent epidural injections for chronic pain management and developed PNC and pneumorrhachis precipitating cardiac arrest. In both cases, the women presented more than 1 hour after epidural administration.6

The literature is rife with instances of epidural-induced PNC in the peripartum period, as well.1,2,6,8,9 The technique of epidural administration is key to understanding the incidence of this event. In the largest study to date of 34,819 epidurals performed on women in the peripartum period, Stride and Cooper10 demonstrated the superiority of saline LOR technique, with a dural puncture rate of 0.6%, which was significantly lower than the overall rate of 1.3%. Historically, the air LOR technique was used given concerns about the locking of the syringe plunger onto a glass syringe when saline is applied. However, with modern manufacturing standards, plastic syringes may be used, which are not associated with this problem.11

PNC may be described as acute (<72 hours) or chronic (>72 hours); it may also be characterized as early (<7 days) or late (>7 days).12 Furthermore, it can be defined as tension PNC when intracranial hypertension is present, often demonstrated by mass effect on imaging and neurologic deterioration.12

PNC most commonly occupies the subdural space near the frontal cortex.12 When a sufficient amount of air (at least 2 mL on plain radiographs and 0.55 mL on CT scans) is present, the Mount Fuji sign is demonstrated, a classically described radiological sign of PNC, and it often warrants immediate neurosurgical and neurological evaluation.12,13

PNC is absorbed without intervention under most circumstances. Conservative treatment involves placing the patient in the supine position, avoiding coughing and sneezing, administering pain and antipyretic medications, and administering osmotic diuretics.12 Supplemental oxygen is also recommended to increase the rate of absorption. With these measures, reabsorption can be observed in 85% of cases after 2 to 3 weeks.14 The use of hyperbaric oxygenation is controversial but has been shown to decrease hospital length of stay by 4.1 days and possibly reduce the occurrence of meningitis.15

Unlike standard PNC, tension PNC is considered an emergency.12 Efforts are made to expeditiously remove the collection via a burr hole, needle decompression, or closure of the dural defect.12

PNC is a rare complication of epidural anesthesia that tends to occur more often with the air loss technique used for epidural analgesia in peripartum patients. It presents as a sudden onset of headache at the time of epidural administration.2-4 Treatment involves supine positioning, supplemental oxygen, and close monitoring; most cases resolve spontaneously.12 Acute mental status changes should raise the suspicion for a tension PNC that may require emergency neurosurgery. Using a saline LOR technique may reduce the complication of dural puncture to less than 1% and prevent PNC.10