A 51-year-old woman with a history of irritable bowel syndrome and hypothyroidism presented to the emergency department with worsening abdominal pain for a period of 24 hours. She stated that the abdominal pain had been gradually worsening and was sharp in nature.

History. She denied ever experiencing abdominal pain of this magnitude, although she did report having chronic abdominal pain secondary to her irritable bowel syndrome. The patient also denied any previous episodes of hematochezia, nausea, vomiting, or diarrhea, as well as any unplanned loss or gain of weight.

Physical examination. The patient had tenderness to light palpation in the right lower and right upper abdominal quadrants. The abdomen was nondistended, bowel sounds were present in all 4 quadrants, and no hepatosplenomegaly was noted. Rectal examination findings were negative for fecal occult blood and negative for any identifiable gross pathology. The patient was afebrile without leukocytosis and was hemodynamically stable.

Diagnostic tests. Computed tomography (CT) scans revealed colonic intussusception at the hepatic flexure with thickening of the ascending colon (Figure 1). Gastroenterology and surgery consults were obtained, and she was admitted to the hospital. 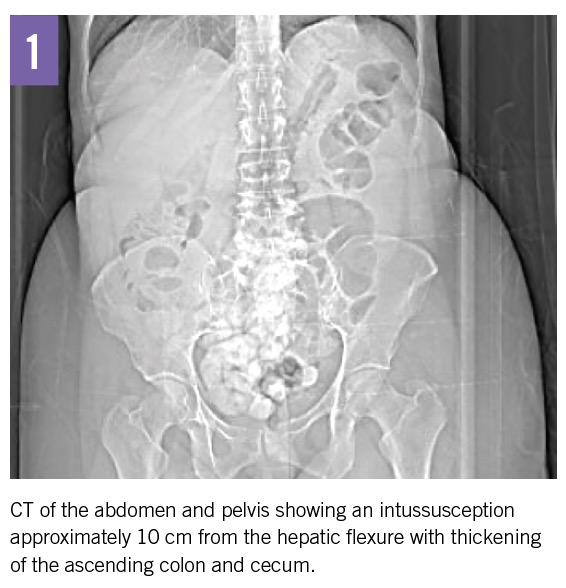 On the first hospital night, the patient experienced a large episode of hematochezia. On day 2, the surgery team recommended immediate colonoscopy for further investigation. However, the gastroenterology team favored repeating abdominal CT to determine whether the bowel remained patent or was obstructed, with the purpose of determining whether it was safe to offer a barium enema for resolution of the intussusception. Due to patient intolerance of oral contrast agents, radiography of the kidneys, ureters, and bladder was done instead; the results showed a nonobstructive bowel gas pattern, providing the evidence needed to proceed with a barium enema. An enema with Gastrografin was administered the next day, which resulted in resolution of the intussusception as confirmed via abdominal radiography. Subsequent abdominal radiographs on hospital day 2 showed a filling defect of the cecum, raising the possibility of a mass or residual intussusception. Colonoscopy was then performed on day 3, which revealed a 5-cm mass in the ascending colon. Biopsies were obtained, and the mass was tattooed.

On day 4, a right hemicolectomy was performed, during which the patient was found to have an appendiceal mass (Figures 2-4). The mass was found to be an appendiceal mucinous adenocarcinoma that had not yet penetrated the basement membrane. After tolerating diet, denying abdominal pain, and having a bowel movement, the patient was discharged home on postoperative day 3, with follow-up appointments scheduled for surgery and gastroenterology within 1 week. 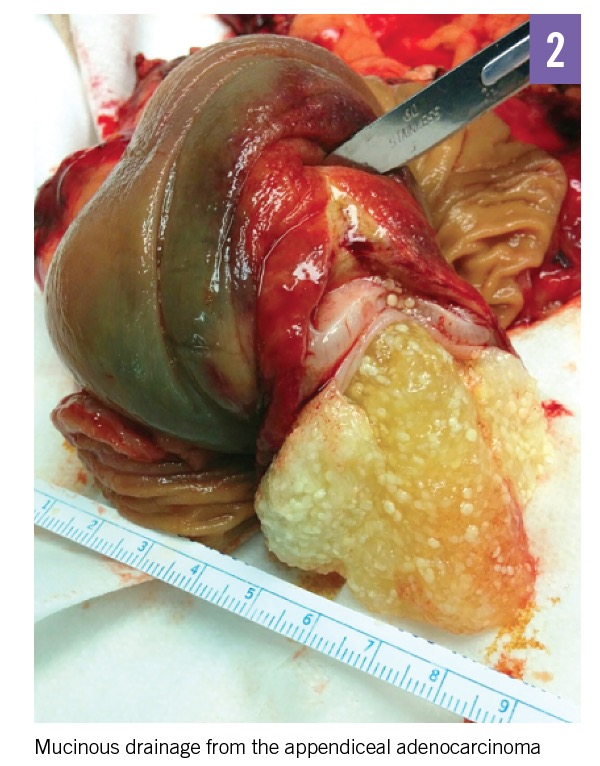 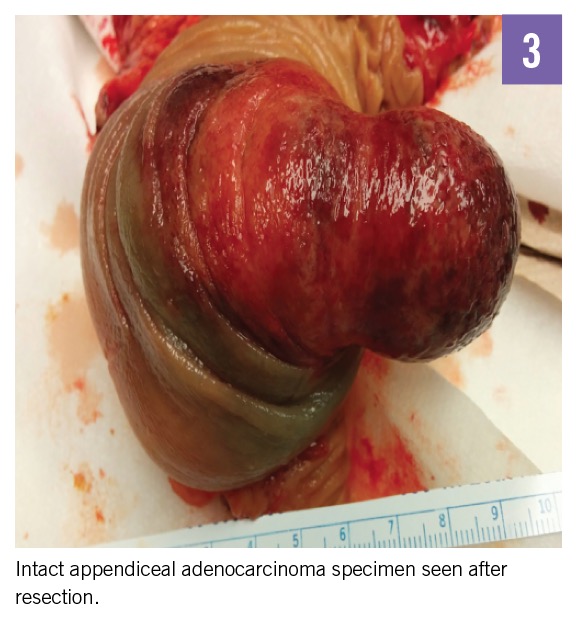 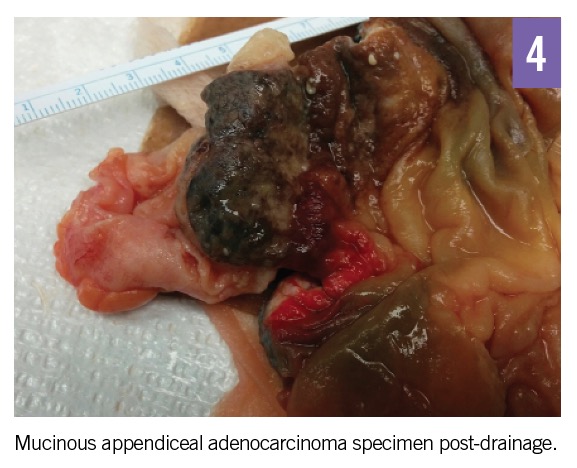 Discussion. Adult bowel intussusception is a very rare occurrence, with an incidence rate of 2 to 3 cases per 1 million annually.1 More commonly, intussusceptions occur in children and present with cramping abdominal pain, bloody diarrhea, and a palpable abdominal mass.2 A small number of intussusceptions are idiopathic, meaning without a lead point lesion. Secondary intussusceptions, which comprise most observed cases, contain a lead point lesion from conditions such as inflammatory bowel disease, Meckel diverticulum, postoperative adhesions, or neoplasms.3 Abdominal CT is the diagnostic modality of choice for intussusception, and surgery is the definitive treatment.4,5

Colonic intussusception in an adult is rare, but colonic intussusception as a result of an appendiceal adenocarcinoma is exponentially more unique. This case shows the ability of significant appendiceal neoplasms to form in the absence of symptoms. For our patient, intussusception proved to be a blessing in disguise due to the fact that it led to the uncovering of a significant intra-abdominal neoplasm before it became malignant. While this patient was fortunate to have had her neoplasm caught early, due to the nature and location of the organ, appendiceal neoplasms often are not found until they have infiltrated the basement membrane and spread throughout the body.