An 8-year-old girl with no significant medical history presented with a 4-day history of diplopia and pain on eye movements. She initially had been seen by neurology clinic and had undergone magnetic resonance imaging (MRI) of the brain, the results of which were normal. She subsequently was referred to a pediatric ophthalmology clinic for further evaluation.

The patient was unsure whether she had had this problem before, although her mother recalled her walking with her head tilted when the girl was a toddler, but this had self-resolved. There was no history of eye injury, trauma, or headaches. The girl’s father had a history of strabismus, but there was no other pertinent family history.

On physical examination, the girl was found to have diplopia on left gaze and limited extraocular movements with the right eye on upward and inward gaze (Figure). 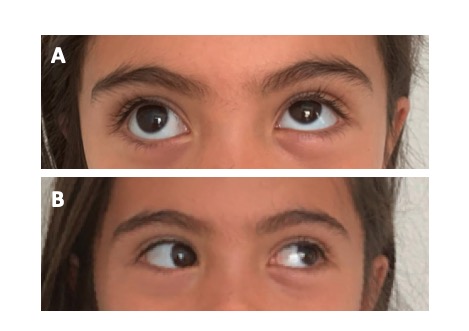 Ophthalmologic examination showed she had 20/20 visual acuity in both eyes and minimal left head turn at baseline. In primary and near positions, there was no strabismus; however, in left head tilt, there was a small vertical misalignment. The optic nerve, macula, and peripheral retina appeared normal on fundoscopic examination. The dilated examination findings were normal except for mild torsion in the right eye compared with the left.

The patient was diagnosed with right Brown syndrome, possibly congenital, based on her history of head tilt as a toddler. Given her age and prognosis, follow-up was recommended in 1 year, with no additional treatment recommended.

Brown syndrome, first described as superior oblique (SO) tendon sheath syndrome by Dr. Harold W. Brown in 1950, is a rare form of strabismus that is characterized by restriction of upward gaze above the horizontal level when the eye is adducted.1 It is caused by pathologies that result in mechanical restriction of the SO muscle tendon through the trochlea. Clinically, Brown syndrome presents like an inferior oblique (IO) muscle palsy, with vertical diplopia on ocular rotation upward and nasally.

Several theories have been proposed to explain the cause of Brown syndrome. The syndrome may be acquired or congenital. Although it is difficult to determine, the congenital form of the disease is possible in this patient for a number of reasons. First, the acquired form is relatively rare in children.2 Second, the patient’s history of head tilt as a toddler suggests a longstanding problem with the visual inputs of the right eye. Third, many cases of acquired Brown syndrome are related to inflammation or trauma of the SO tendon-trochlea complex. The acquired form has been described in association with numerous conditions including chronic sinusitis, inflammatory diseases (eg, systemic lupus erythematosus, rheumatoid arthritis, Sjögren syndrome, scleroderma, juvenile idiopathic arthritis, Still disease), Sneddon syndrome, trauma, surgery, and orbital metastasis.3-15 Our patient lacked any signs or symptoms suggesting any of these causes for her strabismus.

It is important to note that despite reports of systemic disorders causing acquired Brown syndrome, most cases are idiopathic.16 Imaging is an important part of the workup, because it can help assess orbital pathologies including inflammation, edema, and thickening of the SO tendon17,18; however, our patient lacked any of these signs on MRI. Approximately 90% of Brown syndrome cases present unilaterally, with hereditary predisposition present in some cases.19,20

When diagnosing Brown syndrome, it is important to rule out other nonrestrictive causes of limited ocular elevation in adduction, including IO muscle palsy. Brown syndrome can be distinguished from IO muscle palsy due to its association with minimal or no SO muscle overaction as well as a positive forced duction test.11

Treatment of Brown syndrome in children depends on the child’s age, symptoms, and severity of disease. Congenital Brown syndrome is unlikely to improve spontaneously, so surgery must be considered; however, surgery is only indicated in the presence of a head tilt or chin elevation that significantly interferes with the child’s quality of life.11 If symptoms worsen, surgery may be required, specifically with either a silicone tendon expander or tenotomy.11 Patients with acquired Brown syndrome with evidence of systemic disease are typically treated with anti-inflammatory medications, including ibuprofen or local corticosteroid injections.5,8,9,11,12

This case report adds to the scarce literature on pediatric patients with Brown syndrome who lack evidence of coexisting systemic disease. In particular, it highlights the importance of close observation for possible stabilization or resolution of symptoms in patients with mild disease prior to surgical intervention.