Chromium and Cinnamon Supplements for Patients With Type 2 Diabetes: How Strong Is the Evidence? 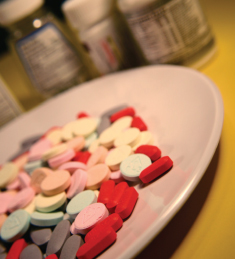 Q: What types of chromium supplements are available?

A: Chromium is an essential trace element that is found in foods such as whole grain, broccoli, nuts, green beans, wine, and beer.1 Severe chromium deficiency is rare,1 but chromium has become a commonly sold supplement accounting for $85 million in sales in 2002.2 There are different forms available, including chromium chloride, chromium nicotinate, and chromium picolinate. Chromium picolinate is designed to be better absorbed than the others.1

Q: How does chromium affect patients with type 2 diabetes?

A: Chromium likely is needed to maintain normal carbohydrate metabolism. Deficiency is rare, and the question is whether giving additional chromium to patients with sufficient chromium levels results in any improvement in insulin resistance and control of diabetes. Trials conducted in patients with prediabetes have not shown any benefit.1,2 Studies of chromium supplementation in patients with type 2 diabetes have been performed for the past 40 years, and the results remain conflicting. Some studies show promise but have been small and poor in quality. When the results of several studies are combined, there has been some suggestion that chromium may lower fasting blood glucose and hemoglobin A1c levels; however, larger, better-quality studies are needed.3

Q: What types of cinnamon supplements are available?

A: Cinnamon is produced by drying of the inner bark of Cinnamomum trees.4 Although there are many species of Cinnamomum, the most commonly used species in studies has been Cinnamomum cassia. Different preparations of cinnamon are available commercially, including water-soluble extract of cinnamon rather than the whole spice. It is not known whether these different preparations have different, if any, antidiabetic effects.

Q: How might cinnamon affect patients with type 2 diabetes?

A: This is not yet known. The potential antidiabetic effects of cinnamon have been studied for more than 20 years. If cinnamon does decrease fasting glucose levels in patients with type 2 diabetes, it likely does so by decreasing insulin resistance. Cinnamon might increase insulin sensitivity and improve glucose uptake into cells. It may act in a similar way to medications already on the market such as thiazolidinediones (peroxisome proliferator-activated receptor [PPAR] agonists) or by decreasing inflammation.4,5 Most important, it may have very little or no antidiabetic effects.

A: The evidence supporting a role for cinnamon in type 2 diabetes is conflicting, most likely because of small sample sizes. Some studies have found that fasting blood glucose levels are decreased, and others have found no effect. Two meta-analyses have been done in the past few years. One of these found no effect, and the other showed a decrease in fasting blood glucose levels with the use of cinnamon.6,7 Dosing of cinnamon has varied widely, from 1 gram to 6 grams, and preparations of cinnamon have been different (extract vs whole spice). The population studies have also not been consistent and have included healthy subjects, persons with type 2 diabetes, and those with type 1 diabetes.4,6-8

Q: Should persons with type 2 diabetes take chromium or cinnamon?

A: Chromium shows some promise, but more evidence is needed to know whether it has a role in the treatment of type 2 diabetes. There is no evidence to show that chromium is useful in prediabetic states. At this time, there is not enough evidence to suggest that daily use of cinnamon supplements will improve glycemic control. Cinnamon and other spices and herbs are, however, great ways to flavor food and avoid salt or fats.

Finally, always remember to ask patients about any over-the-counter supplements that they are taking because some can have interactions with their medications.