Pulmonary embolism (PE) leading to cardiac arrest is often associated with extremely unfavorable outcomes. The reported cases of cardiac arrest with PE as the underlying cause are few, with most diagnoses made as unexpected autopsy findings. In rare cases, where diagnosis is made prior to death, there are interventional options.1 Current treatment options include catheter-directed mechanical thrombectomy,2 ultrasound-assisted catheter-directed thrombolysis,3-5 and catheter-based thrombolysis.

We present a unique case, a 76-year-old man who presented with cardiac arrest due to massive PE. The patient was stabilized after successful catheter-directed thrombectomy followed by catheter-based thrombolysis. The patient was discharged home without complication.

The patient was a 76-year-old man with a history of essential hypertension and benign prostate hyperplasia. He had been in his usual state of health but developed sudden-onset shortness of breath and subsequently became unresponsive. The rescue squad was activated, and the patient was found to be pulseless and breathless at his home. Cardiopulmonary resuscitation (CPR) and other resuscitation efforts resulted in the return of spontaneous circulation; however, his pulse was lost en route to the emergency department (ED), and CPR was repeated until the return of spontaneous circulation. 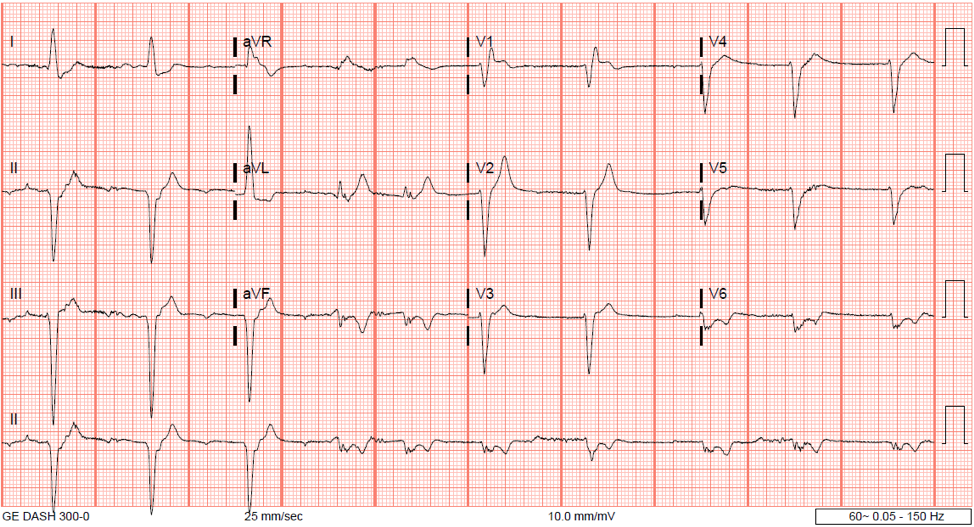 Figure 1. The patient’s ECG upon arrival at the ED showing escape rhythm with RBBB morphology. 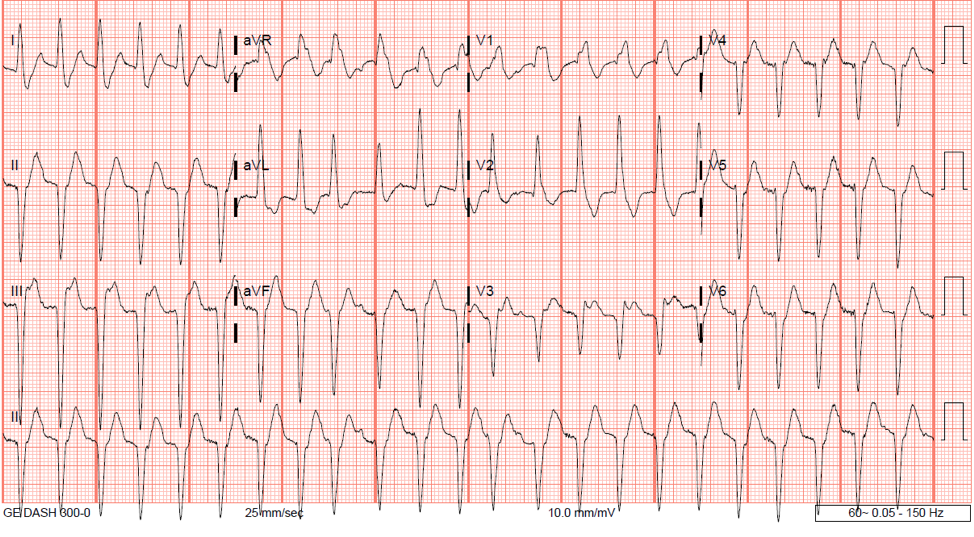 Figure 2. The patient’s ECG during resuscitation in the ED showing atrial fibrillation with rapid ventricular response and RBBB morphology. 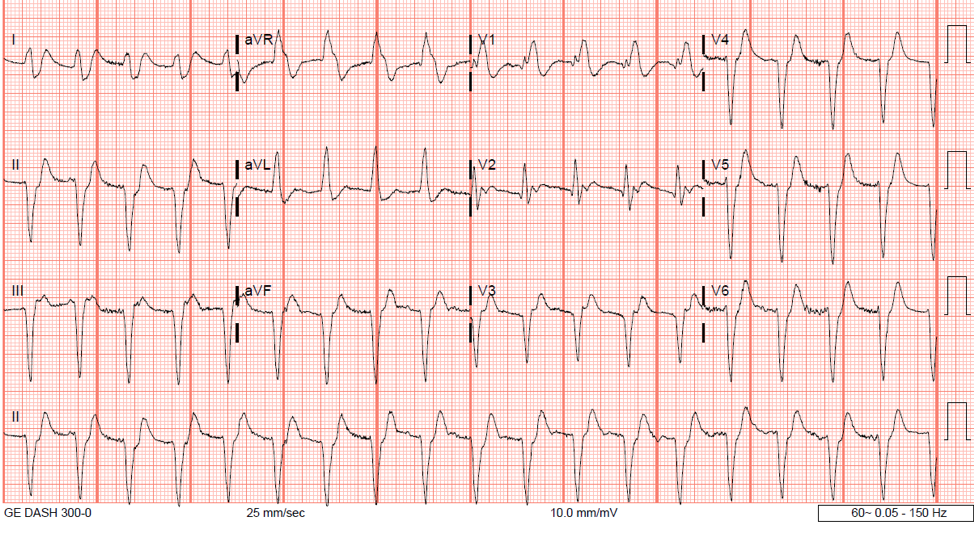 Figure 3. The patient’s ECG prior to transfer to the cardiac catheterization laboratory showing wide complex tachycardia in RBBB morphology.

Chest radiographs demonstrated the presence of an endotracheal tube with no evidence of pneumothorax; initial laboratory test results were pending at the time. Physical examination showed a cyanotic man with an endotracheal tube present, reactive pupils, bilateral rhonchi, tachycardia, undiscernible heart sounds due to underlying noise, and a soft abdomen. He moved his extremities in the presence of painful stimuli.

His heart rate had been ranging from 40 to 140 beats/min during resuscitation, and his blood pressure ranged from no pulse to 170/80 mm Hg. Due to the concern for a cardiac etiology of his cardiac arrest, the patient was transported to the cardiac catheterization laboratory while receiving CPR periodically.

In the catheterization laboratory, 6F sheaths were initially placed in the right femoral artery and the femoral vein. The left heart catheterization and coronary angiography were completed using JL4 and JR4 catheters, which revealed moderate disease—60% to 70% stenosis—at the left posterior descending artery. The left ventriculogram showed a hyperdynamic left ventricle with a small cavity. The patient’s left ventricular pressure was 60 mm Hg with end-diastolic pressure of 4 mm Hg. There was no transaortic valve gradient. Pressure was measured shortly after CPR and resuscitation.

During resuscitation, the patient required multiple rounds of CPR, epinephrine, norepinephrine, atropine, sodium bicarbonate, and calcium gluconate. An intra-aortic balloon pump (IABP) was placed; however, it failed to augment blood pressure, and CPR continued. It was at this point that PE was suspected. Subsequently, pulmonary angiography was performed using a 5F pigtail catheter placed in the main pulmonary artery using hand injection. It demonstrated that the left pulmonary artery’s main branch was thrombotically occluded (Video 1). The right pulmonary artery appeared to have flow.

The venous sheath was upsized to 7F, and a 7F JR4 guiding catheter was placed in the left pulmonary artery. A subsequent thrombectomy was performed using a 60-mL syringe, and a moderate number of clots were removed. The patient was still receiving CPR at this point. The femoral vein sheath was then upsized to 8F, and then an 8F JR4 catheter was used for additional thrombectomy, with moderate amounts of thrombus removed. At this time, the patient’s blood pressure was able to be maintained at 80/40 mm Hg with a mean pressure of approximately 50 to 60 mm Hg with 1:1 IABP augmentation. A 5F balloon-tipped pacing wire was placed in the right ventricle through left femoral vein access.

A 7F thermodilution Swan-Ganz catheter was placed in the left pulmonary artery, followed by 2 mg of tissue plasminogen activator (tPA, alteplase) given in a bolus. The bolus was followed by 1 mg/h infusion. The patient subsequently received systemic heparin and was transferred to the intensive care unit (ICU).

Upon arrival at the ICU, the patient was unresponsive, and his pupils were dilated, with minimal constriction to light. The patient initially required two pressors, epinephrine and phenylephrine, and later received iloprost.

The tPA infusion was stopped after 12 hours, and the patient was continued on heparin. The patient was taken off of pressors at 12 hours. The patient did have acute kidney injury, with creatinine peaking at 3.8 mg/dL, and evidence of a mildly shocked liver. Two-dimensional echocardiography showed normal left ventricular systolic function with a markedly dilated right ventricle, moderate right ventricular systolic dysfunction, and mild pulmonary hypertension (Video 2).

The patient’s IABP was removed 60 hours after the procedure, and he was extubated 72 hours after the procedure. Lower extremity ultrasonography showed the left femoral vein and popliteal vein with deep vein thrombus. On hospital day 9, the patient was discharged without neurological deficit, on warfarin and aspirin as anticoagulants, with the creatinine level at 2.5 mg/dL. Echocardiography 1 month after discharge showed normal right ventricular size and function with mild pulmonary hypertension (Video 3).

Cardiac arrest is due to the immediate cessation of the normal function of the heart and is typically associated with collapse, loss of consciousness, the absence of spontaneous respiration, and pulselessness. Cardiac arrest due to PE is an obstruction of major pulmonary arteries from massive embolus. When detected early, the fatality rate drops dramatically; however, the mortality rate can be as high as 90%, and often the diagnoses are made as unexpected autopsy findings. In most cases where PE was diagnosed as the cause of a cardiac arrest, patients typically presented with a unilateral swollen leg.1

In this case, the patient presented with acute dyspnea and cardiac arrest. He was cyanotic despite ventilation through an endotracheal tube. ECGs showed RBBB pattern; however, we did not have previous ECGs to compare. The patient was brought to the cardiac catheterization laboratory after the failure of prolonged CPR. Results of initial coronary angiography showed normal left ventricular systolic function without hemodynamically significant coronary artery obstruction. Due to ongoing electromechanical dissociation, despite IABP augmentation, systemic blood pressure could not be maintained.

PE arose as a possible etiology of cardiac arrest, which prompted us to perform pulmonary angiography and subsequent thrombectomy. The thrombectomy was performed successfully using large-bore JR4 (7F and 8F) interventional catheters, and further lysis of pulmonary clots was performed using catheter-based tPA, delivered locally via a Swan-Ganz catheter. In addition, a vasodilator, iloprost, was used in this case to reduce pulmonary artery pressure load on the right ventricle, which led to the patient’s quick recovery from cardiogenic shock, hepatic shock, and kidney failure.

Cardiopulmonary arrests frequently occur in patients with no significant coronary artery disease and normal left ventricular systolic function. PE as an etiology of cardiac arrest should be considered, and pulmonary angiography may provide an unforeseen diagnosis and save a patient’s life.

PE treatment has evolved rapidly from initial systemic administration of anticoagulant (heparin, enoxaparin) thrombolytics to new mechanical or ultrasound-assisted catheter-based thrombectomies and catheter-based thrombolysis.2-5 In our patient’s case, a thrombectomy was able to be performed successfully using large-bore JR4 catheters due to the lack of the most current interventional devices in the catheterization laboratory; however, it is likely not the optimal practice compared with newer mechanical or ultrasound-based devices. It would be ideal if all interventional cardiac catheterization laboratories contained up-to-date interventional devices designed for the treatment of massive PE; in addition, a standard postprocedure protocol for catheter-based thrombolysis is warranted.

A massive PE as the etiology of cardiac arrest should be considered in patients with normal left ventricular function without significant coronary artery obstructions in the absence of fatal arrhythmias. Pulmonary angiography and catheter-based thrombolysis/thrombectomy followed by local thrombolytic therapy could save the patient’s life. An interventional cardiac catheterization laboratory should have the capacity to perform catheter-based pulmonary thrombolysis/thrombectomy therapies.