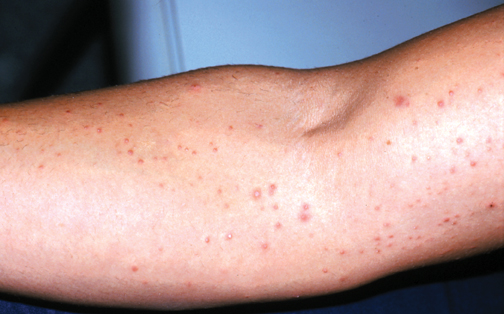 Erythematous folliculocentric papules were noted on the flexor aspects above and below the elbows of a 25-year-old man. The asymptomatic lesions were symmetric on both upper extremities and had been present for 2 and a half weeks. The patient reported that his arms had been exposed to rope fibers before the onset of this dermatitis. He was not taking any medications.

Because a bacterial infection was initially suspected, a culture of a lesion was performed and oral cephalexin was prescribed. After 1 week, the patient’s condition had not improved and the antibiotic was discontinued. The results of the bacterial culture were negative.

This rash is acneiform folliculitis, which mimics acne but contains no comedones. The eruption may be caused by a host of drugs, including bromides; hormones, including adrenocorticotropic hormone and androgens; corticosteroids; oral contraceptives; iodides; isoniazid; lithium; phenobarbital; and phenytoin. Abuse of anabolic steroids also has been reported as a cause.1 In this patient, exposure to rope fibers in conjunction with heat occlusion most likely precipitated the rash.

The standard treatment for acneiform folliculitis is an exfoliative agent and a topical antibiotic. In this patient, twice-daily applications of benzoyl peroxide and antibiotic ointment for about 7 to 10 days promptly resolved the lesions.