Management of Anaphylaxis in Infants and Toddlers: What Are We Missing in Practice?

Ortiz G. Management of anaphylaxis in infants and toddlers: what are we missing in practice? [published online March 9, 2018]. Consultant for Pediatricians.

The prevalence of food allergy and anaphylaxis is increasing in the United States, especially in young children. For children younger than 3 years of age, anaphylaxis may be poorly defined and underrecognized, and available pediatric epinephrine auto-injectors may not be safe for some in this age group because of their exposed needle length. Until recently, no epinephrine auto-injector had been approved for children weighing less than 15 kg, a group that includes many children younger than 3 years of age.

An estimated 5.9 million children in the United States have food allergies,1 and food allergy is the leading cause of anaphylaxis in young children.2 The prevalence of food-related anaphylaxis continues to grow, particularly in young children. From 1997 to 2007, the prevalence of food allergy increased by 18% in US children.3 More recently, from 2007 to 2012, emergency department (ED) visits for food-related anaphylaxis increased by more than 50% in children aged 6 months to 18 years (N = 7303).4 In Illinois alone from 2008 to 2012, there was an annual increase of 27.3% in ED visits and hospitalizations for food-induced anaphylaxis in children aged 0 to 4 years (n = 840).5 A more recent study showed that from 2005 to 2014 ED visits for anaphylaxis, from any cause, increased 129% in children aged 0 to 5 years.6 Importantly, 84 deaths from anaphylaxis from any cause in children aged 17 years or younger were reported in a 2014 study using data from 3 national databases.7 These data suggest that life-threatening allergies continue to be a problem in the United States.

The most common food triggers of anaphylaxis in infants are cow’s milk, eggs, and peanuts.1,8 Other important triggers include Hymenoptera venom, latex, and medications such as β-lactam antibiotics and nonsteroidal anti-inflammatory drugs. Identifying the inciting allergen is critical to establishing allergen-avoidance strategies and the prevention of future anaphylaxis events.

Infants and toddlers are not able to use language to describe their symptoms, so awareness of overt vs nonspecific signs is critical to identifying anaphylaxis (Table 1).10 For example, changes in skin color and subtle behaviors such as scratching and drooling may signify anaphylaxis in some cases.9 In other cases, behaviors such as irritability, inconsolable crying, dysphonia, drooling, regurgitation, and urine and stool incontinence may also signify anaphylaxis.8 However, many of these are normal behaviors at that age. A consensus on the criteria for infant and toddler anaphylaxis is necessary to aid health care providers in identifying and diagnosing this life-threatening condition. 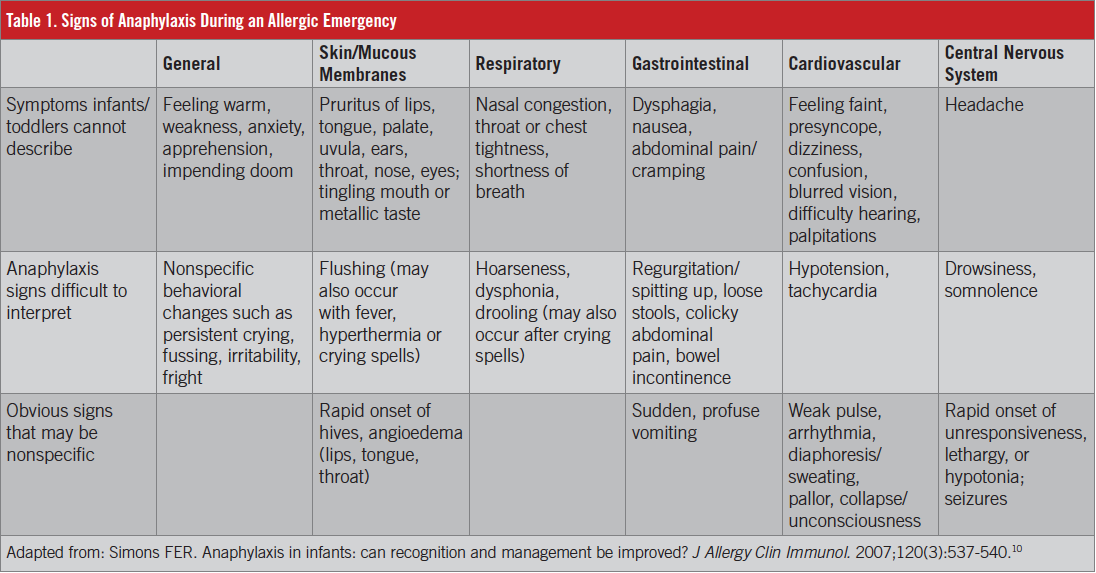 For an allergic emergency, epinephrine should be administered immediately, followed by a call for emergency medical services and transport to the hospital.11 Although no dose-response studies have been published using epinephrine in children less than 15 kg, the recommended weight-based dosing of epinephrine in this population is 0.01 mg/kg.11 For example, the appropriate dose for a 10 kg child is 0.1 mg. Currently available pediatric epinephrine auto-injectors contain epinephrine at a dose of 0.15 mg and are indicated for children weighing 15 to 30 kg. This dose may be too high for some children weighing less than 15 kg. For example, a child weighing 5 kg who is administered a 0.15 mg dose of epinephrine would be receiving a 3-fold higher dose than recommended.8 However, many pediatric health care providers use 0.15 mg pediatric epinephrine auto-injectors in children less than 15 kg.12 The rationale for the use of these devices includes that (1) the benefit of using epinephrine at this dose during an allergic emergency outweighs the risk for short-lived adverse effects (eg tachycardia, pallor, nausea) of the drug itself, (2) parents are not able to accurately draw up an infant dose of epinephrine from an ampule to deliver it manually by syringe, and (3) there has been no other therapeutic option for children weighing less than 15 kg.13

The 3 currently available 0.15-mg pediatric epinephrine auto-injectors (EpiPen Jr, Adrenaclick 0.15 mg, and Auvi-Q 0.15 mg) are approved by the US Food and Drug Administration (FDA) for children weighing 15 to 30 kg. Sometimes, these devices are used off-label for patients who weigh less than 15 kg. However, the use of available 0.15-mg pediatric epinephrine auto-injectors in children weighing less than 15 kg may be considered controversial because of the dosing issue discussed above and their exposed needle length.14,15

Furthermore, lacerations and embedded needles have been reported in infants and toddlers using the EpiPen Jr.18 As a result, package inserts of pen-style epinephrine auto-injectors were updated in 2016 to include the following language: “Hold leg firmly during injection. Lacerations, bent needles, and embedded needles have been reported when [EpiPen, EpiPen Jr, and Adrenaclick] have been injected into the thigh of young children who are uncooperative and kick or move during an injection.”

Parents and caregivers should be cautious and use compassionate restraint when securing a child and his or her leg during an injection. Techniques to secure children during an injection with an epinephrine auto-injector have been previously reported.19,20

Health care providers should be familiar with the attributes of each device they prescribe, specifically their safety features (Table 2). Pen-style epinephrine auto-injectors have similar attributes and functionality but differ in their steps to activation, safety features, and recommended hold times in the patient.

Adrenaclick devices have an extra cap to remove before injection, are not equipped with a needle guard after withdrawal from the patient and have a 10-second hold. EpiPen devices do not have an extra cap to remove, have a needle guard once the needle is removed from the thigh, and have a 3-second hold. Recently, the Auvi-Q has been brought back on the market and has been engineered differently than pen-style epinephrine auto-injectors. Auvi-Q has audio and visual cues to assist caregivers, guardians, or patients during an allergic emergency; an automatic retractable needle; and a 2-second hold.

A new epinephrine auto-injector, the Auvi-q, with an epinephrine dose of 0.1 mg and needle length of 0.29 inches was approved by the FDA for children weighing 7.5 to 15 kg.

In infants and toddlers, the prevalence of food allergy and anaphylaxis continues to grow. In turn, there has been a significant increase in ED visits and hospitalizations for anaphylaxis in this population. Familiarity with the signs and symptoms of anaphylaxis in this patient population will help improve diagnosis as well as timely, appropriate treatment. Right now, the needle length of 0.15-mg pediatric epinephrine auto-injectors may not be suitable for children weighing less than 15 kg due to the risk for accidental bone injections. The recently approved epinephrine auto-injector for children weighing 7.5 to 15 kg has a shorter needle length, which may help to address this issue. It might be expected that properly securing a child and his or her legs prior to injection; using a device with an automatically retracting needle; and minimizing device hold time in the leg may prevent some epinephrine auto-injector–related injuries.

Medical writing support was funded by kaléo. The funder had no role in the development or approval of this publication.