Antidepressants that ease symptoms of depression but introduce sexual dysfunction are problematic for many patients. In the experience of Anita Clayton, MD, those who develop treatment-emergent sexual dysfunction tend to react in 1 of 3 ways.

Some will march into the office and declare they’re not taking the drug anymore. “Men are more likely to do that, especially if it’s related to erectile dysfunction,” said Dr. Clayton, professor and chair of the department of psychiatry and neurobehavioral sciences at the University of Virginia in Charlottesville. Others will stop taking the medication without telling their provider. And still others will continue to take the medication, and suffer in silence.

Sexual dysfunction doesn’t have to be a treatment-breaker, though. Nor must the side effect represent a new normal patients ought to just accept.

Dr. Clayton will review strategies to alleviate treatment-emergent sexual dysfunction during a session she will present at Psych Congress on October 5.

“It’s important for providers to have a good knowledge of sexual function and sexual dysfunction with depression and with antidepressant treatment, in order to best treat their patients,” she said. 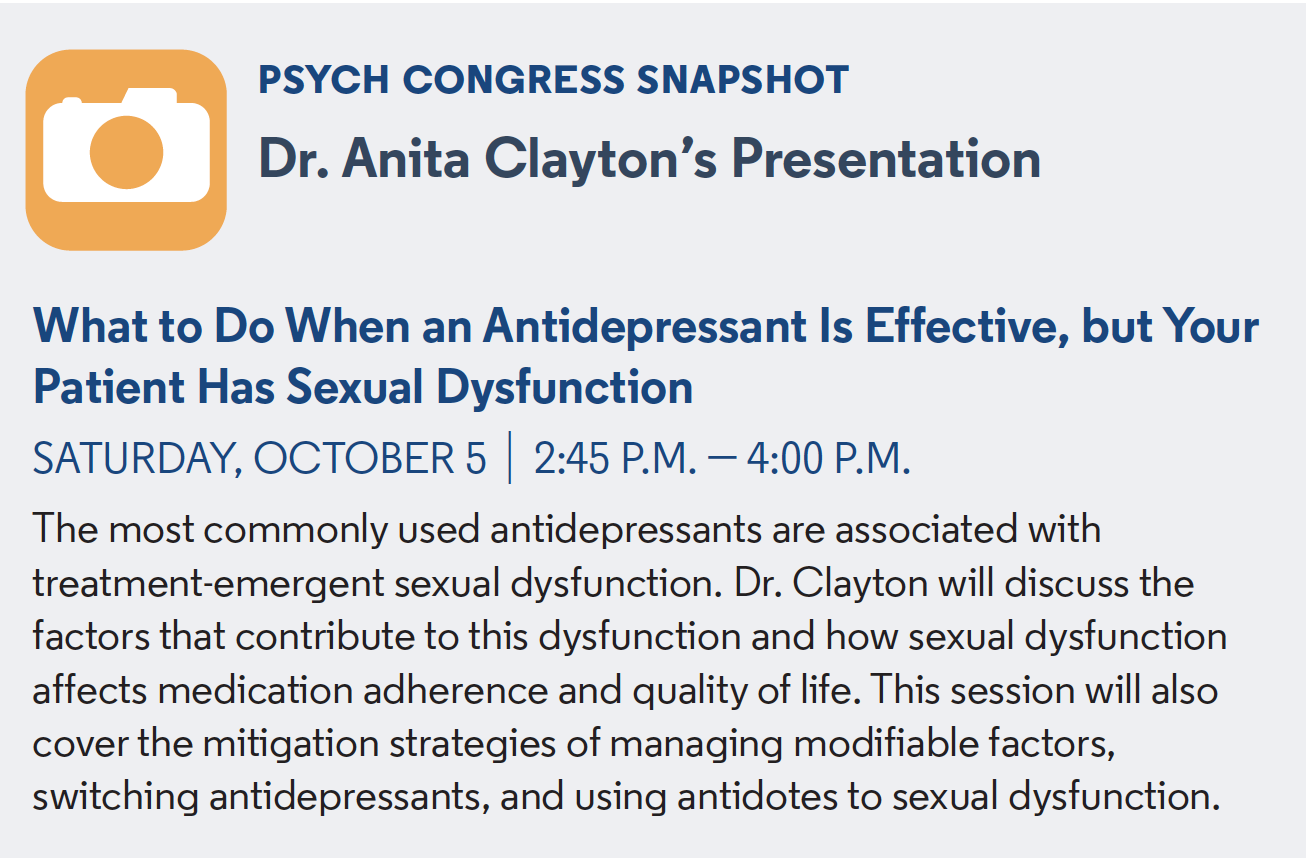 “With the SNRIs duloxetine and desvenlafaxine, there's more of a balance between serotonin and norepinephrine function, so sexual functioning is usually a bit better,” she said.

Antidepressants with mechanisms of action separate from or in addition to the serotonin system are much less likely to cause sexual dysfunction, according to Dr. Clayton. Bupropion, mirtazapine, and multimodal antidepressants fall into that category.

Prescribers should address sexual function from the moment a patient indicates a willingness to take an antidepressant as part of their treatment plan and through their most recent follow-up appointment. Dr. Clayton usually presents 2 medication choices, reviewing all potential benefits and side effects of each before the patient selects one.

The validated Changes in Sexual Functioning Questionnaire (CSFQ) that Dr. Clayton helped create gauges both illness- and medication-related changes in sexual function. Tools such as the CSFQ or the Arizona Sexual Experiences Scale can be a nonthreatening way to introduce the topic.

“People are willing to talk about it but they’re not that willing to bring it up with their provider,” Dr. Clayton said. “Often patients won't bring up the topic of sexual dysfunction because they think there's no intervention available to help them. Or they think their provider will be embarrassed and uncomfortable by the fact they brought it up.

“So, really, it's the provider’s responsibility to ask patients about it and say, ‘You have permission to talk about this. We're going to review this because this is a credible area for us to manage.’ ”

When patients indicate problems with sexual functioning, options for addressing it include switching antidepressants and adding a potential antidote such as buspirone (although the use would be off-label, Dr. Clayton pointed out) to reverse sexual side effects. If a patient isn’t particularly bothered by a change in sexual function and the antidepressant is otherwise working, waiting is another option, since up to 10% of patients become tolerant of the side effect.

Providers should caution patients against skipping doses or going on drug holidays in anticipation of sexual activity.

“When people don’t take their medication over the weekend because they want to have sex, that can lead to nonadherence,” Dr. Clayton said, “because what’s going to happen if they want to have sex on Tuesday? They’re not going to take it in the beginning of the week either, and that can affect their well-being.”

Finally, Dr. Clayton cautioned prescribers to avoid making assumptions about a patient’s interest, or lack thereof, in treatment-emergent sexual dysfunction based on age, relationship status, or other factors.

“People's sexual lives are important to them,” she said. “And when they are impacted, people develop a lot of negative feelings, including a decreased sense of self-worth or a diminished sense of who they are as a person, which affects their life satisfaction.”