The goal in managing many musculoskeletal injuries is now early mobilization-not immobilization. This shift in emphasis encompasses injuries ranging from a strained back to a sprained ankle. Patients with sciatica who previously might have been kept at bed rest for several weeks are now encouraged to avoid bed rest and to alleviate nerve irrita- tion with positional exercises. Similarly, patients with ankle sprains gain faster pain relief and recover function more rapidly when cast or splint immobilization is avoided. Early mobilization is appropriate for many acute injuries without risk of significant bone or joint instability. Its advantages have emerged as the many detriments or hazards of even brief periods of immobilizing muscles, joints, and bones have become apparent. In the following pages, I present cases that clearly demonstrate the risks of immobilization. Several of these cases underscore the dangers of immobilizing injured soft tissue, which continues to swell after a cast or splint has been applied.

Wrist injury. Problems in the wrist can occur when a displaced distal radial fracture or Colles fracture is treated in a cast with the wrist in maximum flexion to hold the reduction. As the photograph shows, this can cause both compression of the median nerve that leads to carpal tunnel syndrome and, occasionally, a compartment syndrome with subsequent impairment of the intrinsic musculature of the hand. Immobilization of this patient's wrist in a hyperflexed position for a Colles fracture resulted in atrophy of the thenar muscles, with some loss of hand function. The acutely fractured distal radius is best immobilized in a temporary splint with minimal wrist flexion until the acute swelling subsides. At that point, you can safely apply a circular cast that maintains reduction without hyperflexing the wrist and risking nerve or muscle damage. 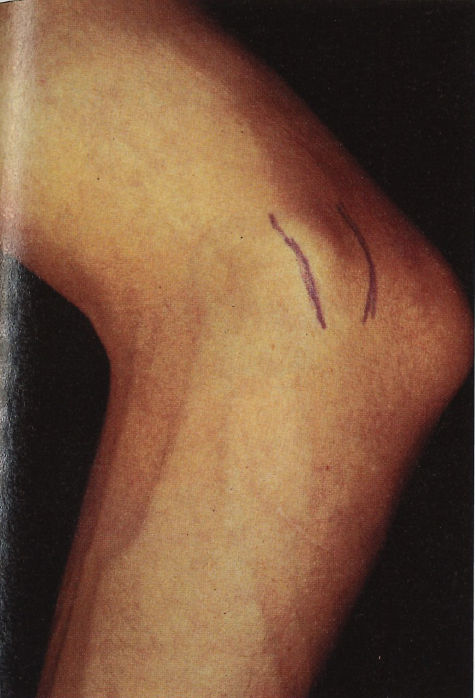 Elbow injury.  Ulnar nerve problems can occur when the elbow is immobilized in flexion beyond a right angle (ie, less than 90 degrees). This can compress the ulnar nerve as it travels through the cubital tunnel, a problem especially likely if the ulnar nerve is relatively mobile and moves up against the epicondyle, as it did in this patient who had sustained a radial fracture.

The consequence is usually a temporary ischemic neuropathy of the sensitive ulnar nerve that causes weakness of the intrinsic muscles of the hand supplied by the nerve. 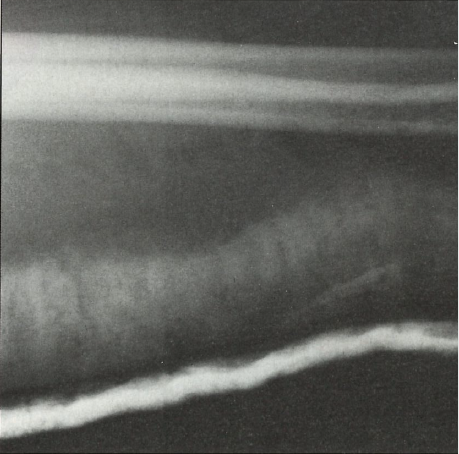 Forearm injury. Infection of the "simple" open fracture of the distal radius is a significant- but fortunately rare-complication of immobilizing musculoskeletal injuries of the upper extremity. Clinicians often underestimate the extent to which this type of fracture can be contaminated, particularly if the patient presents with a small puncture wound directly over the fractured distal radius that conceals the degree of contamination at the fracture site.

If open fractures of the distal radius are simply washed out in the emergency department and temporarily splinted, overwhelming sepsis from clostridial myonecrosis may develop, leading to amputation. Such was the case with this patient, who had a "minor" open puncture over the fracture site. Clostridial (gas gangrene) infection occurred within 3 days after the injury and eventually necessitated amputation above the elbow.

The lateral film shows air in the forearm, with evidence of gas gangrene. This case illustrates that even minor open fractures or musculoskeletal injuries can be a source of significant complications. Such injuries need to be treated with complete surgical debridement in the operating room.

NEXT: INJURY FROM PLASTER OF PARIS SPLINTS 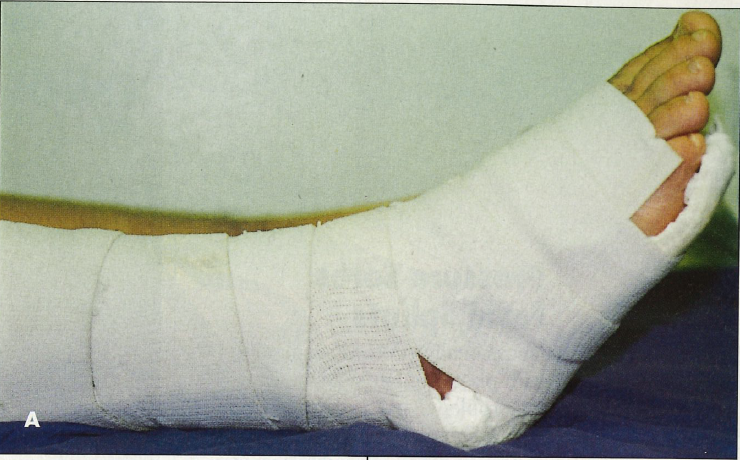 Injury from plaster of paris splints. These temporary splints are associated with special complications related to both the action or condition of the patient and the nature of the splint itself. At our orthopaedic clinic, we commonly see patients who have been referred from the emergency department in a temporary splint after a minor ankle sprain or a fracture of the lateral malleolus.

If the patient allows the foot to hang in a nonfunctional position without weight bearing, the injured ankle may swell like a sausage. This patient's ankle was splinted in a severe equinus after a minor ankle sprain (A).

After the splint was removed 3 days after injury, extensive swelling from the dependent position of the foot became evident (B). To avoid such problems, immobilization with an air splint is preferred for most acute or subacute sprains and nondisplaced fractures of the ankle (C). 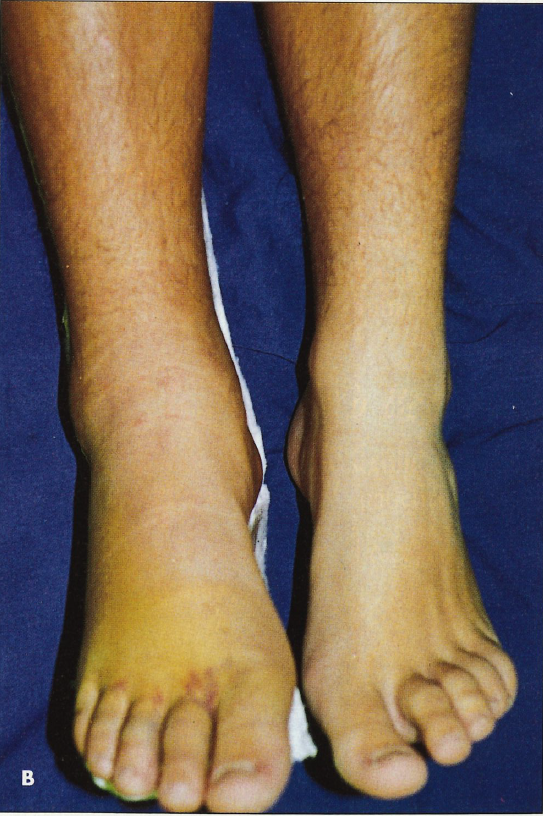 NEXT: THERMAL BURNS FROM PLASTER SPLINTS 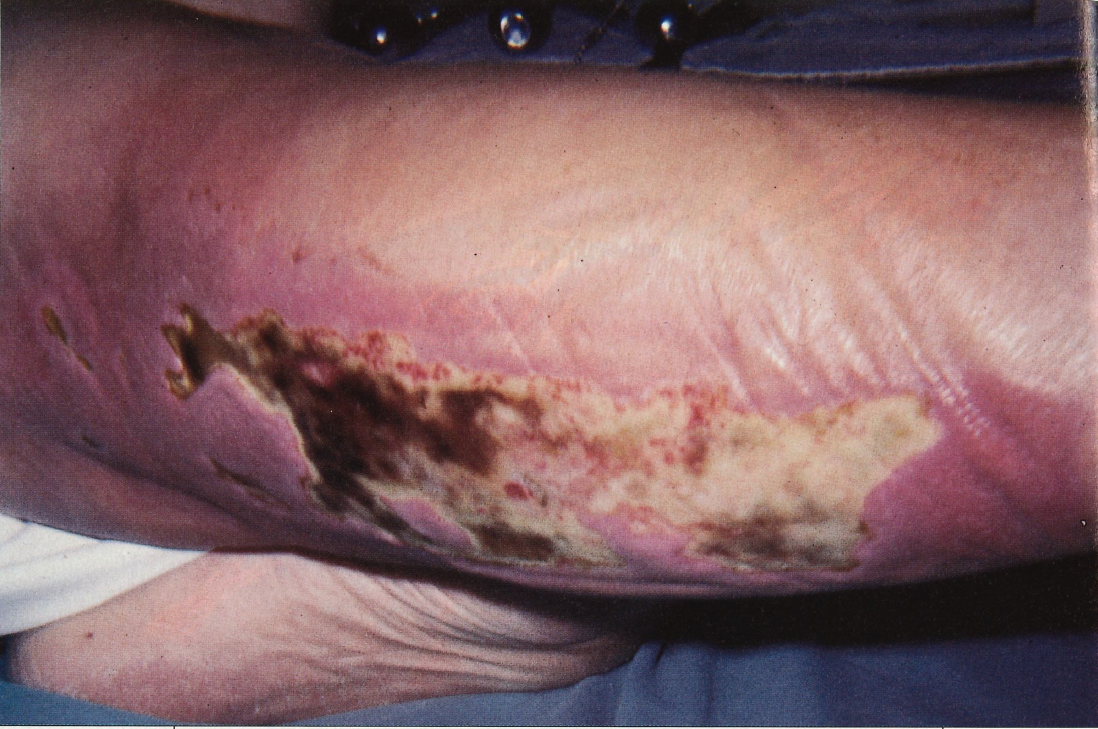 Thermal burns from plaster splints. Plaster of Paris itself can be hazardous because of the thermal reactions that occur as the material sets. When water is added to plaster of Paris powder, the water molecules go from a liquid to a solid state by incorporating into the crystal lattice of the calcium sulfate hemihydrate.

This converts kinetic energy into heat. If hot water is applied to plaster of Paris to begin this kinetic process, the heat given off from the resulting crystallization can actually burn the patient's limb. Such was the case in this patient, who sustained a third-degree burn to the back of his calf after his limb was splinted with plaster made with hot water.

The combination of the hot water and the heat from the plaster's crystallization resulted in this soft tissue injury, which required several plastic surgery procedures for coverage. When applying a plaster of Paris splint or cast, be sure to keep the water at room temperature or at a temperature that allows you to immerse your ungloved hand without any discomfort.