What Is This Penile Lesion?- Answer

Prognosis and treatment were discussed with the patient and his family. Hospice was chosen. He died shortly thereafter.

Risk factors for penile cancer include the following1,2: 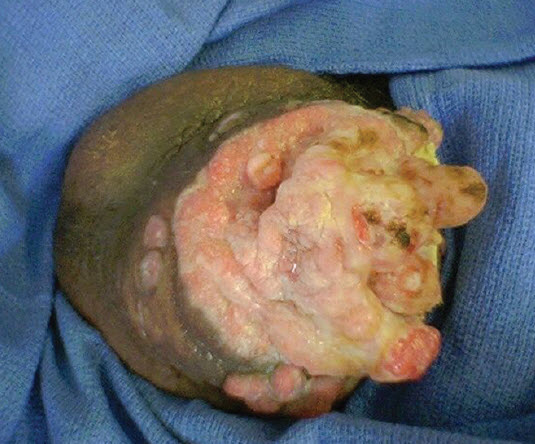 Premalignant conditions, such as condylomata, may herald the development of penile cancer.

Select treatments for earlystage disease (carcinoma in situ)— such as 5-fluorouracil, topical interferon, and photodynamic therapy—have been beneficial. A helpful rule in primary care is to obtain a biopsy for all penile lesions that raise suspicion of malignancy as well as all lesions initially considered to be infectious that do not respond to antibiotics. If the diagnosis is made earlier in men with condylomata or other premalignant lesions, the prognosis is better.

Since the growth pattern of this patient’s tumor was indolent (enlarging over 20 years), the mass was initially thought to have been a genital condyloma consequent to HPV infection. Histopathological examination confirmed this suspicion. Inspection of the excised tissue under microscopy revealed marked koilocytic (ballooning) changes in penile squamous cells, which identified this patient’s lesion as the “warty,” or condylomatous, tissue subtype. This subtype is slow-growing and cauliflower-like in appearance; it is associated with HPV infection and accounts for about 10% of all penile carcinomas. It may be distinguished from papillary carcinoma (another important subtype) by the presence of koilocytes.3 The prognosis for patients who have such tumors is generally good—if the lesions are discovered early.