For years, a 46-year-old African American woman had had progressive weight gain (despite a low-calorie diet), fatigue, and severe muscle cramps. On examination, Mandeep Hundal, MD, Rashid Khan, MD, Rajeev Garg, MD, and Niraj Mehta, MD, of the University of Texas Health Science Center at Houston, noted symmetrically distributed fatty lumps in the patient's neck, axillary and mammary regions, and proximal segments of the arms and legs. These findings are characteristic of Madelung disease, which is also known as multiple symmetric lipomatosis (MSL) or Launois-Bensaude syndrome. 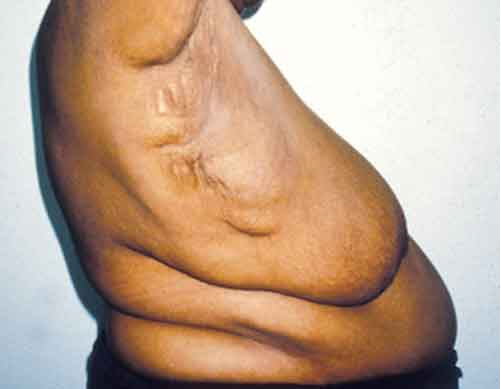 Unlike common lipomas, the benign, fatty masses of MSL are not enclosed within a membranous capsule; because of this characteristic and the absolute symmetry of the masses, the condition is often dismissed as obesity. The disease is more frequently diagnosed in the Mediterranean region, where the incidence is 1:25,000. It usually occurs in men with high alcohol intake.

This patient had the most common variant of the disease, type I, which is characterized by circumscribed, symmetric masses in the upper body that frequently affect mediastinal and intrathoracic structures. The lipomas in type I MSL appear most often in the neck and nucha, shoulders, axillary and mammary regions, and proximal segments of the arms and legs.1 The distal parts of the arms and legs are generally spared.

The pathogenesis of MSL is unknown, although it may originate in brown adipose tissue, which produces heat in response to cold exposure or after eating.3 This mechanism seems to be defective in MSL adipocytes, prompting an accumulation of lipids.4-6

The location of the masses, a history of weight gain even with reduced calorie intake, extreme fatigue, myalgia, hypersensitivity to touch or minor trauma, weakness of the extremities, and severe unexplained cramping over the sites where the lipomatous masses commonly develop signal the need for further investigation. Blood study results are usually normal. CT and MRI (in particular) demonstrate the presence of the masses. Biopsy of a fatty mass with underlying muscle tissue, and the identification of specific pathology in both, confirms the diagnosis. In this patient, biopsy results showed nonencapsulated adipose tissue between the collagen fibers; in some areas, the tissue extended to the most superficial zones of the reticular dermis.

In many cases, surgical intervention is complicated because the nonencapsulated lipomas tend to invade the surrounding tissue and structures. After debulking surgery, the tumors may recur within a short period. Liposuction is another option, although it is recommended only for those who have had the surgery. This patient refused surgery. *