Why Does This Healthy Adolescent Have Chest Pain?

A previously healthy 17-year-old boy presented to the emergency department (ED) of a referral hospital with a 1-day history of chest pain. The chest pain was described on a pain scale as 7/10, was nonradiating, and was associated with dizziness, diaphoresis, and self-resolving palpitations. The pain was exacerbated by deep inspiration and had no relieving factors.

The patient said that he was a high school football player who routinely participated in isometric exercise training. He denied recent chest wall trauma or alcohol or illicit drug use, and he did not recently have prolonged periods of immobility. His vital signs revealed tachycardia of 115 beats/min, temperature of 36.6°C, respiratory rate of 12 breaths/min, blood pressure of 110/70 mm Hg, and oxygen saturation of 98% by pulse oximetry.

He had a sthenic body habitus with a body mass index of 31.44 kg/m2, which was at the 97th percentile for his age. His precordium was not hyperactive, and his jugular venous pulse was not elevated. The first and second heart sounds were unremarkable, and there was no murmur. In addition, his lung fields were clear to auscultation, the abdominal examination was benign, and there was no lower extremity swelling or calf tenderness. His troponin I level was 0.78
ng/mL (reference range <0.04 ng/mL) and his  electrocardiogram (ECG) results revealed sinus tachycardia (Figure 1).

The boy was given ibuprofen for pain and transferred to our institution’s pediatric intensive care unit. He did not have any further chest discomfort, and the only remarkable finding was tachycardia with heart rate of 110-120 beats/min. His troponin I level decreased to 0.21 ng/mL within 24 hours of admission. 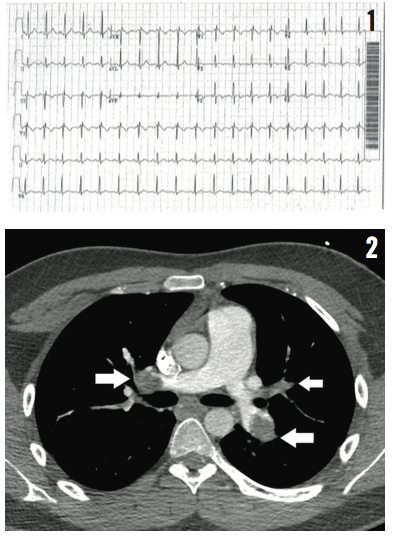 What is causing this boy's symptoms?

(Answer and discussion are on the next page)

The results of the chest CT revealed massive bilateral pulmonary saddle emboli at the bifurcation of the left and right pulmonary arteries with partial extension into the segmental and subsegmental pulmonary arteries (Figure 2). Lower extremity Doppler did not reveal deep vein thrombosis (DVT). The boy was started on a 1 mg/kg dose of enoxaparin twice daily. The results of a hypercoagulation workup were noncontributory, and follow-up chest CT results revealed resolving pulmonary embolism.

Researchers have found that 98% of children with VTE have a history of risk factors,3  which can include malignancy, congenital heart disease, trauma, surgery, prolonged immobility, renal diseases, coagulopathies, use of oral contraceptives, and obesity.1,4,5 The most common cause of DVT in children is the presence of central venous lines.5  Though there are reports that 30% of DVT in adults is idiopathic, the comparable rates are only 2% to 4% in children.4,6  We did not find any risk factors for DVT in our patient based on history, physical examination, and diagnostic testing results.

Our patient did have chest pain, which is a common symptom in the pediatric population and has a broad differential diagnosis. The associated symptoms of diaphoresis, dizziness, and palpitations suggested a cardiac etiology leading to a cardiology consultation, including an echocardiogram. Chest pain, dyspnea, cough, and hemoptysis are the most common symptoms and signs of pulmonary embolism in children,5,7-9 and tachypnea is the most important indicator of pulmonary embolism among children.3,5  Many of these symptoms can also be seen with common pediatric respiratory problems and, as a result, clinical diagnosis is challenging and may be delayed or missed.

A literature review suggests that presumptive diagnosis of pneumonia is the most common cause for a delay in diagnosis of pulmonary embolism for up to 3 weeks.10  In adult patients, the Wells Criteria for pretest probability of pulmonary embolism and the Pulmonary Embolism Rule-out Criteria help guide adult emergency medicine physicians in diagnosing the condition,11,12  but there are no such guidelines for pediatric patients. The diagnosis in pediatric patients is made more difficult because individual signs and symptoms have low sensitivity and specificity for predicting pulmonary embolism.13

Moreover, adolescents have been described as showing a decreased frequency of symptoms.8  In our patient, the only presenting symptom was chest pain that resolved with one dose of a nonsteroidal anti-inflammatory medication. This chest pain could have been easily mistaken for musculoskeletal pain in a healthy, athletic adolescent.

The only presenting sign in our patient was persistent tachycardia. Sinus tachycardia should always be evaluated to rule out cardiac and pulmonary disease. An elevated troponin level is often seen in the setting of myocarditis, but the elevated troponin level in our patient did not account for the echocardiographic findings of right ventricular dilation and pulmonary hypertension. Significant obstruction to pulmonary flow with saddle embolism can raise right ventricular afterload, which can eventually result in decreased cardiac output, shock, and reduction in coronary artery perfusion.14

Lung ventilation-perfusion scintigraphy is a safe and sensitive study for pulmonary embolism in children, but it may not be diagnostic, especially in patients with cardiac and pulmonary pathologies. Echocardiogram may be helpful in illustrating right ventricle strain, as seen in our patient.10

In recent years, pulmonary CT angiography has become the first line of diagnostic testing for pulmonary embolism.15,16 The criteria for diagnosis of acute pulmonary embolism include complete or partial pulmonary artery filling defects, as seen in our patient. These filling defects may present either as a “doughnut sign” in cross-sectional views or  as the “railroad track sign” in longitudinal visualization of the occluded vessel. Right ventricular enlargement and its ratio to the left ventricle dimension is an important prognostic factor.17 Although pulmonary CT angiography is noninvasive, it exposes children to ionizing radiation, which has its own risks to consider.5,10

Pediatricians and emergency medicine physicians should be cognizant of the signs and symptoms of pediatricpulmonary embolism. The condition is not a common occurrence in children, and signs and symptoms can be subtle, as seen in our patient. Our patient’s chest pain resolved with only one dose of ibuprofen, so the diagnosis could have been missed if a search for an etiology of his persistent tachycardia was not pursued.

Pulmonary emboli can be fatal or have long-term consequences affecting a child’s quality of life. The prognosis of pediatric pulmonary embolism is dependent on having a high index of suspicion with appropriate diagnostic evaluation and subsequent treatment.