What Conditions Are Affiliated with Rheumatoid Arthritis?

This rash erupted on the upper body of a 58-year-old woman in late August. It was mildly pruritic and nontender. The patient had not started any new medications and was not taking photosensitizing drugs. She had Sjögren syndrome; the rest of her history was noncontributory. Subacute cutaneous lupus erythematosus (SCLE) was diagnosed. 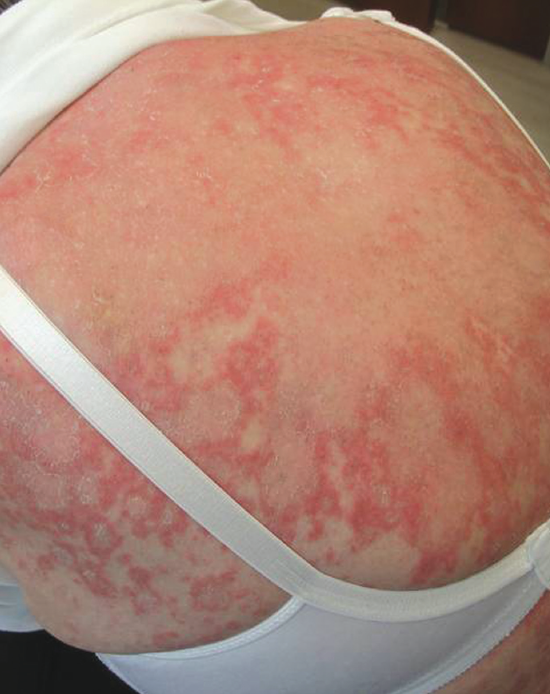 SCLE typically affects white women aged 30 to 40 years.1 It presents as nonindurated, nonscarring, erythematous plaques with or without a fine scale that may progress into a diffuse, widespread, papulosquamous or annular lesion with central hypopigmentation or telangiectasia.1

SCLE characteristically appears on sun-exposed areas (eg, the vee area of the neck; upper trunk; extensor aspects of the shoulders, arms, and forearms; dorsa of the hands and fingers) but spares the knuckles and the face. SCLE is associated with other rheumatological diseases, such as rheumatoid arthritis and Sjögren syndrome, and certain medications, such as hydrochlorothiazide.2 The disease is predictably worse during the spring and summer and may be exacerbated by photosensitizing drugs.

Shown here are the left hands of 2 women who had been outside together on a cold Indiana afternoon. The 40-year-old woman's hand on the right demonstrates typical findings of primary Raynaud phenomenon. Her fingers turned white (as shown), then blue, then red. They were quite painful. The hand of her friend is shown for comparison.

The blanching and numbness or pain is caused by exaggerated vasoconstriction in response to cold. In addition to the fingers, the toes, ear lobes, and tip of the nose can be involved. Those with Raynaud phenomenon may have underlying disease, such as scleroderma, lupus, rheumatoid arthritis, Sjögren syndrome, or carpel tunnel syndrome; however, this is rare. 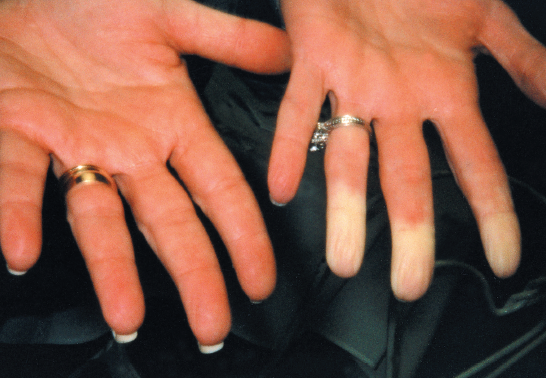 Avoidance of cold is recommended. In patients who have significant pain and numbness, a calcium channel blocker may decrease the severity of the vasoconstriction.

This patient's symptoms resolved after 20 minutes of hand warming. ■

Cough, Chest Pain, and Dyspnea in a Woman With
Rheumatoid Arthritis

A 40-year-old Hispanic homemaker is admitted with a 3-week history of high fever, chest pain, and a dry, irritating cough.

Her illness began insidiously with increasing right upper chest pain that is sharp, pleuritic, and rates a 6 on a pain scale of 1 to 10. The pain is associated with temperatures of up to 38.8°C (102°F) and chills, rigors, and profuse sweating that increase in the evening. Worsening dyspnea has been accompanied by a drop in effort tolerance.

The patient was seen at a local urgent care center and treated with levofloxacin for a week. A chest radiograph showed infiltrates in the right upper lobe. The symptoms worsened and the medication was switched to clarithromycin, but there was no marked improvement.

The patient has a history of rheumatoid arthritis (RA) and has been under the care of a rheumatologist. Initially, she was treated with ibuprofen, then with corticosteroids and hydroxychloroquine. During the past 12 months, she has received a weekly injection of infliximab. No tuberculin skin test was done before the initiation of infliximab therapy because the patient told the rheumatologist that results of a tuberculin skin test the year before were negative. 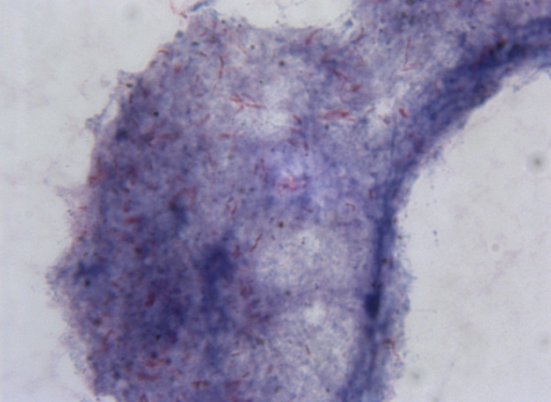 The patient's appetite is poor and she has lost 6 lb in the past 3 weeks. She denies hemoptysis, palpitations, ankle edema, lymphadenopathy, rash, and joint swelling. She has no history of nausea, vomiting, diarrhea, abdominal pain, jaundice, hematemesis, melena, headache, vision problems, seizures, syncope, weakness, paresthesias, urinary symptoms, or bleeding diathesis.

Both of her parents have type 2 diabetes; a younger brother has bronchial asthma. The patient smokes half a pack of cigarettes a day; she does not drink alcohol or use illicit drugs. She is sexually monogamous. She visited her grandparents in Mexico for 2 weeks a year ago.

Heart rate is 122 beats per minute and regular; temperature, 38.8°C (102°F); respiration rate, 24 breaths per minute; blood pressure, 118/68 mm Hg. Her weight is 104 lb. Hydration status is good. Examination of the head and neck shows no icterus, erythema, or evidence of candidal infection. The mucosa and skin are pale; there are no rashes or tattoos. There is no palpable lymphadenopathy or ankle edema; the thyroid is not palpable. Chest movements are symmetric and equal bilaterally. The trachea is centrally located and the chest is resonant to percussion. Breath sounds are harsh in the right upper zone and coarse rales are heard. The jugular venous pressure and heart sounds are normal. The abdomen is soft and nontender with no organomegaly or fluid. Results of a neurologic examination are normal.

A chest radiograph and sputum evaluation for acid-fast bacteria (AFB) are ordered. 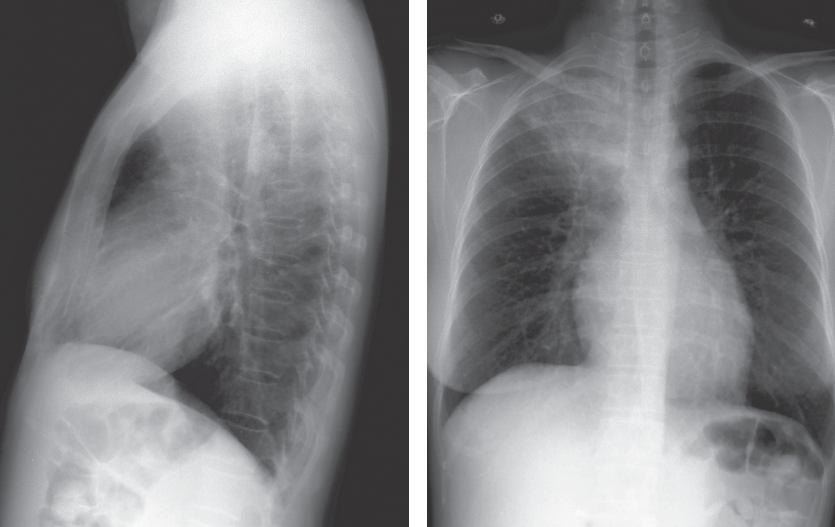 Diagnosis. The pathogenesis of rheumatoid disease progression involves high concentrations of tumor necrosis factor (TNF), the central component in the cascade of cytokines induced in RA that stimulates production of additional inflammatory mediators such as chemokines, prostaglandins, proteases, and growth factors that activate neutrophils, ß cells, and endothelial cells.

The TNF inhibitors infliximab, etanercept, and adalimumab are widely used to reduce the erosive damage of RA. TNF inhibitors are usually given to patients with active, progressive RA who have not responded satisfactorily to one or more conventional disease-modifying antirheumatic drugs, such as methotrexate, sulfasalazine, hydroxychloroquine, and cyclosporine.

Although the TNF inhibitors are effective, neutralization of TNF significantly suppresses the immune response. This has led to an increased risk of such infections as tuberculosis (TB), Pneumocystis infection, and disseminated histoplasmosis.

About half a million patients have undergone TNF therapy; mycobacterial infections have been reported in about 300 of these. Most infections appear in the first 6 to 8 months of treatment.

Extrapulmonary presentations, which have been reported in 30% to 50% of cases, include fever of unknown origin, miliary TB, TB-associated lymphadenopathy, peritonitis, enteritis, meningitis, and vertebral and bladder disease.

A high index of suspicion is warranted. The diagnosis is confirmed by demonstration of AFB either in biopsy material or sputum, in conjunction with sputum culture. Chest radiography or CT can be helpful.

Once the diagnosis is established, prompt and aggressive therapy is started with isoniazid, rifampin, ethambutol, and pyrazinamide. The regimen is continued for 2 months, followed by isoniazid and rifampin therapy for an additional 7 to 10 months.

Discussion. According to American Thoracic Society and CDC guidelines, patients with active RA who are being considered for TNF inhibitor therapy may be at high risk for TB and should undergo tuberculin skin testing.1 Induration of more than 5 mm is considered a positive result. Antituberculosis prophylaxis should be considered for any high-risk patient before TNF inhibitors are administered. Suggested courses of therapy are 1 month if the tuberculin skin test is positive and 3 to 4 months if the patient has active TB.1

Patients should also be evaluated for evidence of other preexisting infections. TNF inhibitors are best avoided in patients with chronic infections such as hepatitis B; concomitant illnesses such as optic neuritis, multiple sclerosis, aplastic anemia, interstitial lung disease, and systemic lupus erythematosus may be exacerbated by TNF inhibitor therapy. Live vaccination is contraindicated in patients receiving TNF inhibitors. ■

A 65-year-old woman, who was confined to a wheelchair because of severe rheumatoid arthritis, was concerned about nodules that had erupted on her fingers and hands during the previous 3 weeks (Figure A). Her medical history included colon cancer, chronic renal insufficiency, anemia, and hypertension. The nonpruritic nodules were painful when they began to form under the skin; however, once they erupted, the pain disappeared. 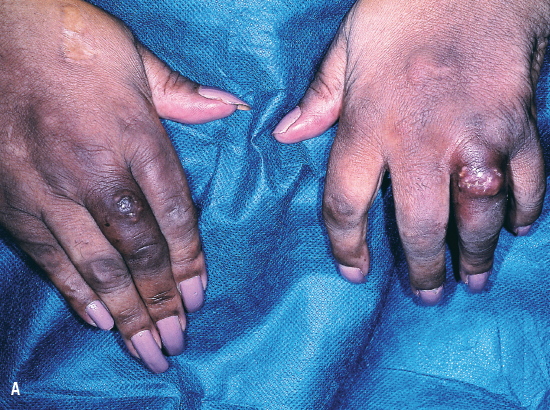 Four firm, irregular nodules at various stages of development were noted on the dorsa of the fingers and hands. One of the lesions had exuded a yellow-white chalky material from several locations. The patient reported the occurrence of similar nodules in the past; 8 months earlier, a lesion erupted over the left fifth metacarpophalangeal joint, and more recently, a nodule developed over the ulnar surface of the left forearm. Both lesions discharged moist, yellow material and resolved spontaneously within several days.

The patient’s medical history raised the possibility of cutaneous calcium deposition. However, roentgenograms of the hands revealed osteopenia and lytic lesions around the joints but no calcium deposits. Erosive and cystic changes were demonstrated at the proximal interphalangeal joints of the second through fifth fingers; similar changes were more prominent at the second and third metacarpophalangeal joint space of the right hand (top row) than of the left (bottom row). The diagnosis of rheumatoid nodules was confirmed clinically.

Rheumatoid nodules are found in approximately one-third of patients with rheumatoid arthritis. Usually, they are associated with more severe disease and a high rheumatoid factor titer. These lesions also occur in about 5% of persons with systemic lupus erythematosus. Most often located over bony prominences or extensor surfaces—notably on the forearms, elbows, knuckles, feet, and knees—the nodules tend to be deep and asymptomatic. The presentation of eruptive nodules in this patient was atypical. Intralesional corticosteroids were injected into the largest nodule, after which all of the developing and fully developed lesions disappeared completely. At the 4-month follow-up, no recurrence of lesions was noted despite the patient’s refractory arthritis. ■ 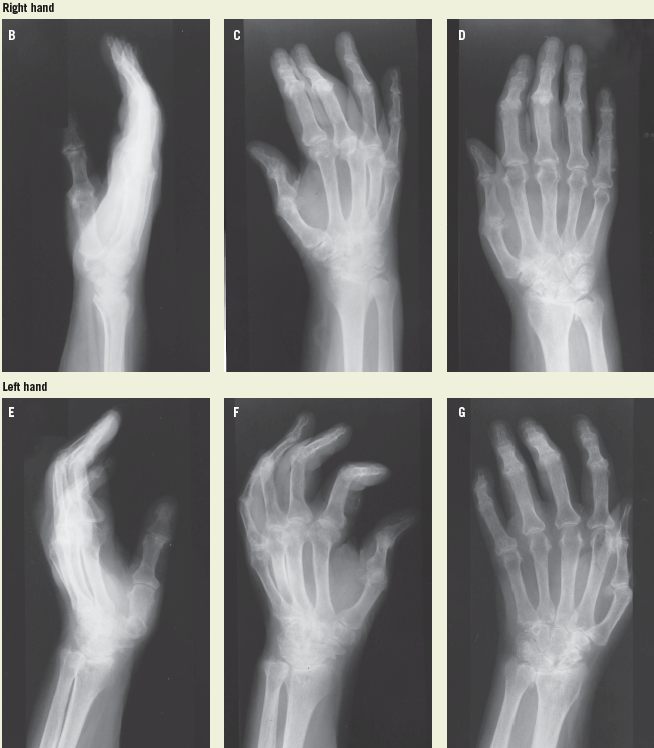