What is causing that embolism?

A healthy 32-year-old scuba diver was taken to the emergency department (ED). He had lost consciousness following a dive in which he had held his breath during a rapid ascent to the surface and had performed the Valsalva maneuver to clear his ears. In the ED, the patient was alert with normal speech; he complained of extremity weakness and paresthesias but denied nausea, vertigo, diplopia, and oscillopsia.

A chest film, an ECG, and serum metabolic study results were normal. Pulse oximetry was 99% without dyspnea. A CT scan of the brain showed no cerebral hemorrhage. There was no evidence of cervical spine injury.

He was transferred to a hyperbaric treatment center within 6 hours of the injury. The patient had diffuse weakness and profound gait ataxia; he was unable to stand. Profound loss of proprioception of all joints was present, with loss of light touch and temperature sensations across the lower neck, upper and lower extremities, thorax, and abdomen. Vibratory sensation was absent. Toes were up-going bilaterally with crossed adductor responses. Spontaneous triple flexion signs were noted. Umbilicus reflexes and rectal tone were absent. Deep tendon reflexes showed diffuse hyperreflexia with sustained ankle clonus. Cerebellar examination revealed severe dysmetria on finger pursuit with right worse than left.

These lesions share a common arterial supply through the vertebral basilar arteries (posterior cerebral circulation). The patient embolized gas through the vertebral artery, which ascended to the anterior median spinal artery (just proximal to the basilar artery) that supplies the superior region of the cervical spinal cord. Additional gas emboli ascended to the right inferior cerebellar artery and caused the cerebellar infarct. The remaining remnants of gas emboli ascended to the bifurcation of the basilar artery crossing to the left posterior cerebral artery, which gives rise to the medial lenticulostriate vessels and explains the lacunar infarct within the left hemisphere. No evidence of cerebral edema was noted.

The patient received daily recompression treatments in the ICU. After his condition improved, he was transferred out of the ICU. During the 5 weeks he spent in the hospital, he started to walk with assisting devices and his bladder function and sensation of light touch and temperature began to recover. He was transferred to a neurologic rehabilitation facility. The diver’s history of breath-holding on rapid ascent with subsequent loss of consciousness suggested arterial gas embolism.1

Discussion. Pulmonary overpressurization from the Valsalva maneuver with rapid pulmonary air expansion on ascent is a common cause of arterial gas embolism.2 Arterial gas embolism needs to be distinguished from decompression illness, which tends to manifest over several hours and is associated with multiple joint pain, patchy dysesthesias, and other related symptoms. Patent foramen ovale, which is present in nearly 30% of the general population, is usually not a health problem. However, in the setting of rapid pressure changes, this relatively benign condition can predispose a person to arterial gas embolism and its associated high risk of morbidity and mortality.3

Intraoperative complications that can arise during cardiac surgery with extracorporeal circulation and peripheral vascular surgery may cause a gas embolism. Endobronchial resection of lung tumors using Nd:YAG laser, cesarean section, and pelvic surgery in the Trendelenburg position also can induce these embolisms. In addition, trauma encountered during rapid submarine escape, rapid decompression from loss of cabin pressure during flight, pulmonic barotrauma during cardiopulmonary resuscitation, and head and neck injury can lead to these embolisms.4

Corticosteroids can be considered for acute spinal cord and posterior fossa lesions; these agents may be less effective for cerebral lesions. Rehydration with volume expansion can maximize microcirculation perfusion. Aspirin or heparin may be given to avoid platelet aggregation and clot formation.

Outcome of this case. This patient is home and receives outpatient physical therapy. His quadriparesis and sensory dysesthesias have almost completely resolved, although significant proprioceptive loss that compromises his gait remains. Outpatient and occupational therapy will continue. ■ 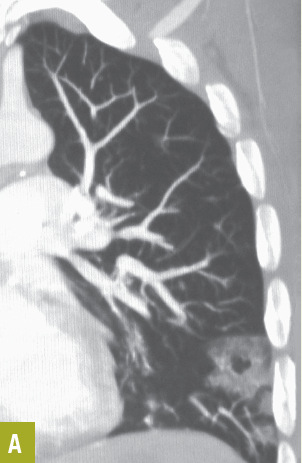 A 51-year-old man who was an active injection drug user was admitted to the ICU with septic shock and severe respiratory distress. Notable findings were fever, multiple opacities on a chest radiograph, and an elevated white blood cell count.

Septic pulmonary embolism is an uncommon disorder that generally presents with an insidious onset; characteristic features include fever and lung infiltrates associated with an active focus of extrapulmonary infection.1,2 Risk factors are injection drug use, indwelling catheters/ devices, pelvic thrombophlebitis, and suppurative processes in the head and neck.3,4 The embolic blood clot that leads to an infarction and the microorganisms contained in the clot incite a focal abscess.4

The triad of bacteremia, fever, and multiple cavitary pulmonary infiltrates on a chest radiograph should always prompt a search for right-sided infective endocarditis.2,3  ■

Spontaneous Embolization of a Thrombus-in-Transit

Chest pain and dyspnea of acute onset prompted a 49-year-old man to seek urgent medical attention. Two months earlier, he had sustained fractures to the right arm and both ankles after a 25-ft fall. Ten days before presentation, the patient’s rehabilitation physician had discontinued daily enoxaparin because of improved mobility and a presumed decreased risk of thromboembolism.

A CT scan of the chest revealed large bilateral pulmonary emboli. A heparin weight-based protocol was started, and transthoracic echocardiography was performed to look for signs of right heart strain. The imaging revealed what appeared to be 2 large echodense structures within the left and right atria. A follow-up transesophageal echocardiography (TEE) revealed a large mobile echogenic structure of 3.6 X 1.5 cm traversing the intra-atrial septum at the level of the foramen ovale, consistent with a thrombus-in-transit (Figure A). During the procedure, the patient began retching and repeated viewing of the intra-atrial septum revealed that the thrombus had completely disappeared. An agitated saline study showed contrast bubbles passing from the right atrium (RA) to the left atrium (LA), confirming the presence of a patent foramen ovale (Figure B). 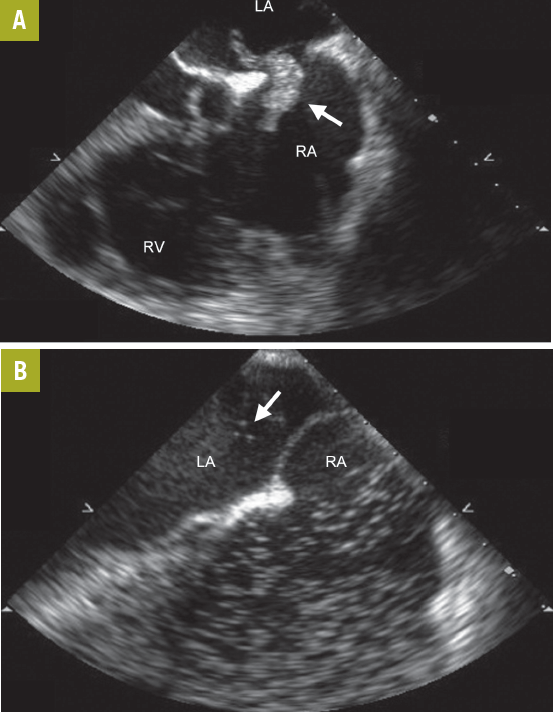 Although venous thromboemboli are common, paradoxical emboli are relatively rare. The reason is that diagnosis requires an arterial embolus and a venous source in addition to an abnormal ommunication between the venous and arterial circulation. Even when all criteria are met, almost all cases are diagnosed on a presumptive basis.

Intracardiac thrombi are most often associated with pulmonary emboli and can be visualized on transthoracic or transesophageal echocardiography in as many as 4% to 18% of cases.1 If a patent foramen ovale is present, a thrombus can cross from the right directly into the left atrium. When the thrombus is not attached to any other intracardiac structure, the phenomenon is known as a thrombus-in-transit.2

Following the TEE, the patient regained consciousness and had no shortness of breath, headache, vision changes, or other neurological symptoms. A complete physical examination and close monitoring over the next 24 hours failed to show any new neurological or systemic abnormality. Heparin was continued until an international normalized ratio of 2 to 3 was achieved. Warfarin was then substituted, and the patient was discharged to a rehabilitation facility.

The patient’s lack of systemic symptoms after embolization suggests that the thrombus probably was pushed back into the right atrium and passed into the pulmonary circulation.  ■

A 75-year-old obese woman with subacute-onset dyspnea and lower right posterior chest pain was brought to the emergency department. She had a history of diastolic heart failure, arthritis, and suspected obstructive sleep apnea. The patient was dyspneic at rest. Pulse oximetry revealed an oxygen saturation percentage in the low 90s while she was receiving supplemental oxygen (4 L by nasal cannula).

Trace bilateral peripheral edema was present with no calf swelling. A few crackles were heard at both bases. Cardiac findings were normal, except for a soft ejection systolic murmur at the left lower sternal edge. There was no back or chest wall tenderness. Chest film findings could be interpreted as bibasilar infiltrates or atelectasis. 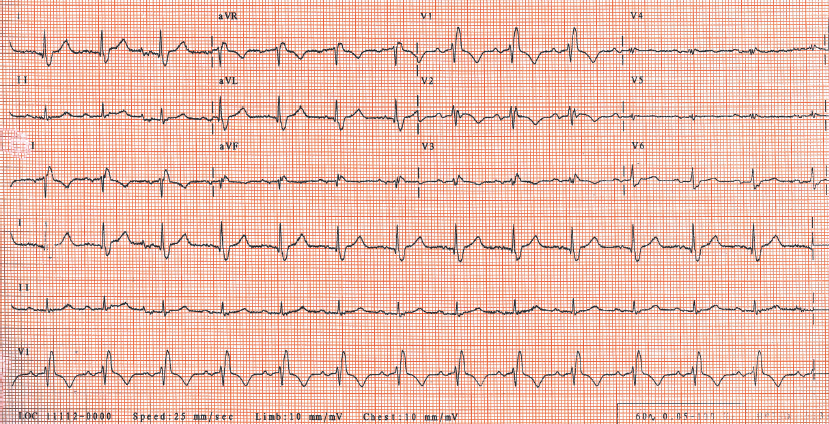 The white blood cell count was 17,000/µL; all other laboratory findings were normal. An ECG showed that the patient was in sinus rhythm with right axis deviation, complete right bundle branch block (RBBB), and anS1Q3T3 pattern; no such abnormalities had been demonstrated on an ECG obtained several weeks earlier.

Based on the clinical presentation and the ECG changes, the suspected diagnosis was acute pulmonary embolism. Although the ECG manifestations of pulmonary embolism can vary, findings consistent with right ventricular strain pattern and acute cor pulmonale in the appropriate clinical setting are suggestive.

Acute cor pulmonale is demonstrated on an ECG by RBBB, right axis deviation, and an S1Q3T3 pattern. RBBB associated with pulmonary embolism may be transient, or it can persist for up to 3 years after the embolism is detected.

In this patient, evidence of segmental mismatch defects on a ventilation-perfusion lung scan confirmed the probability of pulmonary embolism. A venous Doppler study revealed deep venous thrombosis in the right popliteal venous system; an echocardiogram showed a dilated right ventricle with an elevated estimated right ventricular systolic pressure of 50 mm Hg. An intravenous heparin infusion was given; 48 hours later, oral warfarin was initiated. Because the patient was elderly and hemodynamically stable, thrombolytic agents were not used. The patient’s dyspnea and chest pain abated; an ECG showed the RBBB had resolved. ■