What Is the Cause of the Enlarging Rash on This Girl’s Forehead?

An 8-year-old, otherwise healthy girl presented for evaluation of an enlarging dark rash on her forehead. The rash had started 3 years ago as a small white circle on her forehead, and it had gradually darkened and spread from her forehead to the tip of her nose. Topical corticosteroid creams prescribed by various physicians over the years had not helped. The rash was not itchy or painful.

Examination of the girl’s forehead revealed a 2 × 10-cm, hyperpigmented, smooth, flat linear lesion spanning from her hairline vertically down to the tip of her nose (Figure 1), with associated atrophy of the underlying tissue on palpation. The lesion had no induration or erythema. 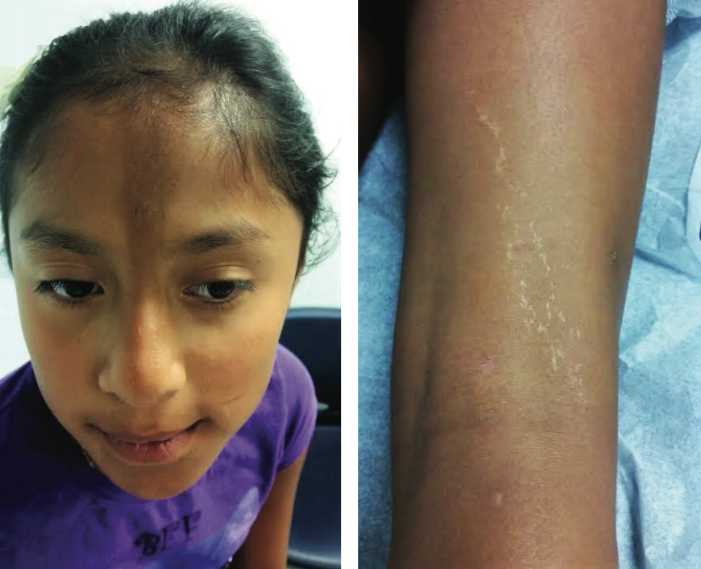 She also had a hypopigmented, flat, nonpruritic, linear lesion measuring 2 × 8 cm behind her lower right thigh and extending vertically to the posterior knee (Figure 2). The girl said that this lesion had first appeared a month ago. She has normal range of motion in her right leg.

Are these lesions related? What could be the cause?

Due to the concern for an underlying autoimmune process, the girl was evaluated by a rheumatologist, who made the diagnosis of linear en coupe de sabre, a form of linear scleroderma affecting the scalp that has the appearance of a cut from a saber. The patient also had linear scleroderma involving the popliteal fossa of her right leg that almost crossed a joint line—a finding associated with future joint contractures.

Scleroderma is an autoimmune connective-tissue disorder caused by the accumulation of collagen, resulting in various systemic manifestations.

The majority of children with morphea receive a diagnosis between the ages of 2 and 14 years. Although there are several types of morphea, linear scleroderma is the most common subtype. It presents as a unilateral, smooth, shiny streak that can involve the dermis, subcutaneous tissue, muscle, and bone of the head, arms, and/or legs.1,3

When linear scleroderma occurs on the head, it is called en coupe de sabre, and it can cause alopecia, poor dentition, atrophy and disfigurement of underlying tissue, and ophthalmologic problems, and it even can affect the brain parenchyma. Central nervous system involvement with seizures and uveitis has been documented.

Linear scleroderma of the limbs can have devastating effects on a child’s growth and development, including limb asymmetry, joint contractures, and psychological disability. If linear scleroderma affects large areas or crosses joint lines, it can cause irreversible complications. Therefore, it is recommend that treatment be started early in these cases.2,3

It was unclear whether our patient had SSc or LS. Results of laboratory evaluation showed an elevated erythrocyte sedimentation rate. Her immunofluorescent antinuclear antibody test result was positive, demonstrating a speckled pattern that can be seen in cases of SSc.

Because her en coupe de sabre caused atrophy of her forehead, there was concern that the fibrosis may extend to her cranium and involve her brain parenchyma. She therefore underwent magnetic resonance imaging of the head. She also underwent pulmonary function testing to assess for pulmonary involvement, as well as a barium swallow test to assess for gastrointestinal tract scleroderma. The results of these imaging tests and procedure were normal and did not support a diagnosis of SSc.

No consensus exists on the management of linear scleroderma due to a lack of randomized, controlled therapeutic studies. The condition tends to be treated differently by dermatologists and rheumatologists based on the extent of the disease. Our patient’s linear scleroderma resulted in mild atrophy of her facial tissue and almost crossed a joint line. To limit the progression of the girl’s disease, her rheumatologist planned to treat her with methotrexate for its anti-inflammatory, immunosuppressive, and antimetabolite properties.4,5