The incidence of acute kidney injury (AKI) is increasing. In an analysis using the Medicare 5% Sample Beneficiary Standard Analytical File for the years 1992 through 2001, Xue et al1 noted that the incidence rate of AKI increased by approximately 11% per year. Chronic kidney disease commonly complicates AKI and may lead to end-stage renal disease (ESRD), requiring chronic renal replacement therapy. We present a case of an elderly woman who developed ESRD as a complication of absorptive hyperoxaluria, a rare and potentially reversible cause of ESRD.

An 87-year-old African-American woman was admitted to a community hospital for evaluation of anorexia and polyuria. Her laboratory tests showed severe renal failure. On a previous hospitalization five months earlier for the treatment of paroxysmal atrial fibrillation, her blood urea nitrogen was 10 mg/dL and serum creatinine was 1 mg/dL. She had mild systolic hypertension and a vague history of asthma. Her current medications included enalapril 2.5 mg, carvedilol 3.125 mg, warfarin 2.5 mg, vitamin C 1000 mg, albuterol inhaler, and 3 tablets of calcium carbonate 600 mg plus vitamin D 400 IU. The patient did not take any over-the-counter medications and did not smoke or drink alcohol. She had no drug allergies. 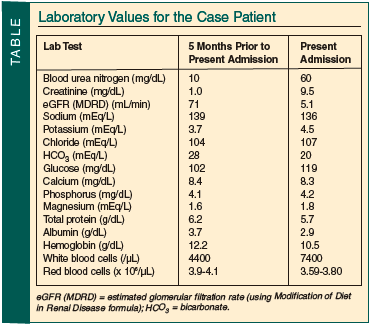 A review of systems revealed a weight loss of 2-3 pounds since her last hospitalization and polyuria. She denied having diarrhea but admitted having a bowel movement after each meal. Physical examination showed: height, 61 inches; weight, 126 pounds; body mass index 23.8; temperature 97.0 degrees F; blood pressure 130/80 mm Hg; pulse 78 per minute; and respirations 16 per minute. The entire examination was normal except for an irregular heartbeat. The Table provides the laboratory tests.

Other results were urinalysis pH: 6.5; specific gravity, 1.010; bilirubin, ketone, and blood were negative, with a trace of protein; white blood cell count was 7400/μL; and red blood cell count was 3.59 x 106/μL. Ultrasound showed both kidneys to be 9.5 cm in length with mild cortical thinning and increased echogenicity. Her daily urine volume ranged between 2000-2600 mL.

Warfarin was withheld, enalapril and vitamin C supplements were discontinued, and amlodipine 5 mg daily was started. AKI was diagnosed, and the patient received intravenous fluids at the rate of 100 mL per hour for 3 days. She did not show any signs of improvement, so therefore dialysis was initiated. On day 11, a kidney biopsy was sought. It revealed no pathological changes in the glomerulus with patent capillary lumen and unremarkable basement membrane. Proximal tubules showed diffuse degenerative and regenerative changes and displayed numerous intracytoplasmic and intraluminal polarizable calcifications consistent with calcium oxalate (Figure). Moderate tubular atrophy was noted, as well as mononuclear cell infiltrate. There was no evidence of vasculitis or tubulitis. Arterial blood vessels showed mild intimal fibrosis and medial sclerosis. Intratubular calcifications were found in the medulla. The immunofluorescence study was negative. The diagnosis of acute oxalate nephropathy (AON) was made. 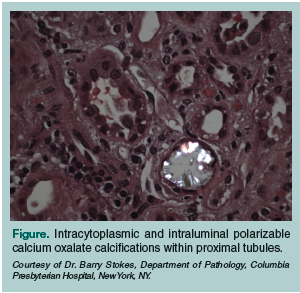 The plasma oxalate level obtained after starting dialysis was 4.23 mg/mL (National Medical Service Laboratory, Willow Grove, PA). Known causes of AON were considered, namely ingestion of oxalate or substances that are metabolized to oxalate. They were excluded because of negative history. The patient was mainly vegetarian, ate a small amount of fish, and drank several cups of regular tea and an herbal tea called Jamaican Ceresse tea. The oxalate content of the Jamaican Ceresse tea is 0.04 mg/mL (low; National Medical Service Laboratory), excluding it as the potential cause.

Malabsorption was investigated, and a 3+ fat in stool was found (qualitative test with 90% sensitivity and 90% specificity for stool fat > 6-7 g in 24 h).2 The possibility of gluten enteropathy was considered; however, anti-gliadin antibody and anti-endomysial antibody in the blood were reported negative. A computed tomography scan of the abdomen and small-bowel series showed no mucosal thickening. The patient refused endoscopy and biopsy. Pancreatic enzymes were given orally with each meal, as well as a calcium supplement. The patient’s renal function has not improved, and she continues to receive dialysis at this time.

The case patient’s renal failure was due to AON, a condition that has been described in middle-aged patients with hereditary oxalosis types I and II.3,4 The reported cases had recurrent episodes of renal colic due to nephrolithiasis and were in patients much younger than the case patient, so these conditions were excluded as potential reasons.

Increased ingestion of oxalate or substances that are metabolized to oxalate can induce AON and has been reported after intake of star fruit,5 ethylene glycol,6 massive ascorbic acid administration,7 naftidrofuryl,8 or methoxyflurane anesthesia.9 None of these causes were identified.

A review of the case patient’s diet revealed that she is mainly vegetarian and eats small amounts of fish, as well as several cups of regular tea per day (regular tea has a high oxalate content of 47.72-54.92 mg/mL.10 Since the oxalate content of the Jamaican Ceresse tea was found to be low, it was excluded as a potential cause. The patient supplements her diet with vitamin C 1000 mg. Because oxalate is a metabolite of vitamin C, increased intake of ascorbic acid may increase the risk of oxalate stones or AON.

Some studies11,12 but not all13 have shown that vitamin C supplements increase the urinary oxalate level. Whether this increase in oxalate translates into a higher risk of kidney stones has been examined in epidemiological studies: two prospective studies following 45,221 men for six years and 85,557 women for 14 years have reported that doses of vitamin C of 1500 mg or greater per day did not increase the risk of kidney stone formation when compared with individuals taking less than 250 mg per day.14,15 However, Taylor et al,16 in a prospective study of 45,619 men followed for 14 years, showed a 41% higher risk for kidney stone formation in those who consumed more than 1000 mg of vitamin C per day. For these reasons, vitamin C supplements were discontinued for the case patient on admission. This action did not translate into a decrease in the patient’s plasma oxalate level, showing that ascorbic acid intake alone could not account for her problem.

By default, her physicians arrived at the possibility of enteric hyperoxaluria causing AON, which was confirmed with the positive qualitative test for fat in stools. This is due to augmentation of intestinal reabsorption of oxalate and is observed in diseases associated with steatorrhea, including Crohn’s disease,17 celiac sprue, 18 intestinal lymphangiectasia,19 pancreatic insufficiency, 20 jejunoileal bypass surgery for obesity,21 and intake of orlistat.22 The patient gave no history of diarrhea, so malabsorption was not suspected. Elderly patients frequently do not admit to having several bowel movements per day23; however, stool examination showed steatorrhea.

When fatty acids are present intraluminally, they bind calcium, leaving soluble oxalate available for absorption. Absorbed oxalate is excreted in the urine and can cause kidney stones or AON. The etiology of the steatorrhea could not be diagnosed in the case patient because she refused the necessary investigations of endoscopy and biopsy.

In a study of 70 elderly patients with malabsorption, Montgomery et al24 found that 14 had pancreatic insufficiency, most of whom gave no history of pain, alcoholism, or gallstones. Twenty-three had post-gastrectomy syndrome or small-bowel diverticulosis, and eight had celiac disease. Fifteen patients had an anatomically normal bowel.

The patient was empirically treated with pancreatic enzymes (to decrease the intestinal fat loss) and given calcium supplements to increase the binding of oxalate in the gut lumen. She was also instructed on following a low-fat and low-oxalate diet. Despite these measures, her plasma oxalate remains high at 4.23 mg/mL, her kidney function has not improved, and she continues to receive dialysis nine months after the diagnosis of AON was established. In a study of 35 patients with chronic renal failure (CRF), Tomson and colleagues25 reported that plasma oxalate level ranged between 0.54-10.44 mg/mL. They found renal deposits of oxalate in 23 patients with CRF whose plasma oxalate measured during life was 1.80 mg/mL or higher.

Although many cases of AON cause irreversible kidney damage, a review of the literature revealed one case described by Cuvelier et al26 of a renal transplant recipient who underwent two kidney transplantations seven months apart. Kidney biopsies showed AON on both grafts. After the second graft failed, the diagnosis of steatorrhea and enteric hyperoxaluria was made. The patient was mentally retarded and had not given a history of diarrhea. Measures were taken to reduce the dietary intake of fat and oxalate. Oral calcium supplements and lipase were provided, and after 11 months following the second transplant, dialysis could be discontinued due to improvements on the graft function.

The case patient illustrates the fact that malabsorption syndrome can be easily missed in the elderly individual because of the absence of the usual symptoms of diarrhea, and that even after extensive investigations the cause may not be found.18 Although AON is frequently irreversible, sometimes treatment leading to decreased oxalate absorption can successfully reverse the problem, with recovery of the kidney function.20 The process can be slow, so the case patient’s physicians continue to observe her, with hopes for improvement of her renal function nine months after the diagnosis was established.