A 22-year-old Hispanic male inmate with no remarkable past medical or social history presented to our hospital with a persistent, diffuse, erythematous eruption.

Approximately 1 year prior to admission he was evaluated for pustules on the posterior scalp diagnosed as acne. The lesions persisted into keloidal acne after months. Roughly 2 weeks prior to presentation, a unit healthcare evaluated the patient and prescribed trimethoprim-sulfamethoxazole (TMP-SMX) 480 mg twice daily for the pustules on his scalp.

Two days after being prescribed TMP-SMX, the patient developed a painful and pruritic papular eruption to his calves. Over the following week, the lesions on his calves developed into erythematous bullae and new erythematous papules erupted on his abdomen, thighs, and arms. The unit provider subsequently discontinued the antibiotic.

After 5 days of persistent symptoms, he presented to our hospital with lesions comprising nearly 60% of his body. Upon admission, he was initially placed on only diphenhydramine for itching, pending further investigations.

The patient did not complain of any recent illnesses nor had he been around sick contacts in the past month. He presented with new findings of bilateral non-pitting edema of his ankles, feet, and calves.

C-reactive protein was elevated at 1.1, and C3 and C4 were slightly decreased at 77 and 19.5, respectively. Urinalysis revealed 30 mg/dl of protein, 2+ blood, and no bacteria.

Dermatology was consulted and performed a biopsy which showed perivascular and interstitial inflammatory infiltrates composed mainly of neutrophils, lymphocytes, and eosinophils. The pathological diagnosis was leukocytoclastic vasculitis (LVC). The patient was managed with a tapered dose of prednisone and local wound care. He followed up in dermatology clinic 6 weeks later; and the lesions healed with minimal residual scarring and hyperpigmentation. 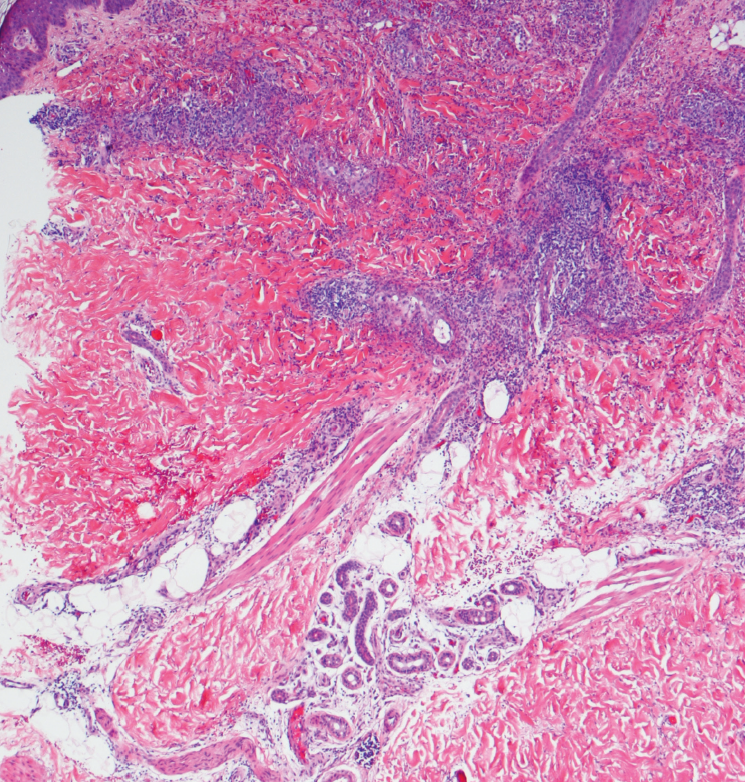 The process of inflammatory damage to and the destruction of blood vessels is called vasculitis. LCV, also known as hypersensitivity vasculitis, is a small-vessel vasculitis characterized by leukocyte infiltration, inflammation, and necrosis of vessel walls.1 The etiologies of LCV include infection, autoimmune disease, malignancy and medication.2

The most common cutaneous vasculitis is LCV, thought to be the result of circulating immune complex deposition within and around vessel walls.3 Neutrophils arrive later to the site of deposition and cause a brisk inflammatory response.4 Clinically, LCV often presents as palpable purpura, with systemic symptoms of fever, athralgias, arthritis, and renal involvement; however, such systemic symptoms are not necessary for diagnosis.5

Causes. It can be induced by foods, collagen-vascular disorders, paraproteinemas, medications, infections, and rarely malignancies—although idiopathic causes account for up to 50% of cases.6,7

Literature. There is only 1 reported case of TMP-SMX-induced vasculitis.10 LeMaster and colleagues report a case of a 53-year-old man with a history of congestive heart failure and type 2 diabetes mellitus, who was treated with vancomycin and metronidazole for a cellulitis complicated with osteomyelitis. After the infection improved, the patient was discharged on a 2-week course of TMP-SMX. Four days later, he developed a palpable purpuritic rash to the bilateral dorsal feet, left forearm, and left hand.

Upon biopsy, it was discovered the patient had a hypersensitivity reaction consistent with LCV. TMP-SMX was discontinued and no further treatment for the rash was undertaken.10 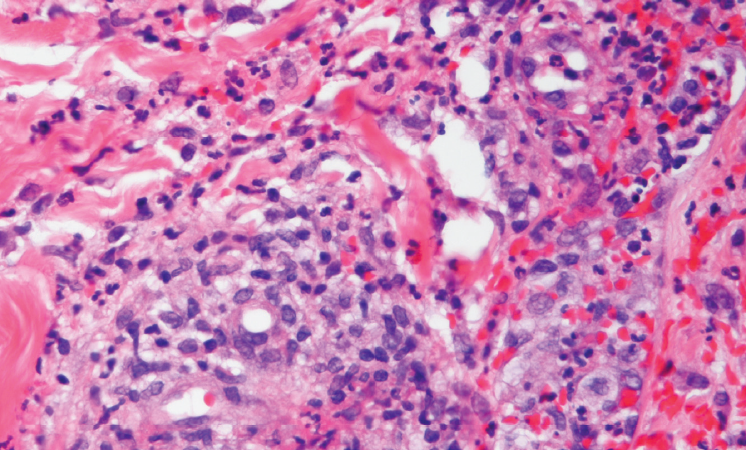 Treatment. The definitive treatment is stopping the offending agent.11 Topical steroids and antibacterial creams may be helpful in the case of mild LCV.2 In moderate to severe cases, a dose of oral corticosteroids at 60 mg to 80 mg per day, tapered over 3 to 6 weeks, has been used to prevent further ulceration. In cases of persistent or very severe LCV, dapsone 100 mg to 150 mg per day—in combination with immunosuppressive drugs such as cyclosporine (3 mg/kg to 5 mg/kg per day)—have been shown to provide relief.12 Azathioprine 150 mg per day in combination with steroids may also be useful in speeding recovery.13

TMP-SMX is an uncommon cause of LCV; however, it must be considered as an offender when a rash appears following treatment. Immediate discontinuation of the offending agent is first line in treating the eruption. The role of steroids and immunosuppressive drugs in the management of LCV is unclear. Further study of the pathophysiology of LCV is needed to guide clinical management strategies.