A Teenager With a History of Shortness of Breath and Headaches

A previously healthy 14-year-old boy presented to our emergency department with a 6-month history of shortness of breath with exercise and frequent headaches. He denied frequent upper respiratory infections, muscle weakness, or other neurologic changes. There was no past medical or family history of asthma, migraines, or congestive heart failure.

On examination, the boy was in no acute distress. Vital signs were stable, and blood pressure taken in the right arm was 140/90 mm Hg. Color and perfusion were good. His lungs were clear to auscultation, his breathing was unlabored, S1 was normal, and S2 was normally split. A grade 1/6 systolic ejection murmur was heard at the left upper sternal border with radiation to the back. No hepatomegaly or splenomegaly were noted. Perfusion was good, and bilateral radial, femoral, and pedal pulses were 2+. A radiograph of the chest was obtained. 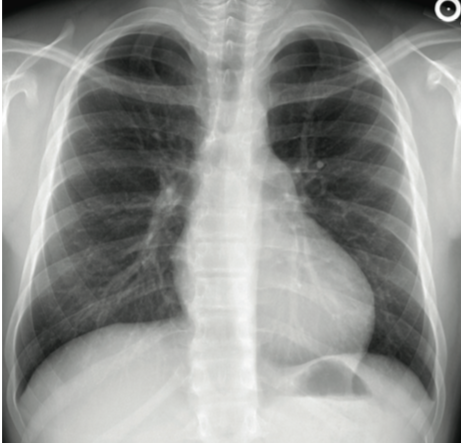 What could be causing this teenager’s symptoms?

Answer: Coarctation of the aorta

The radiograph of the chest showed clear lung fields and a normal cardiac silhouette, but notching of the posterior ribs was noted (Figures 1A and 1B). Renal ultrasonography results as part of a hypertension workup revealed abnormal flow patterns in the renal arteries and abdominal aorta. Four extremity blood pressure measurements revealed a difference between the upper and lower extremities of about 10 mm Hg, with lower readings in the lower extremities. On further questioning, the patient admitted to previously elevated blood pressure readings, intermittently cold feet, and leg cramps during exercise. An echocardiogram documented severe coarctation of the aorta (CoA) distal to the left subclavian artery. Collaterals were suspected. Both findings were confirmed and further delineated by computed tomography (CT) angiography (Figure 2). The CoA segment was stented open in the catheterization suite (Figure 3), and the patient was discharged the following morning. The postinterventional course remained uneventful at 3 months follow-up. 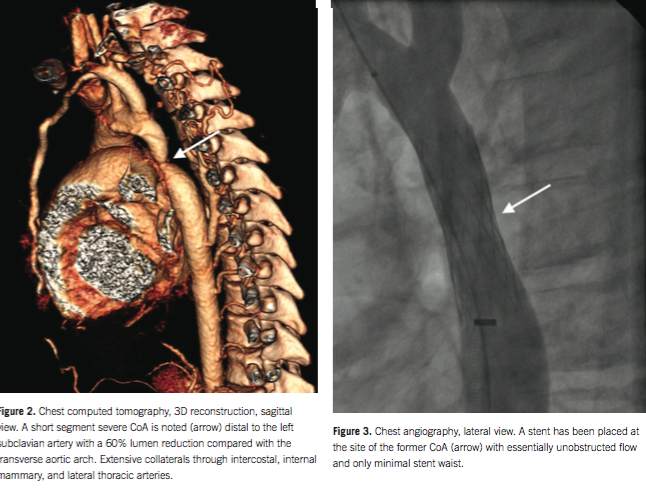 CoA is a common and potentially life-threatening cardiovascular abnormality, accounting for 6% to 8% of patients with congenital heart disease.1,2 It is about twice as common in boys than in girls, but it occurs in up to 5% of female patients with Turner syndrome. Frequently associated cardiac findings are a bicuspid aortic valve, a persistent arterial duct, and ventricular septal defects.1-3 If untreated, patients will die at a mean age of 34 years.4 Unlike neonates, most patients older than 1 year are asymptomatic. They may complain of headaches, shortness of breath with exercise, or lower extremity claudication. A pulse and blood pressure difference between the right upper and lower extremities is diagnostic and should be part of any hypertension workup. The difference may be subtle beyond infancy due to the emergence of collaterals. Though the correct diagnosis is missed in up to 86% of referrals, it is eventually made at a median age of 10 years.5,6

The first pathognomonic finding may be notched ribs on an incidental chest radiograph. Dilated intercostal arteries erode the inferior surfaces of the posterior ribs.1 Even on a routine echocardiogram, the CoA may still be missed if the aortic obstruction is located distally. Sometimes, the obstruction is below the level of the diaphragm, and a chest CT angiogram or magnetic resonance imaging will confirm the diagnosis. Transcatheter-covered stent placement is now considered a primary therapeutic option in adolescents and adults, decreasing the perioperative morbidity and the risk of paraplegia associated with surgery.7-9 Stent placement is preferable over balloon angioplasty alone.7-9 Compared with surgery, CoA recurrence rate and frequency of aneurysm formation after stent placement appear higher, but the incidence of paradoxical hypertension appears lower.10-12 Paradoxical hypertension tends to be more prevalent with advancing age at intervention.1,11,12 The overall long-term outcome is excellent with either a surgical- or catheter-based approach.

Christian Lilje, MD, is with the Departments of Pediatrics and Cardiology at Louisiana State University Health Sciences Center in New Orleans.

Kiran Mallula, MD, is with the Departments of Pediatrics and Cardiology at Louisiana State University Health Sciences Center in New Orleans.

Kenneth Ward, MD, is with the Department of Radiology at Children’s Hospital of New Orleans, Louisiana.

Jane Congeni, MD, is with the Department of Radiology at Children’s Hospital of New Orleans, Louisiana.