A Red Macular Rash With Yellow Papules on a Neonate

A 3-day-old neonate was noted to have a diffuse, erythematous rash over the body and the extremities. The rash had been first noted 24 hours ago. The newborn was otherwise asymptomatic. He had been born to a gravida 2, para 1, 26-year-old mother at term following an uncomplicated pregnancy and normal vaginal delivery. Maternal health was unremarkable. 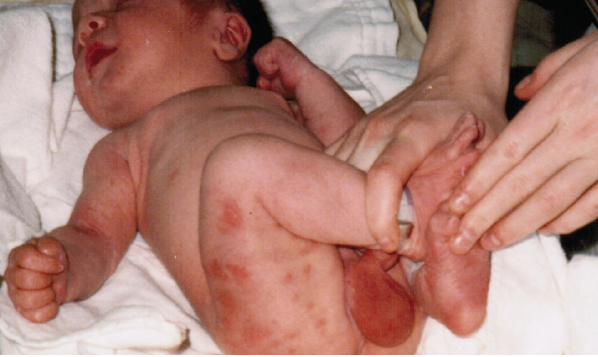 Physical examination revealed erythematous macules and patches studded with erythematous or yellowish papules on the trunk and extremities. The rest of the examination findings were unremarkable.

Erythema toxicum neonatorum, also known as erythema toxicum or toxic erythema of the newborn, is a common neonatal dermatologic disorder characterized by erythematous macules and/or patches that are studded with erythematous or yellowish papules and sometimes pustules.1-4 The rash typically becomes evident within the first 72 hours of life.5

Erythema toxicum neonatorum develops in approximately 40% to 70% of all healthy full-term neonates.6-8 Rodríguez-García et al examined 247 healthy newborns in Spain once on day 2 of birth and found the condition in 51 (20.6%) of these neonates.9 This study could be criticized, because the lesions of erythema toxicum neonatorum typically develop between 24 and 72 hours of life. Examination of the neonates only once on day 2 of life likely resulted in an underestimation of the true prevalence of this dermatosis. Likewise, Monteagudo et al examined 1,000 neonates in the first 72 hours of life in Spain and found that 167 (16.7%) of these neonates had the condition.8 In this study, 83.5% of newborns were examined on the first day of life; as such, the actual prevalence conceivably is higher.

Erythema toxicum neonatorum occurs less frequently in preterm neonates and low-birth-weight neonates.3,4,10,11 Presumably, maturity influences the inflammatory response of the skin that may lead to the development of the condition, It is more common in neonates of multiparous mothers,12,13 and it is more common in the summer or autumn months.4,9,10 No sexual or racial predisposition has been noted.1,5 Erythema toxicum neonatorum has not been reported in stillborn neonates.1,2

There is a positive correlation between the severity of the lesions and the duration of vaginal delivery, implying that prolonged contact with vaginal secretions might play a role.10 Commensal microorganisms gain entry into the skin, possibly through hair follicles, triggering the local immune system and a systemic acute-phase response.7 It has been shown that water channel proteins aquaporin 1 and aquaporin 3, along with psoriasin, nitric oxide synthase enzymes, interleukin-1 and -8, eotaxin, and the adhesion molecule E-selectin, are involved in activating the skin immune system.5,14 Mast cells also contribute to the inflammation process as they interact with the vasculature and participate in the recruitment of inflammatory cells, including eosinophils and macrophages near the hair follicle.15

Histologic examination of erythematous macules shows superficial dermal edema with perivascular eosinophilic infiltrate.5 No relation to hair follicles or sweat ducts can be established at this stage. Microscopic examination of papules shows mild hyperkeratosis and a more pronounced edema with eosinophilic infiltration.5 The superficial layer of the pilosebaceous unit is most intensely affected.5 In the pustules, on the other hand, the infiltrate is located in the subcorneal or intraepidermal regions.5 These pustules contain more than 50% eosinophils and a few neutrophils.5

Erythema toxicum neonatorum is characterized by erythematous macules and/or patches studded with erythematous or yellowish papules and sometimes pustules.1-4 This leads to what is classically described as a “flea-bitten” appearance. The papules and pustules usually measure 1 to 3 mm in diameter, while the surrounding erythema measures 1 to 3 cm in diameter. In most cases, lesions develop between 24 and 72 hours of age, but they may appear as late as 3 weeks of age.3,8 Rarely, the eruption is present at birth.1,16 The trunk is the site of predilection.8,11 The face and extremities also may be involved.11 Atypical cases with pustules localized to the genitalia also have been described.17 The palms and soles are almost always spared.5,8 This pattern of involvement might relate to the distribution of hair follicles.5 Papules and pustules usually are discrete and scattered; the number may vary from a few to dozens. The eruption is asymptomatic.4,8 Although individual lesions may last for a few hours, the eruption usually persists for several days or, rarely, several weeks.3,4 The pustular eruption tends to last longer. There is no residual pigmentary change or scarring.5 Relapses are rare.

The diagnosis is mainly clinical and in the majority of cases is a spot diagnosis, provided one is familiar with this condition. If necessary, the diagnosis can be confirmed by Wright or Giemsa stain of a pustule, which reveals numerous eosinophils with few or no polymorphonuclear cells and no microorganisms.1,8 Peripheral blood eosinophilia often coexists.5 Although eosinophilia may be present, there is no evidence to suggest that erythema toxicum neonatorum predisposes a neonate to atopy.

Erythema toxicum neonatorum is a self-limited disorder, and no treatment is required. The eruption typically resolves by 1 week of age.11 Parents should be reassured of the benign and nonrecurring nature of this condition.

Dr. Barankin is medical director and founder of the Toronto Dermatology Centre. Dr Hon is professor of pediatrics at the Chinese University of Hong Kong.