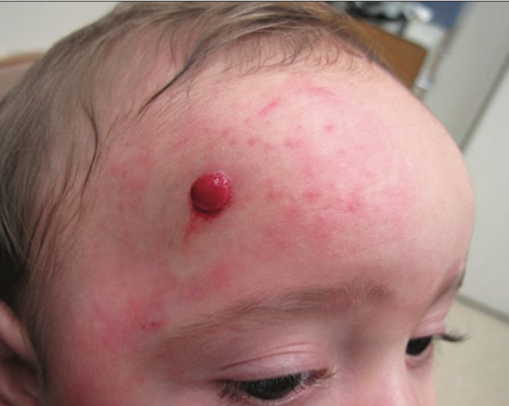 The lesion on this 7-month-old boy’s forehead developed several weeks earlier after minor trauma to the area. It had rapidly enlarged and become irritated.

The 7-mm, bright red, friable nodule was surrounded by dermatitis caused by adhesive bandages applied to control profuse bleeding. The child was otherwise healthy and remaining examination findings were normal. A clinical diagnosis of pyogenic granuloma was made.

Pyogenic granuloma is a common, benign vascular proliferation that is usually diagnosed clinically. The typically solitary papule appears subacutely over the course of weeks and bleeds easily. The lesion may occur in persons of all ages but most frequently develops in prepubertal children and pregnant women (granuloma gravidarum).1,2 There is a bimodal distribution in children, with peaks at 1 year and 11 to 12 years; young boys are affected more often than young girls.2 The head and neck area are the most commonly affected sites.2,3 In atypical cases, a biopsy with histological analysis can be performed to rule out other conditions in the differential diagnosis, including amelanotic melanoma, Kaposi sarcoma, bacillary angiomatosis, and basal cell carcinoma.4

The term “pyogenic granuloma” is misleading because the lesion is not related to infection or granulomatous diseases. Another commonly used term “lobular capillary hemangioma” more accurately describes the lesion’s histological appearance.1 Minor trauma, chronic wounds, viral infection, and female sex hormones have all been postulated to play a role in the development of pyogenic granuloma. In addition, angiogenic growth factors VEGF and ß-FGF have been shown to be increased in pyogenic granuloma.2 However, the cause remains unknown.1

Although the lesion has no malignant potential and may regress spontaneously, patients often pursue treatment for cosmetic reasons or for relief of pain, discomfort, and bleeding.2,4,5 Of the many treatment options available (eg, shave excision, curettage, cryotherapy with liquid nitrogen, carbon dioxide laser, topical imiquimod cream, and intralesional corticosteroids), there is no clear consensus on a gold standard.1,4 The rate of recurrence is low with all treatments. Surgical excision with primary closure has been found to have the lowest recurrence risk, requires only one treatment, and is often the preferred choice.1,2,5 However, patients or parents frequently choose less efficient options (eg, pulsed-dye laser) to avoid general anesthesia and the risk of scarring after surgery.1-3,5

This boy was initially treated with pulsed-dye laser therapy. Because of continued bleeding and growth of the lesion, his mother opted for excisional biopsy over a second round of laser therapy.