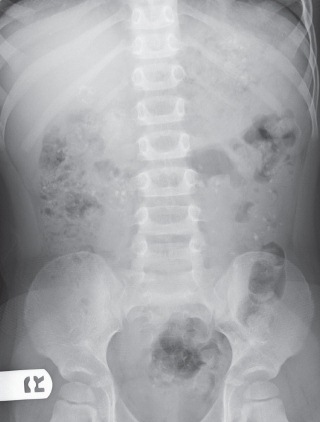 The mother of a 4-year-old boy was concerned about his habit of eating stones and wall plaster; the habit had persisted for the past year. The child had a tendency toward constipation. He recently had had abdominal pain and some discomfort with defecation. Small pebbles had been noted in the child’s stool. His family was of low socioeconomic status; his mother, a single parent, received social assistance.

Physical examination findings were unremarkable. An abdominal radiograph showed multiple round densities, suggestive of pebbles. Air was present throughout the bowel; there was no sign of obstruction. Laboratory studies revealed a hemoglobin level of 11.3 g/dL, an iron level of 28 μg/dL, and a ferritin level of 5 ng/mL. Mean corpuscular volume was 74 fL, mean corpuscular hemoglobin concentration, 32.2 g/dL; red blood cell count, 47,200/μL; and platelet count, 484,000/μL.

Pica involves repeated or chronic ingestion of nonnutritive substances (such as plaster, charcoal, clay, wool, ashes, paint, and dirt) for at least 1 month.1,2 Its name comes from Pica hudsonia, the Latin term for magpie—a bird that is believed to eat almost anything.3 The basis of this unusual craving for nonfood items remains obscure. Specific nutritional deficiencies of particular trace elements may trigger the behavior.1 Iron deficiency is frequently associated with pica.3 In addition, pica is common in infants and children who require prolonged (more than 1 month) total parenteral nutrition and receive no enteral nutrition.

There can be many adverse medical consequences of pica depending on the type of substance ingested. Accumulation of ingested pebbles in the colon can lead to intestinal obstruction.4

This child was treated with parenteral iron, because he refused oral iron. His GI symptoms gradually resolved, as did his pica. The iron deficiency was thought to be the cause of his pica. Consultations with a mental health counselor and nutritionist were recommended.