A 56-year old woman presented with an asymptomatic rash on her face that began around the time she started using Colgate PreviDENT 5000 Enamel Protect, a high fluoride toothpaste prescribed by her dentist for dental caries. On physical exam, the patient had erythema, scaling, and numerous 1-2 mm papules and pustules on the chin, perinasal and perioral areas with sparing of a small zone around the vermilion border (Figure 1). Based on our recommendation, the patient discontinued her newly prescribed toothpaste and had complete resolution of her rash within 3 weeks without any other therapeutic intervention (Figure 2). 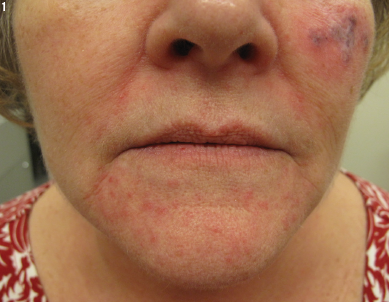 Periorificial dermatitis (POD) is an inflammatory skin disorder that is most common in women between the ages of 16 and 45. Children between the ages of 7 months and 13 years can also be affected. This condition manifests as clusters of 1-2 mm erythematous papules, papulovesicles, or papulopustules that can coalesce to form larger plaques. Minor scale may be present. Facial involvement most commonly occurs in the perioral region with a characteristic sparing of a narrow zone around the vermilion border of the lips. The perinasal and periorbital areas are also frequently involved. Lesions can concurrently involve the forehead, cheeks, chin, and/or glabella. Patients may be asymptomatic or have mild to moderate burning or pain. Pruritus is not a prominent feature.1

The exact etiology is unknown, however prolonged use of topical corticosteroid is perhaps the most frequent inciting factor reported in the pathogenesis of POD. Patients will give a history of the rash improving after beginning treatment with topical corticosteroids with recurrence upon cessation of treatment. The recurrent rash is often worse than the original. Other agents that have been implicated include oral contraceptive pills, hormonal fluctuations, fluoridated and tartar control toothpaste, moisturizing creams especially those with a petrolatum or paraffin base, cosmetics, mercury sensitization from amalgam fillings, and inhaled and systemic corticosteroids.1 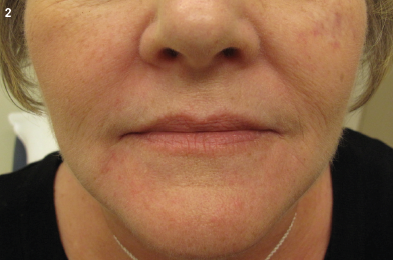 The association between fluoride and POD is not well established. Fluorinated corticosteroids have been particularly linked to POD. However, this may be secondary to their high potencies rather than a direct effect of fluoride since use of non-fluorinated high potency steroids has also been reported in patients with POD.2 A few case reports have shown a link between the use of fluoridated dental products and POD. In such cases, switching to non-fluoridated products lead to significant improvement in symptoms within a few weeks.3

In addition to fluoride, other irritants commonly used in toothpaste (ie, tartar control agents) have been linked to POD. One study of 20 women reported development of POD 1-2 weeks following initiation of tartar control toothpaste with marked improvement within 1-6 weeks upon discontinuation.4

If the patient has been using topical steroids on the face, treatment begins with gradual cessation with tapering of potency over several weeks to avoid rebound flare. Patients should be made aware that even gradual taper of corticosteroids may cause a temporary flare-up. Additional triggers should be identified and avoided. In particular, new toothpastes or dental products associated with the onset of the rash should be discontinued. In our patient, we suspect that the high fluoride content in her prescription toothpaste may have been the cause of her rash. Indeed, discontinuation of that product was followed shortly by complete resolution of her rash without need for other interventions.

In addition to avoidance of possible triggers, patients with periorificial dermatitis may benefit from systemic and/or topical therapies. Oral tetracyclines are the most effective medications. Recommended regimens include tetracycline 250-500 mg bid, doxycycline 50-100 mg bid, and minocycline 50-100 mg bid for 8 weeks. Erythromycin 250 mg bid for 4-6 weeks can be used in children and pregnant women. Topical treatments are generally less effective than oral antibiotics. Of the topical treatments studied, pimecrolimus 1% cream bid for 4 weeks has the most data supporting its use in POD.5 Topical antibiotic regimens include 1.5% to 2% erythromycin solution bid for several months, 0.75% metronidazole gel bid for 14 weeks, and 1% metronidazole cream bid for 8 weeks.1

POD often follows a chronic course with periodic exacerbations without treatment. However, spontaneous resolution has been reported.1 While most patients improve within 2 months after beginning treatment, recurrences are not uncommon. ■