A Patient with Advanced Dementia

Mr. P is an 87-year-old man who has had dementia of the Alzheimer’s type for more than ten years. He has lived with his daughter, Mrs. S, and her husband for the past seven years since the death of his wife. Mrs. S brings him to his primary care physician to ask if anything can be done to help him.

Mr. P requires assistance with bathing, dressing, and meals. He can eat foods such as sandwiches with his hands but can no longer hold utensils and must be hand-fed in order to consume enough food. He has been incontinent of bladder and bowel functions for the past three years and often takes off his adult diapers. Mr. P calls his daughter by his wife’s name, and Mrs. S feels that he doesn’t really recognize her or her husband. He speaks only a few words and often repeats the same word over and over again when people speak to him. Mrs. S has hired a private aide to help her provide care for her father, as he does not like to take a shower. He has difficulty transferring into the bathroom and needs a wheelchair to travel more than a few blocks from home.

Mrs. S worries that her father sleeps more than 12 hours a day and no longer appears to react to her, her children, or her grandchildren. He used to enjoy listening to jazz music and would smile and move around. Now, he no longer seems to appreciate that the music is playing. Mrs. S tries to keep Mr. P active, but he often sleeps through family visits, movies, music, and her attempts to read or talk to him.

Mrs. S worries that her father is declining and asks if anything can be done to make him more animated. She promised her mother that she would never put her father in a nursing home, but now she wonders if he needs more care than she can provide. Mrs. S asks the doctor for advice about what to do for Mr. P in his severely impaired state. 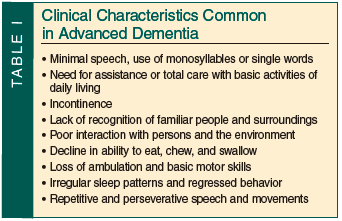 Erikson1 described the major crisis of late-life as “integrity versus despair.” Helping an older adult maintain integrity throughout the process of aging is a significant aspect of geriatric care. Dementia adds a new dimension to the task of maintaining integrity during a period of tremendous loss. Alzheimer’s disease (AD) is progressive in nature, with a gradual decline in all aspects of memory and function. For those patients who live longer, total dependence and loss of even the ability to recognize loved ones will result2-4 (Table I).

Dementia has a major impact on society. The costs of caring for persons with dementia exceed $100 billion per year in the United States alone, and that amount does not include the formidable costs of informal care provided by family members and loved ones.2,4 The emotional toll and burden of caring for a relative with dementia is immense. This includes emotional distress, economic burden, lost work time, and strain related to balancing the needs of child care and caregiving for the older adult.4

Families, and women in particular, provide 70-80% of care for frail older adults, with repercussions on the caregivers’ life and health.2,4 Primary caregivers are often spouses who are elderly and have medical problems themselves. Daughters frequently step in when spouses are not present.4 Caregivers must reconcile the demands of different spheres of life: personal; family; social; paid employment; and caring. These involve juggling, negotiations, adjustment, and readjustment. Caregivers must adopt a number of strategies to reconcile the competing demands of their roles of being master managers, organizers, and planners. There are three major objectives: (1) providing sufficient assistance; (2) maintaining the health and well-being of the person being cared for; and (3) maintaining the caregiver’s own health and well-being. Caregivers need practitioners who understand them and professionals who can provide them with information, support, advice, and empathy.2

Families often find it difficult to discuss end-of-life care or to plan for illness.2 Elderly parents assume that their adult children can make legal decisions for them, and often these adult children take for granted that their parents have done the required planning. Misunderstandings, lack of ability to communicate, and cultural or religious views can all interfere with the quality of life for the elderly person.3,4 Healthcare professionals must be aware of these issues and should encourage healthy aging adults to begin a dialogue and make their families aware of their plans and healthcare choices. The risks, benefits, and outcomes of artificial feeding, hydration, mechanical ventilation, and cardiopulmonary resuscitation for a patient with advanced dementia and a limited life expectancy should be discussed with the family. Family support and education is vital2,4,5 (Table II). 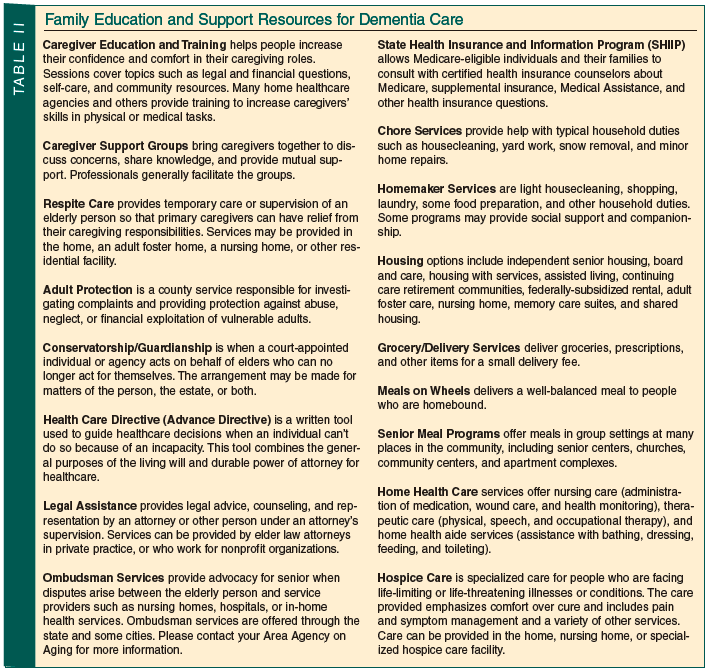 Medications have some role in advanced dementia, particularly in delaying the need for nursing home placement by 4-6 months as compared to those patients given placebo.6 Food and Drug Administration (FDA)–approved drugs include the cholinesterase inhibitors tacrine, donepezil, rivastigmine, and galantamine. Several are available in once-daily oral formulations and one, rivastigmine, may be given as a daily transdermal skin patch. They have been shown to have modest effect on cognition and function in patients with AD of mild-to-moderate severity. Tacrine is no longer recommended for routine use because of hepatic toxicity. Donepezil and galantamine are metabolized by liver cytochromes. Rivastigmine level is affected by renal clearance.4,6

Memantine is another cognitive enhancer that is approved for moderate-to-severe AD.7 This agent has a unique mechanism of action; it is a noncompetitive N-methyl-D-aspartate (NMDA) receptor antagonist, interacting with the excitatory neurotransmitter glutamate. Memantine has been shown to slow the deterioration of AD, as well as to temporarily enhance cognition and activities of daily living when added in combination with donepezil. Memantine has minimal drug-drug interactions and is renally excreted.7

As would be expected with cholinesterase inhibitors, common side effects in clinical trials are associated with cholinergic excess, particularly nausea and vomiting, but these symptoms tend to be mild-to-moderate in severity for all agents. Additional cholinergic side effects include muscle cramps; bradycardia, which can be dangerous in individuals with cardiac conduction problems; decreased appetite and weight; and increased gastrointestinal acid, a particular concern in those with a history of ulcers.6 Finally, cholinesterase inhibitors may induce or exacerbate urinary obstruction, worsen asthma and chronic obstructive pulmonary disease, cause seizures, induce or worsen sleep disturbance, and exaggerate the effects of some muscle relaxants during anesthesia.6

It is uncertain how long patients should be treated with cholinesterase inhibitors. Data from placebo-controlled clinical trials have demonstrated benefits over placebo for 6 months to 2 years with donepezil, 1 year with rivastigmine, and for up to 6 months with galantamine.2,4,6 In practice, the decision whether to continue treatment with cholinesterase inhibitors is a highly individualized one. Reasons that patients choose to stop taking these medications include side effects, adverse events, lack of motivation, lack of perceived efficacy, and cost. Individual patients may be observed to have some stabilization of symptoms or slowing of their decline. Under these circumstances, a physician might consider continuing the medication.2 Conversely, a patient who is declining rapidly despite taking cholinesterase inhibitors may be considered a medication nonresponder, and the medication can be discontinued. In advanced dementia, a patient may develop swallowing problems, and medication use may be discontinued for comfort and safety reasons.6

Memantine is FDA-approved specifically for moderate-to-severe Alzheimer’s dementia.7 Treatment begins at 5 mg once daily, with the dosage increased by 5 mg/day every week until a target dosage of 10 mg twice daily is reached. One study demonstrated efficacy at a dosage of 10 mg/day; the effects of dosages above 20 mg/day have not been studied. Because memantine is cleared primarily by the kidneys, lower doses of 5-10 mg daily should be considered in patients with compromised renal function.7

Advanced dementia is a state for which comfort care is often the best goal. The family and caregivers should be provided with support and education regarding the natural deterioration that occurs in dementia2-5 (Table II). Knowledge that maintaining the patient in a calm and pleasant environment with exposure to familiar possessions and activities will maintain dignity at the end of life. Information for families and caregivers may be downloaded from the Alzheimer’s Association website at www.alz.org.

The primary care physician reviewed Mr. P’s medication regime and discontinued the simvastatin, lisinopril, aspirin, and memantine. The metoprolol dose was reduced to 50 mg once daily. Mr. P was found to be well nourished but severely impaired. He was unable to answer any questions or follow instructions. Laboratory tests, including a complete blood count and chemistry panel, were within normal limits. Mrs. S was counseled regarding the natural progression of AD and was reassured that her father was being cared for very well. Mrs. S was referred to a local caregiver support group and was given information from the Alzheimer’s Association. She was relieved to hear that she was providing good care and decided to keep her father at home. After discussion with the primary care physician, she completed forms indicating that her father would not be resuscitated in case of cardiac arrest.