Neuroblastoma in a 19-Month-Old Girl

A 19-month-old girl with delayed speech and motor milestones was sent to our emergency department (ED) for evaluation of lumps on her head (A). A painless lump was first noticed on the girl’s forehead 2½ weeks prior to the visit and was evaluated by her pediatrician, who felt that the lump was a result of trauma from a fall. 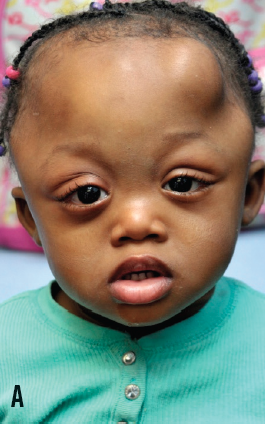 Since the lump had increased in size over time, she was brought to an ED other than ours, where a lipoma was suspected. She then was referred to surgery for possible resection. A computed tomography scan of her head showed multiple lytic lesions in the skull and large soft tissue masses projecting intracranially, with effacement of the temporal lobe (B).

In our ED, multiple lumps were noted on her head, the largest one on the left forehead. She had been losing weight and had been less active, but there was no history of fever, headache, bone pain, or abdominal distention.

The girl was treated with multiagent chemotherapy, surgical resection of the left adrenal tumor, high-dose chemotherapy with autologous stem cell transplantation, and radiation therapy, followed by maintenance therapy with anti-GD2 monoclonal antibody and isotretinoin. She had a good initial response to treatment, with near complete resolution of the head masses (D), but the neuroblastoma recurred 15 months after her diagnosis, while she was receiving maintenance therapy, with progression of the multiple bone metastases. She now is receiving palliative chemotherapy.

Neuroblastoma arises from the neuroectodermal cells and therefore can be found in many different sites that harbor these cells. The initial symptoms of neuroblastoma frequently are nonspecific and can mimic a wide variety of more common pediatric conditions, owing to the numerous possible sites of the primary tumors and metastases. In addition, some symptoms can be attributed to the associated metabolic disturbance, adding to the difficulty in early detection of the tumor.1

Presenting signs and symptoms of neuroblastoma depend on tumor location. The most common site is the abdomen, including adrenal tumors. Nearly 50% of patients with neuroblastoma have metastatic disease at the time of diagnosis, most commonly involving the bone marrow, bones, or liver,2,3 as in the case we describe.

Because neuroblastoma is the most common extracranial solid cancer of childhood, with nearly 50% of cases diagnosed in infancy and 90% by 5 years of age,2 pediatricians should have a high index of suspicion for neuroblastoma, especially in infants or young children with bone pain or swelling.