Dr Aravapali is a pediatric resident and Dr Sahai is a clinical educator and assistant professor at Children’s Hospital of Michigan in Detroit.

A 3-year-old previously healthy boy presented to the emergency department with a 1-day history of fever, drooling, difficulty swallowing, vomiting, and respiratory distress. Upon arrival, the patient was sick-appearing and was using tripod positioning; he also was tachycardic and tachypneic with labored mouth-breathing and had moderate pooling of oral secretions. He had completed all the immunization series for his age. Pertinent physical examination findings included enlarged anterior cervical lymph nodes bilaterally, neck in extended position, and suprasternal retractions with referred stertorous upper airway sounds.

Out of concern for airway compromise, the patient underwent elective intubation. At this time, a photograph of the epiglottis was taken (Figure). The patient was transferred to the pediatric intensive care unit (PICU) on a ventilator in stable condition. 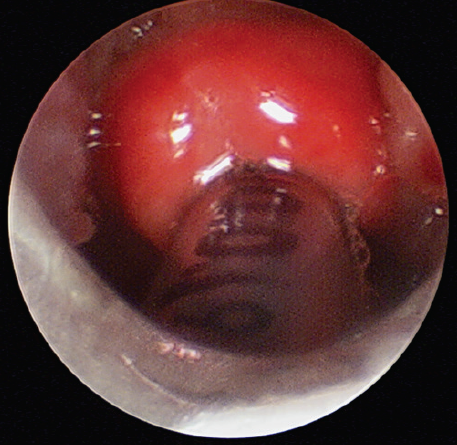 The patient remained intubated in the PICU for 2 days and was treated with ceftriaxone, vancomycin, and clindamycin. Vancomycin and clindamycin later were discontinued based on the availability of culture results. Direct laryngoscopy/bronchoscopy showed erythematous, inflamed, and swollen epiglottis, false vocal cords, and arytenoid cartilages without exudate. Blood culture testing was positive for Haemophilus influenzae type f.

The boy was discharged on a 7-day course of amoxicillin-clavulanate after having received parenteral antibiotics for 5 days. 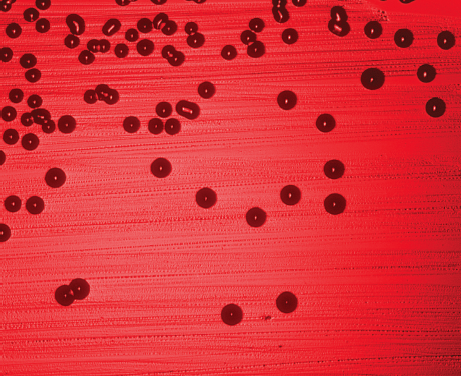 The epiglottis is a leaf-shaped elastic cartilage with overlying loose connective tissue that arises from the posterior tongue base and covers the laryngeal inlet during swallowing. Acute inflammation of the epiglottis can quickly and easily spread to the attached aryepiglottic folds and the arytenoid soft tissues, causing a more generalized supraglottitis.

Epiglottitis often presents with fever, sore throat, dysphagia, drooling, stridor, toxic appearance, and restlessness. Children with epiglottitis often assume the tripod position—leaning forward while bracing the arms and extending the neck—to maximize airway size. Vocalization is quite painful, and the patient may speak with a muffled or hot potato voice. Epiglottitis is a medical emergency that can lead to the rapid onset of life-threatening airway obstruction.

In the United States, the first polysaccharide vaccine to protect against H influenzae type b (Hib) was introduced in 1985. The polysaccharide-protein conjugate Hib vaccine, which induces immunity at a younger age, was licensed in the United States in 1987. The widespread introduction of the Hib conjugate vaccine in 1988 dramatically changed the epidemiology of acute epiglottitis.1 The overall annual incidence of epiglottitis has fallen dramatically in the Hib vaccine era, from approximately 5 cases per 100,000 to 0.6 to 0.8 per 100,000.2,3

H influenzae is classified into capsulated and noncapsulated microbiologic groups. Noncapsulated strains are nontypeable. Capsulated strains are further classified into 6 serotypes, a through f, based on antigenically distinct polysaccharide capsules. In the prevaccination era, Hib was the most commonly observed serotype at 64.9%, while nontypeable H influenzae comprised 29.9% of all isolates.4 H influenzae type f was the second most common typeable strain.5 Of isolates in the vaccination era, 70.3% are nontypeable, 13.6% are type f, and 9.4% are type b. While a few studies have suggested an increase in invasive H influenzae disease from nontypeable strains, no evidence exists to suggest a substantial or sustained increase.6

Other infectious agents in the vaccination era associated with epiglottitis include non–type b H influenzae, group A streptococci, Streptococcus pneumoniae, Staphylococcus aureus, Klebsiella pneumoniae, Haemophilus parainfluenzae, and β-hemolytic streptococci (groups B, C, and F). Candidal and viral infections (herpes simplex type 1, varicella-zoster, and parainfluenza) also have been implicated, particularly in immunocompromised individuals. Acute epiglottitis has a significant male predominance, with 63% of children with it being boys.10 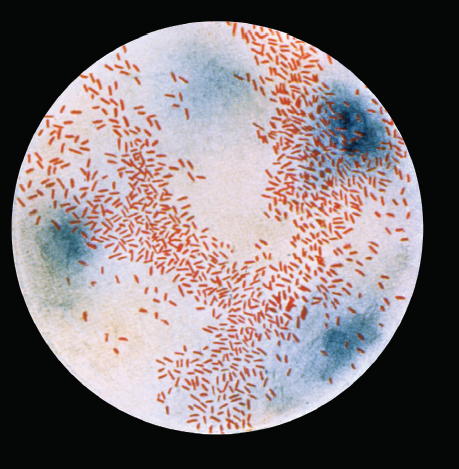 With the reduction in the incidence of pediatric epiglottitis, it is important to be aware of other conditions with a similar presentation, such as upper airway foreign body, esophageal foreign body, anaphylactic reactions, tracheitis, and retropharyngeal infections.

When epiglottitis is suspected, measures to secure the airway are the primary focus of intervention. Humidified oxygen and racemic epinephrine may be administered until the airway has been secured. It is also recommended that all other diagnostic tests and the placement of intravenous lines be postponed until the airway is secured, because the danger of partial airway obstruction worsening to complete obstruction and respiratory arrest is greater in an upset, crying child. Airway visualization should be performed in a controlled setting with readiness for intubation, such as an operating room, in the presence of an otolaryngologist and anesthesiologists who can secure the airway emergently if needed.

It is reasonable to forgo intubation and closely monitor older children and adults without respiratory distress and with at least a 50% laryngeal lumen on flexible laryngoscopy. In patients who do not require intubation at the outset, rapid respiratory compromise may develop in a delayed manner, with the majority of delayed compromise occurring in the first 12 hours of treatment, requiring emergent airway intervention.10 In one series of patients with epiglottitis, 69% of children needed an artificial airway.10

Broad-spectrum antibiotic coverage, typically a third-generation cephalosporin, is used. In the series from Boston, either ampicillin-sulbactam or ceftriaxone was effective in the successful treatment of all patients.9

Hib causes as many as 95% of serious invasive H influenzae infections, including blood infections, meningitis, epiglottitis, cellulitis, pneumonia, arthritis, osteomyelitis, and pericarditis. Children between the ages of 2 to 4 months and 2 to 3 years are most susceptible to these serious infections.

Vaccination is the best way to prevent and control Hib. A 4-dose schedule (at 2, 4, 6, and 12 to 15 months) is recommended for most Hib vaccines. Still, despite the dramatic decrease of Hib-related infections after the introduction of the vaccine, Hib can cause epiglottitis despite adequate vaccination.9 It is important to measure Hib antibody levels in such patients to help determine whether they did not produce any antibody (vaccine failure) or whether they produced anticapsular antibody that afforded inadequate protection to Hib.

Vaccine failure may result from inadequate handling and storage of vaccines, which can cause a loss of antigenic epitopes or uncoupling of conjugation, leading to poor immunogenicity.

Children who experience Hib disease despite vaccination and adequate antibody levels may have a defect in immunologic priming, leading to a qualitative defect in Hib-specific memory cells.12 Reduced affinity of the antipolysaccharide capsule antibodies leads to poor functional activity and hence disease susceptibility despite vaccination. Future vaccine development efforts may need to be directed at type f and nontypeable strains of H influenzae. n