Giant Ovarian Cyst in an Adolescent With PCOS

A 17-year-old girl with a recently discovered ovarian cyst was referred to the emergency department (ED) by her primary care provider. A recent imaging study had shown the cyst to be increasing in size, raising a concern for malignancy. The adolescent’s left-sided, 14-cm ovarian cyst had been found via ultrasonography 6 weeks ago, after which she received a clinically presumed diagnosis of polycystic ovary syndrome (PCOS). At that time, her primary care provider started her on metformin while the girl waited to see a specialist.

The patient had experienced left-sided lower abdominal pain and bilateral lower back pain radiating to back of her right thigh for the last 2 months. The pain was exacerbated with movement. She has a history of asthma, primary amenorrhea, and metabolic syndrome.

Upon presentation, she had no fever, nausea, vomiting, difficulty breathing, dysuria, hematuria, weight loss, fatigue, or constipation. She denied sexual activity, smoking, or drinking alcohol. Her family history was unremarkable except for a grandmother with a history of veno-occlusive disease. Her surgical history was unremarkable. She denied any food or medication allergies. Her current medications were metformin, lisinopril, and inhaled albuterol.

Physical examination revealed an obese, hirsute adolescent girl. Her oral temperature was 36.7°C, heart rate was 85 beats per minute, blood pressure was 126/81 mm Hg, respiratory rate was 14 breaths per minute, and oxygen saturation was 100% on room air. She weighed 122 kg and was 174 cm tall, corresponding to a body mass index (BMI) of 40.3 kg/m2, well above the 95th percentile on age- and sex-specific growth charts. She had facial hair, facial acne, and acanthosis nigricans around the neck and axillary areas.

Her abdomen was soft, nontender, and slightly protuberant without organomegaly; bowel sounds were heard in all quadrants. She had mild tenderness around the lumbosacral region (L4, L5, and S1). Her secondary sexual characteristics were appropriate for her age. The rest of the physical examination findings were normal. 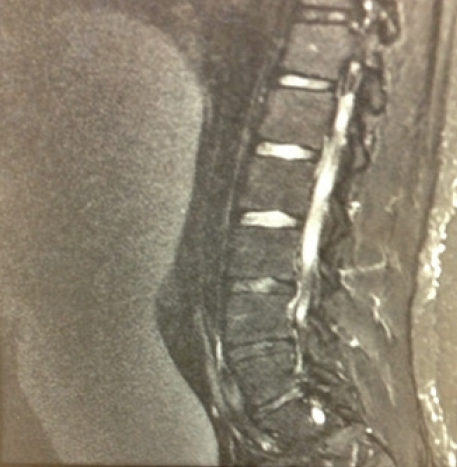 A magnetic resonance imaging (MRI) scan of the lumbosacral spine (Figure 1), which she had undergone for her back pain before her arrival in the ED, showed a large cystic mass along the anterior abdominal wall, likely ovarian in origin and concerning for malignancy. The MRI also demonstrated degenerative disease of multiple disks in the lumbosacral region, with central canal stenosis.

Abdominal and pelvic ultrasonography, repeated in the ED, showed a small hemorrhagic cyst within the left ovary (Figure 2) and a large cystic lesion measuring up to 30 cm within the pelvis, possibly arising from the left ovary, extending into the left upper quadrant, and having a mass effect on adjacent structures (Figure 3). 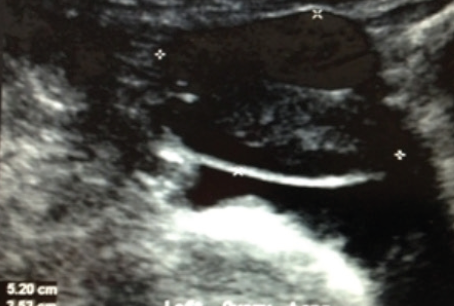 Results of a complete blood count and a comprehensive metabolic panel were normal. Urinalysis results were normal, and a urine pregnancy test was negative. Her tumor markers were within normal limits (β-human chorionic gonadotropin, < 2 mIU/mL; α1-fetoprotein, 2 ng/mL; carcinoembryonic antigen, < 0.5 ng/mL; and inhibin A, 39 pg/mL), except for a slight elevation of levels of lactate dehydrogenase (231 U/L) and cancer antigen 125 (84 U/mL).

The patient was taken to the operating room for elective diagnostic laparoscopy, which revealed a ruptured large ovarian cyst on the left and a polycystic ovary on the right. A large amount of clear fluid was aspirated from the peritoneal cavity. Laparoscopic left salpingo-oophorectomy and drilling of the right ovary were performed.

The surgical pathology report defined the mass as a serous cystadenoma with no malignant cells; the ovarian parenchyma had a homogeneous appearance, with multiple cystic cavities ranging from 0.5 cm to 4 cm in the greatest dimension, suggestive of polycystic ovary disease. Fallopian tubes were normal. 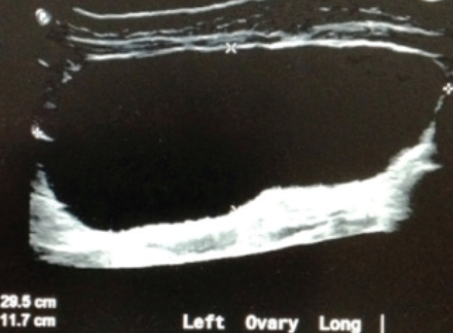 Figure 3. A large cystic lesion in the pelvis extended into the left upper quadrant.

The patient’s postoperative course was uncomplicated. Laboratory testing of thyrotropin (2.76 mIU/L), prolactin (11.5 µg/L), total testosterone (32 ng/dL), sex hormone–binding globulin (1.5 µg/mL), free androgen index (8.5), dehydroepiandrosterone sulfate (61 µg/dL), and 17-hydroxyprogesterone level (37 ng/dL) were done to exclude other causes of hyperandrogenism; all were within normal limits. At the 5-month follow-up visit, she was doing well, was off lisinopril, and had resumed menses after doubling the standard 10-mg oral dose of medroxyprogesterone acetate. Her parents had refused to start her on estrogen-containing oral contraceptives because of her younger age, her family history of veno-occlusive disease, and the results of blood tests that revealed that she is heterozygous for factor V Leiden.

Ovarian tumors account for approximately 1% of all neoplasms in children and adolescents, and 75% to 85% of such lesions are benign.2,3 Tumors should considered particularly in patients with solid ovarian masses; in patients with cystic and solid components on ultrasonography; in premenarchal girls with any ovarian cyst and associated signs or symptoms of hormonal stimulation; and in patients with presumed functional ovarian cysts that do not resolve during serial monitoring. Up to 15% of all ovarian cystic lesions are neoplastic.

Children with an ovarian mass might have no symptoms, and the mass might be detected incidentally or during a routine examination. Other children present with lower abdominal pain or an increase in abdominal girth that may be accompanied by nausea, vomiting, dysuria, increased urinary frequency, urinary retention, constipation, weight loss, menstrual abnormalities, dyspnea, orthopnea, ascites, supine hypotension, hydronephrosis, or pleural effusion.4-7 Ovarian masses in children more frequently are associated with acute complications such as torsion, hemorrhage, and rupture.

Ultrasonography is the primary imaging study for the assessment of an ovarian mass.1,5 On an ultrasonogram, a benign cyst typically is unilocular, with a thin, smooth wall and no solid elements. Although some benign lesions may have complex cystic features such as thickened walls, septations, and solid components, these are also features of malignant masses.8 MRI or computed tomography scans can provide further information in such cases.

The appropriate management of an ovarian mass depends on the patient’s age and presenting symptoms and the appearance of the lesions on imaging studies. Extensive laboratory evaluation usually is unnecessary in cases of a simple ovarian cyst. When malignancy is suspected, tumor markers such as cancer antigen 125, α1-fetoprotein, human chorionic gonadotropins α and β, carcinoembryonic antigen, inhibin, lactate dehydrogenase, estradiol, and testosterone can assist in making a definitive diagnosis and in guiding the treatment approach.5,6 The specificity and sensitivity of these tumor markers varies with lesion type; for example, patients who have serous cystadenomas may have normal laboratory test results.

In cases of an ovarian mass that is growing, persistent, or symptomatic, or when malignancy is suspected, surgery is required. The goals of surgical therapy are first, removal of the neoplasm and appropriate staging, and second, preservation of fertility.5,6,8

While uncommon in children and adolescents, giant ovarian cysts larger than 15 cm in diameter can be encountered. Very few cases of giant serous cystadenoma in adolescents have been reported9-15 (Table); the patient’s medical history was unremarkable in most reported cases. Grapsa and colleagues16 tallied 14 cases of unilateral serous cystadenoma, with sizes ranging from 6 to 21 cm, in their retrospective analysis of 86 cases of ovarian tumor in adolescents; accordingly, the medical history was unremarkable in all patients with cystadenoma in their study. 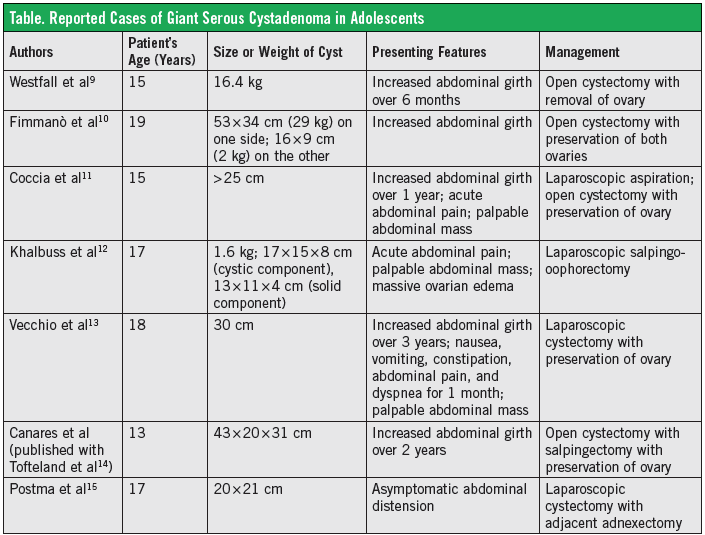 Ovarian mass is an uncommon finding in a female adolescent. In adolescents with ovarian masses, physiologic ovarian cysts are most common, while ovarian neoplasms are relatively infrequent. Physicians should be aware of the clinical manifestations, complications, evaluation, and proper management of ovarian masses, particularly in patients who have or are suspected to have PCOS and who present with lower abdominal pain, increased abdominal girth, or palpable abdominopelvic mass.