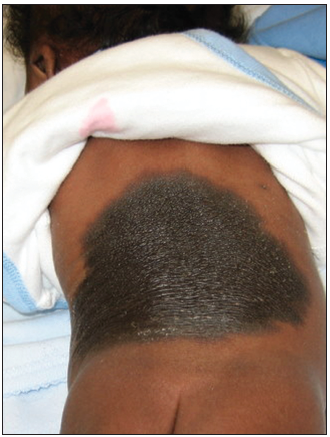 This infant was noted to have a giant melanocytic nevus at birth. Giant congenital melanocytic nevi (GCMN) can be recognized not only by their increased size (greater than 20 cm) but also by their increased cellularity and ability to affect deep dermal layers and other subcutaneous tissue. 1-4 Acquired nevi generally do not permeate the deeper dermal layers. Occasionally, GCMN may result in dysplasia of intraepidermal nevus cells, inflammatory spread of nevus cells, and proliferative dermal nodules.1 Giant nevi can also be described based on their location eg, bathing trunk nevus, vestlike nevus, garment nevus, vest with collar nevus, shoulder stole nevus, and capelike nevus).1 Those nevi that lack pigmentation at birth usually darken over time.1

Between 2.8% and 8.5% of GCMN progress to malignant melanoma later in life.3 Their surgical removal, which is best done early in life (when skin elasticity is greatest), is somewhat controversial.6 Excision is usually recommended in cases in which it can be completed in fewer than 3 stages.1 However, this may leave large, open wounds that are difficult to close, and the cosmetic result may be poor. Split-thickness skin grafts, full-thickness skin grafts, tissue expanders, flaps, and artificial skin substitutes are often used to cover the wounds, lessen pain and morbidity, and decrease scarring.7 When tissue expansion is required, surgery before the child is 2 years old (before skin elasticity begins to decrease) offers the best cosmetic results.6

Nonsurgical treatments include dermabrasion, laser ablation, curettage, and chemical peels as well as a variety of laser treatments.1 Because satellite nevus cells may become malignant, it is recommended that patients be monitored by a dermatologist after these procedures.5 The risk of neurocutaneous melanosis is increased in patients with multiple satellite nevi or GCMN on the trunk, face, or head.1

Other complications of GCMN may include pruritus, ulceration, psychosocial stigmatization, and poor wound healing from surgical excision.4,7