A 57-year-old white female presented with an 8-month history of a generalized eruption of hyperkeratotic, verrucous papules beginning in her left axilla with subsequent spread to her back, trunk, face, and all 4 extremities. She had been diagnosed with verruca vulgaris by another dermatologist and treated with topical salicylic acid that resulted in second-degree burns to areas of application, which prompted her to seek emergency medical attention. Past medical history was positive for basal cell carcinoma of the left lower thigh, an abnormal Pap smear of undetermined significance, a benign mass of the right breast, and breast augmentation. She denied any history of immunocompromise and recent HIV testing was negative. Review of symptoms was positive for diffuse pruritis and mild dysphagia with solid food

Physical examination. Upon examination, numerous flesh- to tan-colored verrucous papules were noted, covering approximately 90% of her body surface area. Well-demarcated second-degree burns were also present on the right thigh and bilateral upper arms. The palmar surface of each hand was diffusely thickened with a coarse texture. 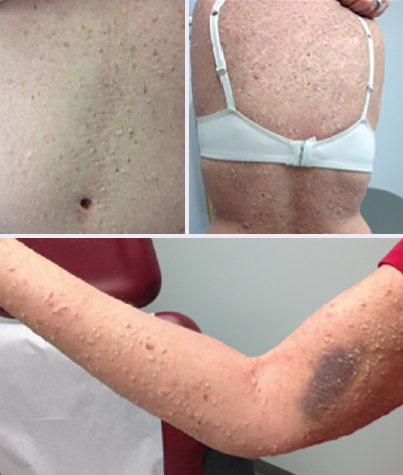 Laboratory tests. Endoscopy revealed a large, friable, polypoid lesion located at the distal esophagus and gastroesophageal junction. A biopsy was performed and was consistent with moderate to poorly differentiated adenocarcinoma. A CT scan of the thorax with IV contrast was then performed and a 2.1 cm right hepatic lobe mass identified. The subsequent CT guided needle biopsy was consistent with metastatic adenocarcinoma, sharing the same histologic characteristics of the primary esophageal tumor.

Histopathology. Two prior skin biopsies by different dermatologists were read as verruca vulgaris and seborrheic keratosis with verrucous changes. A repeat 4 mm punch biopsy taken from the back was consistent with verruca vulgaris, and a shave biopsy taken from the thigh was consistent with seborrheic keratosis with verrucous changes. No evidence of epidermodysplasia verruciformis was found on any biopsy performed, and human papilloma virus typing of the lesions was also negative.

Treatment. The patient was started on oral prednisone 40 mg daily, oral hydroxyzine 25 mg to 50 mg daily, and a twice-daily topical application of CeraVe moisturizing cream mixed with clobetasol 0.05% solution to alleviate the intense pruritus associated with her condition. A Medi-Port was placed and oncology began to administer 5-florouracil and cisplatin. After the first cycle of chemotherapy, a striking improvement was noted in her skin with a decrease in both the size and number of seborrheic keratoses, as well as a slight improvement in the coarse texture of her palms. In addition, her dysphagia and recent abdominal pain had almost completely resolved. After 4 cycles of chemotherapy the patient’s primary tumor and liver metastasis were undetectable. She has undergone repeat PET and CT scanning, which after 2 years has not been able to detect any recurrence of her malignancy. The seborrheic keratoses have completely resolved, the coarse texture of her palms is significantly improved, and she has not experienced any recurrence of the pruritis.

Discussion. Paraneoplastic syndromes are rare disorders that are triggered by an altered immune system response to a neoplasm. They are defined as clinical syndromes involving nonmetastatic systemic effects that accompany malignant disease.1,2 In order for any cutaneous alterations to be considered a paraneoplastic syndrome, there are 6 criteria that must be met: (1) onset near the beginning of the neoplasia; (2) both following parallel courses; (3) the dermatosis must not be part of a genetic syndrome; (4) the dermatosis accompanies a specific tumor; (5) the cutaneous disease is common; (6) there is a strong degree of correlation with the neoplasia.3

The sign of Leser-Trélat (LT) is a paraneoplastic syndrome characterized by a sudden eruption of multiple seborrheic keratoses or a rapid increase in the number and size of preexisting seborrheic keratoses, with or without associated pruritis.4,5 It is most commonly linked with adenocarcinomas of the GI tract, but also of the breast, lung, ovary, uterus, kidney, liver, and pancreas.6 There are also cases reported in association with squamous cell carcinomas, leukemias, and lymphomas.4,5,7

It is speculated the eruption of seborrheic keratoses in LT is driven by endogenous mediators of hyperproliferative skin disease such as epidermal growth factor, transforming growth factor-alpha, or amphiregulin, which may function in a local autocrine manner or travel through the circulation to affect the epidermis in a diffuse manner. A reduction in host defenses and dysregulation of epidermal cellular turnover are 2 other proposed mechanisms for LT.2,3,6

The reliability of LT as a true paraneoplastic syndrome has been questioned due to the common occurrence of seborrheic keratoses among the elderly whom also have a greater incidence of the malignancies associated with LT, allowing for a higher likelihood of coincidence.1,4 A florid eruption of seborrheic keratoses has also been reported in nonmalignant conditions such as HIV infection, pregnancy, and after heart transplantation.1 Additionally, LT is a very rare occurrence and no guidelines exist to define a timeframe or what constitutes a significant increase in number and size of the seborrheic keratoses.4

Evidence favoring a link between LT and underlying malignancy includes reports of LT occurring simultaneously with more traditional paraneoplastic conditions such as acanthosis nigricans and tripe palms.3 There are also case reports of LT among patients in their 20s who would be highly unlikely to develop numerous seborrheic keratoses.4 Regardless of its acceptance in the literature, a florid eruption of seborrheic keratoses warrants investigation for underlying malignancy utilizing appropriate imaging techniques and tumor-screening tests.

Treatment of LT is directed toward the underlying malignancy with approximately 50% of patients experiencing resolution of the seborrheic keratoses after the initiation of chemotherapy or radiation.1,4,5,7 Curettage, laser therapy, cryosurgery, electrocautery, or excision may also be employed in resistant cases or symptomatic lesions. Pruritis is typically severe and must also be addressed in these patients.4

Outcome of the case. Paraneoplastic syndromes, while rare, can provide key clues in the diagnosis of underlying malignancy. Recognizing these entities and acting quickly can aid in earlier detection of malignancy and improved patient outcomes. Our patient has been disease free for over 2 years and we will continue to monitor her along with her hematologist to screen for any sings of recurrence.