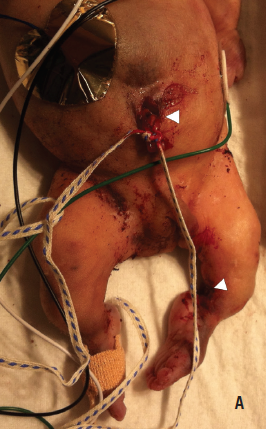 A 750-g infant boy was born at 33 weeks and 3 days of gestation to a 35-year-old mother. A cesarean section was performed because of preterm labor. The mother’s 4 previous pregnancies had resulted in 3 preterm births and 1 miscarriage. This pregnancy had been complicated by a prenatal diagnosis of severe skeletal dysplasia. At birth, the infant was noted to have short, deformed limbs; lacerations of the neck, umbilical base and ankles (A); and exophthalmos. Plain radiographs of the head and chest (B) and of the pelvis (C) showed poorly mineralized calvarium and short, broad, and crumpled humeri, radii, ulnae, and femora, findings consistent with a diagnosis of osteogenesis imperfecta (OI) type II. The patient died from severe respiratory failure at 2 hours of life.

Eight types of OI have been described. OI type I, the mildest and most common type, has a prevalence of approximately 1 in 30,000 live births in the United States. OI type II is reported to occur in approximately 1 in 60,000 live U.S. births, but the combined prevalence of the three severest forms that are recognizable at birth (types II, III, and IV) may be much higher. Only a few patients with types V, VI, VII, and VIII have been reported.

Type I collagen is the main component of bones and is also found in tendons, ligaments, skin, and the sclerae. Type I collagen fibers are polymers of tropocollagen molecules, whose triple helix comprises two α1 polypeptide chains and one α2 chain. OI most commonly is caused by a dominant mutation in the gene encoding the pro-α1 chains (COL1A1) or the pro-α2 chains (COL1A2)of type I collagen.1,2

Patients with perinatal OI type II usually die in utero or in early infancy. Severe fractures and pulmonary failure are typical and accelerate death in this group. Genetic counseling is indicated for affected families. Treatment of OI type II is supportive.

Dermatologic conditions are a rare manifestation of OI. The skin of patients with OI is stiffer and less elastic, with less hysteresis.3 On histologic investigation of skin biopsy specimens of patients with OI, dermal thickness is markedly reduced, and elastic fibers are more numerous and show more degenerative changes.4 Our patient’s deep lacerations of the neck, ankle, and periumbilical skin represented a rare and previously unreported dermatologic manifestation of OI.

We sent the patient’s peripheral blood for DNA sequence analysis, which showed a variation in the fragment containing exon 26 and flanking sequences of COL1A1. Sequencing revealed a nucleotide substitution of G to A that converted a codon for glycine (GGA) to a codon for arginine (AGA) at complementary DNA position c.1804. The analysis confirmed the diagnosis of OI type II.