Congenital Pseudarthrosis of the Clavicle 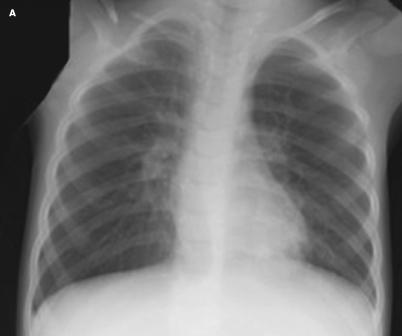 A 4-year-old boy with Down syndrome who underwent chest radiography while hospitalized for fevers, respiratory distress, and hypoxia was found to have an abnormality of the right clavicle. Radiographic results showed hyperinflation of the lungs without a focal infiltrate, indicative of a probable viral pulmonary process, and the incidental finding of a nonunion of the right clavicular bone without callous formation, consistent with congenital pseudarthrosis (A). The parents were not aware of the malformation. The patient had no history of arm or shoulder discomfort or recent or past trauma, especially no birth trauma.

On examination, the clavicular line was symmetric. There was no localized protrusion, tenderness, ecchymosis, erythema, or skin breakdown. The child had full range of motion of his upper extremities. Overall, tone was normal. No other skeletal abnormalities were noted. A chest radiograph taken of the patient in infancy confirmed the presence of pseudarthrosis of the right clavicle.

Congenital pseudarthrosis (also referred to as pseudoarthrosis) of the clavicle was initially described by FitzWilliams in 1910 as hereditary craniocleidodysostosis.1,2 To date, only about 200 cases worldwide have been reported3; the findings show a female predominance.2,4 This abnormality is typically isolated and unilateral, it predominantly occurs on the right side. When on the left side, the defect may be associated with dextrocardia, situs invertus, and cervical ribs.2,3 About 10% of cases are bilateral.2,5

The anomaly results from a failed union of the medial and lateral ossification centers of the clavicular bone6-8 and is present at birth.2 Although a clear cause is unknown,4,9 some familial cases suggest a genetic predisposition.2,10 Some have speculated that hormonal or environmental factors may disrupt the developing limb bud.11 Genetic syndromes, Floating-Harbor syndrome and Goltz syndrome, are associated with bilateral pseudarthrosis.4 A chromosome 10p microdeletion has been found in a patient with clavicular pseudarthrosis and other congenital abnormalities.4 Congenital pseudarthrosis of the clavicle has no known association with neurofibromatosis, which may manifest with pseudoarthroses of the tibia and other extremity bones.6 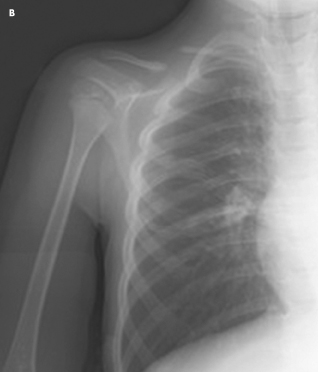 In patients with Down syndrome, clavicular abnormalities have been described as prominent conoid processes,12not specifically as pseudarthrosis. The anomaly in this child may be an independent skeletal difference or it may reflect a spectrum of clavicular anomalies associated with trisomy 21.

Affected patients have no pain, limitation of motion, or decrease in strength of the upper extremities and are neurovascularly intact.12 As the patient matures, a painless swelling over the middle third of the clavicle may develop.2 The diagnosis is usually made incidentally when reviewing radiographic imaging for other clinical concerns, as in this patient. Radiographs show separation in the mid-third region of the clavicle; the fragments have round, smooth edges, and no callous formation (B).6,11

Associated complications are rare and generally present later in life.10 Orthopedic surgery is recommended for patients with pain, cosmetic concerns that negatively affect self-esteem, or shoulder deformity that interferes with function.13 No interventions were recommended for this patient at this time.