Antiplatelet therapy, while efficacious in reducing the incidence of ischemic complications, can cause serious adverse reactions. Constant surveillance for rare adverse effects should be maintained as thienopyridines are used for “off-label indications.” Also, postmarketing surveillance may uncover potentially significant interactions with other common medications.1 Widespread recognition of uncommon adverse drug reactions from antiplatelet therapy is often delayed, as only 1% to 10% of these cases are reported to the US Food and Drug Administration (FDA).2,3 Because of their widespread use and the advent of newer generations of thienopyridines, more cases of adverse reactions from antiplatelet agents have been reported, varying from isolated thrombocytopenia to fatal hemorrhage.

An 89-year-old woman on warfarin for atrial fibrillation was admitted to a hospital after a fall. Evaluation in the emergency department did not reveal any cognitive or neurological deficits. The patient was afebrile and had normal vital signs. A computed tomography scan of her brain was negative for intracranial hemorrhage. Upon admission, she was given intravenous heparin for anticoagulation. Due to the increased risk of frailty and falls with warfarin therapy, this drug was discontinued and the patient was started on clopidogrel, a thienopyridine antiplatelet agent, on the second day of admission. She was discharged to home on the third day of admission.

One week later, a hematological workup conducted at her primary care physician’s office revealed a platelet count of 7 x103/µL (normal, 150-350 x103/µL). Because of severe thrombocytopenia, she was readmitted to the hospital for further evaluation and management. Drug-induced thrombocytopenia was considered at this point and clopidogrel was discontinued. After two units of platelet transfusion in the hospital, her platelet count increased to 84 x103/µL. A peripheral blood smear was negative for schistocytes and an enzyme-linked immunosorbent assay (ELISA) was negative for antiplatelet factor 4 antibodies and ADAMTS13 (a large protein involved in blood clotting). The patient had normal serum creatinine and lactate dehydrogenase (LDH) levels and normal liver function tests and prothrombin time. A bone marrow biopsy revealed normocellular marrow with increased megakaryocytes. On the third day after the platelet transfusion, the patient’s platelet count dropped to 28 x103/µL. Intravenous immunoglobulin (IVIG) therapy 400 mg/kg per day was initiated, and her platelet count improved. After 5 days on IVIG therapy, the patient’s platelet count remained steady at 118 x103/µL and IVIG was discontinued. She was discharged to home 24 hours after completion of IVIG therapy.

At a 2-week follow-up visit with a hematologist, the patient’s platelet count drastically fell to 10 x103/µL. Clopidogrel-induced autoimmune thrombocytopenia was suspected, and she was started on intravenous infusion of rituximab 375 mg/m2 weekly for 4 weeks along with subcutaneous injection of romiplostim 0.5 mcg x 3 doses (1 dose prior to rituximab infusion followed by administration on weeks 2 and 5). The patient’s platelet count increased to 372 x103/µL, and the levels maintained at 205 x103/µL after 2 months of treatment.

B. Thrombocytopenia associated with autoimmune disorders

Drug-induced adverse events and drug-drug interactions are common in the elderly. As we age, total plasma volume decreases and plasma drug concentration increases. The rising plasma concentration of drugs leads to increased efficacy up to a certain level, after which the efficacy of the drug diminishes and there is a concomitant rise in adverse reactions. The type, intensity, and duration of drug action may be affected, ranging from therapeutic failure to major drug toxicity. A wide divergence in the sensitivity of different systems to the same drug has been observed. Alterations in physiologic and homeostatic systems, including the autonomic system, baroreceptors, thermoregulation, and balance, have also been described. Most elderly patients are also on multiple medications, increasing the chance for drug-drug interactions.6 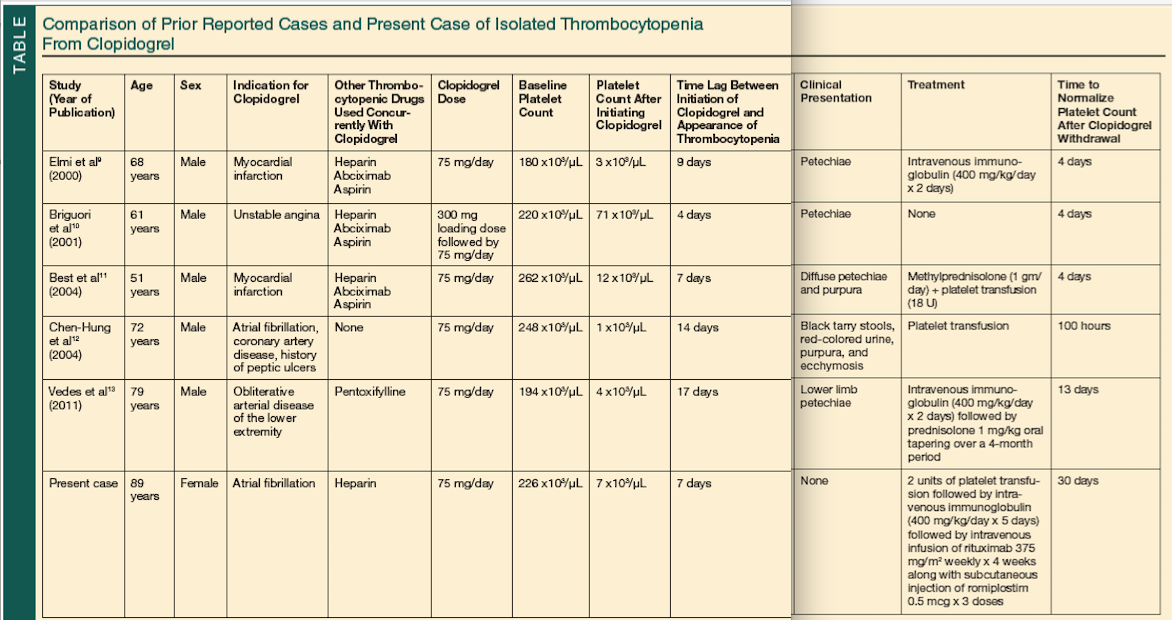 The main hurdle in diagnosing clopidogrel-associated thrombocytopenia is that this drug is almost always prescribed in conjunction with aspirin and heparin, making it difficult to clearly attribute the resulting thrombocytopenia to clopidogrel. Analyzing the clinical situation and acquiring necessary hematological investigations are crucial to the diagnosis.16

Platelet counts of <20 x103/µL, the absence of antiplatelet factor 4 antibodies, and bleeding rather than thrombosis ruled out heparin-induced thrombocytopenia in the case patient discussed in our article.17 Further, the absence of a fever, ADAMTS13 in the ELISA, and schistocytes in the peripheral blood smear, as well as a normal prothrombin time and normal LDH and serum creatinine levels, rendered thrombotic thrombocytopenic purpura (TTP) an unlikely diagnosis in the case patient. Normal liver functions with an absence of jaundice and other tell-tale signs of chronic liver disease ruled out liver dysfunction and hypersplenism as possible etiologies of the patient’s thrombocytopenia. Finally, isolated thrombocytopenia with other normal cell lines in the absence of pseudo–Pelger-Huet anomaly (leukocytes with dumbbell-shaped bilobed nucleus, a reduced number of nuclear segments, and coarse clumping of the nuclear chromatin)18 and ring sideroblasts made a diagnosis of myelodysplasia very unlikely.

The rebound reduction in the case patient’s platelet count after an initial response to IVIG therapy prompted her physicians to administer new treatment regimens for immune thrombocytopenia: rituximab and romiplostim. Rituximab is a humanized anti-CD20 monoclonal antibody.19 Its use has been validated in the treatment of immune thrombocytopenic purpura (ITP), with an initial reported response rate of 40% to 54%.20 Irrespective of the initial favorable response, the effects were short-lasting. Only 20% of individuals had a sustained response to rituximab at the end of a 3-year period.20,21

Romiplostim is the first thrombopoietin receptor agonist to be approved in the United States for use in chronic refractory ITP. Thrombopoietin is an endogenous protein that stimulates the megakaryocytes to produce platelets at a faster pace, so the rate of production outpaces the rate of destruction in ITP.22 There are insufficient data on the safety and long-term efficacy of this drug in the elderly.23 Romiplostim has been associated with increased reticulin deposition in the bone marrow, and discontinuation of the drug may lead to a recurrence of thrombocytopenia.24

It is important to rule out TTP in all cases of thrombocytopenia associated with clopidogrel. According to the FDA MedWatch program, the incidence of clopidogrel-induced TTP was reported as 1 per 8500 to 26,000 treated patients.15,25 Even with treatment, TTP has a 10% to 20% higher mortality rate than isolated thrombocytopenia.26 Dose-related ADAMTS13 inhibitor activity has been proposed as the mechanism underlying clopidogrel-induced TTP, but no definitive cause/effect relationship has been established.27 Interestingly, Majhail and Lichtin25 reported that most cases of TTP and isolated thrombocytopenia occurred within the initial 2 weeks of exposure to clopidogrel. Both conditions responded well to early IVIG therapy and plasmapheresis, raising the suspicion that the same pathological process involves these two clinical entities with varying severity. Plasmapheresis is a process in which the fluid portion of the blood, “the plasma,” is separated from the cellular components. The plasma, which contains the antibodies, is discarded and the volume is replaced by albumin and crystalloids.

Despite the concerns about isolated thrombocytopenia and TTP with use of clopiodrel, as outlined by the CAPRIE (Clopidogrel versus Aspirin in Patients at Risk of Ischaemic Events)8 and CURE (Clopidogrel in Unstable Angina to Prevent Recurrent Events)28 trials, the benefits of clopidogrel use in a designated subset population outweigh the risks associated with the drug. It is prudent to rule out TTP in all cases of thrombocytopenia associated with clopidogrel; timely initiation of plasmapheresis decreases the mortality rate from 67% to 24% in TTP.25,29 All reported cases of isolated thrombocytopenia from clopidogrel were reversed using IVIG therapy or steroids without any fatal outcomes.

17. Ortel TL. Heparin-induced thrombocytopenia: when a low platelet count is a mandate for anticoagulation. Hematology Am Soc Hematol Educ Program. 2009:225-232.