To date, researchers have been unable to isolate the effects of a single factor or establish causality. So, what do we know about these multiple factors? Here is a summary of some important myths and facts about pediatric obesity.

Fact: Genetics is a nonremediable influence. Studies of twins indicate that genetics determines 50% to 80% of the tendency to gain weight,1 although other reports suggest a non-twin heritability of 5% to 40%. A minority of children have identifiable genetic causes of obesity, either syndromes or single gene mutations (Table). 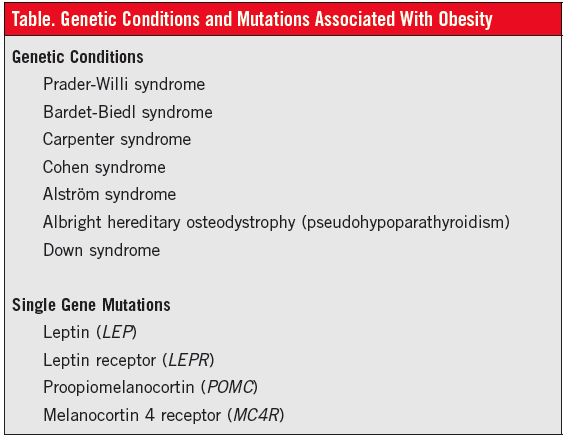 Full review of these conditions is beyond the scope of this article, but identification of these syndromes is important for guiding the general health care of children who are affected.

The theory of thrifty genes suggests certain genes provide an person (or a community) an advantage in energy storage during famine. While specific thrifty genes have not been identified, the concept of a thrifty genotype persists.

The drifty gene hypothesis proposes that as the number of human predators declined, obesity also declined as a significant factor in escaping predators. Obese people, who had been easier prey for predators, were able to reproduce and pass on their obese tendencies. This, along with genetic drift over 2 million years, may have transformed our population.2 Nevertheless, unless a specific genetic abnormality is identified, focusing on genetics simply doesn’t help most children with obesity.

Myth: A child’s obesity is all the parents’ fault.

Fact: Parental influences on childhood obesity occur in 3 distinct areas, only some of which are remediable: bequeathed genetics, epigenetic influences, and environmental habits in each home. Maternal and paternal obesity have been associated with increased childhood adiposity in birth cohorts dating to the 1950s.3 Recent studies suggest a greater maternal influence at birth and between 2 and 3 years of age.4 This suggests the potential for targeted intervention to women of childbearing age as a strategy for reducing childhood obesity.

Epigenetic studies show that preconception paternal obesity reduces the methylation of newborn insulinlike growth factor II, which is important in fetal growth and development; this reduction may be associated with increased risk for certain cancers (eg, colorectal cancer, ovarian cancer, Wilms tumor).5 Children who are small for gestational age or large for gestational age, which often reflects the intrauterine environment, are at increased risk for insulin resistance in the prepubertal period.6 This may reflect genetic, epigenetic, and environmental cross-influences.

Myth: Obesity only happens to poor children from certain ethnic or racial groups.

However, childhood obesity (and normal weight and underweight) crosses all lines—geographic, economic, ethnic/racial, and religious.

Fact: Hormones can cause weight gain, but they rarely are the etiology for childhood obesity. The most severe (and most rare) hormonal conditions linked with pediatric obesity are Cushing syndrome and Cushing disease, which are associated with vertical growth failure, hypertension, and elevated 11 pm salivary cortisol level.

Hypothyroidism can cause weight gain, but usually in the range of 5 to 10 kg. Many overweight children have subclinical hypothyroidism, with mildly elevated thyroid-stimulating hormone (TSH) levels and normal free thyroxine levels; this rarely progresses to overt hypothyroidism. Treatment with levothyroxine is not indicated when the following 3 conditions exist: TSH is 5 to 10 mIU/L, there is no goiter, and no thyroid antibodies are identified.7

While growth hormone deficiency is associated with higher body mass index (BMI) percentile, the identifiable abnormality on growth chart evaluation is low height velocity, not high weight velocity. Finally, insulin resistance and metabolic syndrome are associated with childhood obesity, but much like the chicken-and-egg riddle, the relationship between childhood obesity and insulin resistance is circular, each leading back to the other.

Myth:Fast food, skipping breakfast, and sugary drinks are to blame.

Fact: Nutrition and eating habits play a critical role in the development and persistence of childhood obesity. Children who eat 3 or more small meals/snacks a day, including breakfast every day, are 2 times less likely to become obese or overweight.8

Portion size has increased in almost all packaged and quick-order foods; increased portion size is associated with increased bite size and amount eaten.9 There is evidence of an environment-gene effect with sugar-sweetened beverages, in which people with high-risk genes are more affected by sugary drinks.10 Supporting this evidence are studies such as those published by de Ruyter et al11 and Ebbeling et al12 showing that a reduction in consumption of sweetened drinks significantly reduced weight gain and fat accumulation in children of normal weight and led to modest BMI percentile changes in overweight and obese children for the first year (but not the second year) of intervention. These studies give an optimistic professional the opportunity to educate the child and the family, potentially altering a child’s course of weight gain.

Myth:Children do not get enough physical activity. Blame obesity on the computer game industry.

Fact: Physical inactivity and sedentary behavior play a role in caloric balance. When data were analyzed from a group of 7- to 11-year-old Canadian children who participated in the 1994 National Longitudinal Survey of Children and Youth, organized and unorganized sports/physical activity were negatively associated with being overweight or obese (10% to 24% reduced risk for overweight; 23% to 43% reduced risk for obesity).13 Conversely, television watching and video game use increased the risk for being overweight or obese (17% to 44% increased risk for overweight; 10% to 61% increased risk for obesity). This corresponds with U.S. data from the Third National Health and Nutrition Examination Survey (NHANES), in which 8- to 16-year-old children who watched 4 or more hours of television each day had greater body fat (P < .001) and a greater BMI (P < .001) than those who watched less than 2 hours each day.14

Therefore, increasing physical activity and decreasing sedentary activity both can have a positive effect on prevention and treatment of childhood obesity.

Myth:The advertising and marketing directed to children does not contribute to the problem.

Fact:The International Association for the Study of Obesity15 and the World Health Organization16 both have issued reports calling for restriction and regulation of marketing directed to children. Marketing food to children makes fiscal sense to food manufacturers; that fact implicates marketing as a likely component in the drastic increase in consumption of unhealthful food worldwide. Understanding the influence that marketing has on children’s food choices can enable family counseling to provide counterinfluences.

15. Persson M, Soroko R, Musicus A, Lobstein T. A Junk-Free Childhood: The 2012 Report of the StanMark Project on Standards for Marketing Food and Beverages to Children in Europe. London: International Association for the Study of Obesity; 2012. http://www.iaso.org/site_media/uploads/A_Junk-free_Childhood_2012.pdf. Accessed October 3, 2013.

Dr Moltz is director of pediatric diabetes services at Children’s Hospital of Michigan and an assistant professor of pediatrics at Wayne State University School of Medicine in Detroit.