A 14-year-old boy presented after an episode of syncope, his fourth in the past 5 years. During the first syncopal episode, he had fallen off a swing on a hot day. During the second episode, he had been working outside, then had walked into the house, tripped on a carpet, and lost consciousness. The third time, he had passed out in church.

Leading up to the current admission, he had been stacking hay onto a truck and had passed out, requiring cardiopulmonary resuscitation (CPR), before being transferred to our facility. During each of these syncopal episodes, he recovered consciousness spontaneously after 1 to 2 minutes. 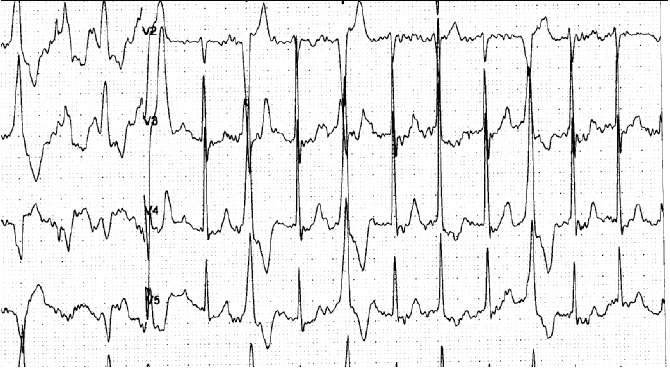 On presentation, his heart rate was in the 30s, but he was asymptomatic. Results of a complete blood count, a comprehensive metabolic panel, a thyroid panel, and electroencephalography were all normal. Electrocardiography (ECG) showed a sinus bradycardia of 57 beats per minute, with a PR interval of 160 msec and QT interval of 440 msec. Results of echocardiography and computed tomography angiography of the chest and coronary arteries were normal.

Based on these findings, the diagnosis of familial catecholaminergic polymorphic ventricular tachycardia (CPVT) was made.

CPVT is a clearly defined but insufficiently recognized entity, despite that its first published description was in 1975. It presents as syncope triggered by exercise, physical effort, or emotion. The mean age at which the first syncope occurs is between 7 and 9 years.1 The cardiac ryanotidine receptor 2 (RYR2) gene and the cardiac calsequestrin 2 (CASQ2) gene are responsible for autosomal dominant or recessive inheritance, respectively.2

Consciousness is regained after seconds or minutes, leading to the potential misdiagnosis of epilepsy. Patients rarely complain of shortness of breath, pain, or palpitations. Physical examination findings are always normal. ECG shows bradycardia, but thyroid hormone levels and plasma concentrations of epinephrine and norepinephrine, as well as results of chest radiography, echocardiography, cardiac catheterization, and angiography, are all normal. The diagnosis is made by cardiac stress testing.

First-line treatment is with β-blockers with no sympathomimetic activity, such as nadalol; flecainide is a second-line choice. Left cardiac sympathetic denervation is the surgical option when medical treatment fails. This unilateral sympathectomy is antifibrillatory and involves the surgical resection of thoracic sympathetic ganglia at T2, T3, and T4, and the lower half of the left stellate ganglion (T1).

Our patient was started on nadalol, which was gradually increased to  a dosage of 2 mg/kg/day, but he continued to have nonsustained ventricular tachycardia with exercise. Therapeutic dosing of flecainide was added to the regimen, which eliminated the ventricular tachycardia. Genetic test results returned positive for RYR2 mutation, confirming the CPVT diagnosis. The boy’s family members also were undergoing testing for CPVT. His home now has an automated external defibrillator, and family members are trained in CPR.