Calcified Cephalohematoma in a Newborn: Unusual Presentation Without History of Birth Trauma

A 4-month-old boy presented with a 2.5 × 6.0-cm bony mass in the left parietal region. He had been delivered vaginally at 39 weeks of gestation to a 22-year-old primigravida, with no labor complications and no use of assistive instruments. His birth weight was 3.4 kg, and his Apgar score was 8 at 1 minute and 9 at 5 minutes. No pregnancy complications had been noted during prenatal visits.

At 5 days of life, he had presented with hyperbilirubinemia (21 mg/dL), which had been increasing since birth (14, 15, and 18 mg/dL). At that time, evidence of a cephalohematoma was noted. The newborn’s hyperbilirubinemia, which was consistent with the lysis of extravascular erythrocytes at the site of the cephalohematoma,1 improved with phototherapy. The patient was put on observation for 24 hours, and then sent home with routine follow-up.

At 3 months of age, the boy was brought to the physician’s attention because of persisting cephalohematoma, which felt hard to palpation. Skull radiography and intracranial ultrasonography of the anterior fontanel were performed. The results were consistent with a prominent calcified type 1 cephalohematoma with a slight rarefaction of the calvaria, fluid under the calcified periosteum, and no acute fracture (Figures A-E). 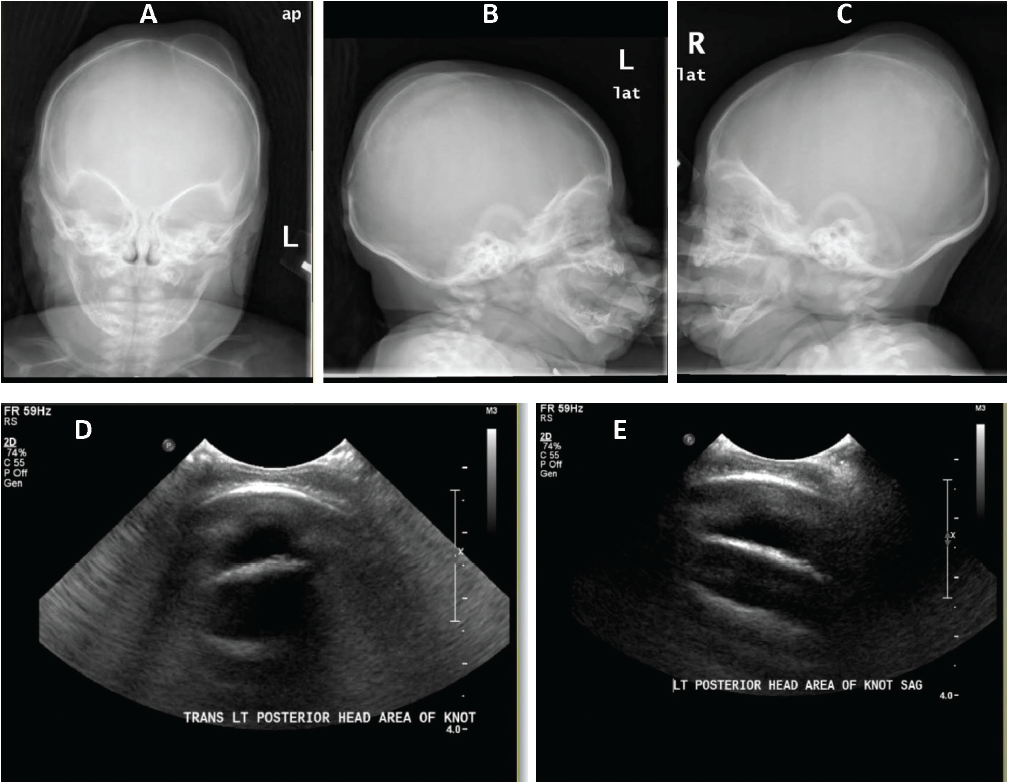 A, B, and C are radiographs showing a prominent nonacute calcific masselevating the left parietal cortex. No fracture is evident, but there is a slight rarefaction of the calvaria under the cephalohematoma. D and E are intracranial ultrasonograms performed via the anterior fontanel and showing a mass with an echogenic calcific rim, consistent with the radiographic appearance of left parietal cephalohematoma.

Cephalohematoma is one of the most common head injuries associated with assisted vaginal delivery, especially in the case of hard labor that makes necessary the use of instruments such as forceps or vacuum.2,3 It occurs in 0.4% to 3.0% of neonates.4 It is believed that repeated compression of the skull during hard labor damages the emissary and diploic veins, ultimately resulting in a hematoma in the subperiosteal layer of the skull.5 The majority of cephalohematomas resolve spontaneously within 1 month.4

Although they are not usually present at birth, cephalohematomas grow within hours or sometimes days after birth, because the bleeding occurs slowly. Hyperbilirubinemia can appear 48 to 72 hours following the extravasation of blood due to the shortened lifespan of extravascular red blood cells.1

When a cephalohematoma persists for more than 4 weeks, a rare calcification process may begin (3%-5% of all cephalohematomas), resulting in complications such as persistent deformity of the head6 and/or encroachment into the cranial vault space that may require surgical intervention.7 Calcified cephalohematomas generally are classified as 2 types: Type 1 presents with a nondepressed inner lamella without encroachment into the cranial vault space, and type 2 is characterized by a depression in the inner lamella that invades the vault space.

Most cephalohematomas spontaneously resorb in approximately 30 days. When a cephalohematoma fails to resorb, progressive subpericranial osteogenesis is induced, ultimately leading to calcification.7 If it is large, the swelling can depress the pliable neonatal skull, causing encroachment into the cranial vault space. In addition to cosmetic issues, reported complications of persistent cephalohematomas include infections, osteomyelitis, and craniosynostosis. Skull fractures may be associated with cephalohematoma in up to 18% of cases.8

Even though the patient in the case reported here presented with typical signs of cephalohematoma, to our knowledge, this case is unique due to the lack of delivery-related trauma and of any development or neurologic abnormality. Previously described cephalohematomas in neonates without hard labor were associated with head compression in utero; however, these cases had been diagnosed prenatally via ultrasonography.9,10 We believe our case is unique in that the patient presented without labor-associated trauma and without evidence of in utero head compression, since prenatal ultrasonography showed normal head development and shape.

No consensus exists on the best management options for calcified cephalohematomas. Accordingly, indications for surgical treatment have not been completely defined. It is generally accepted that persistent disfiguring calcified cephalohematoma and involvement of the cranial vault space require surgical reduction, which is not indicated earlier than at the fourth month of age, and it offers a limited number of options.

For type 1 lesions, a simple excision followed by burning of the outer lamella is performed, with the inner lamella left intact. For type 2 lesions, a flip-over “bull’s-eye” or cap radial craniectomy are the techniques of choice. While the flip-over bull’s-eye technique is simpler and results in a strong reconstruction, cap radial craniectomy is more versatile and can be performed even in severely deformed skulls, but it is more time-consuming and often is weaker than the bull’s-eye technique.

It is important to note that there is no evidence of brain damage occurring secondary to a calcified cephalohematoma.7 Due to the low prevalence of persistent cephalohematomas and the tendency to opt for surgical interventions before the first year of age, the risk of possible long-term focal neurologic deficits might simply have been underestimated.

The best management of uncomplicated cephalohematomas, as in our case, is conservative with a wait-and-watch strategy. The risk-to-benefit balance for different direct interventions generally is difficult to establish, thus each case should be evaluated carefully. Complicated or persistent calcified cephalohematomas generally require intervention. It is believed that the dramatic asymmetry of the skull can be surgically corrected without increasing the risk for craniosynostosis.7

Petersen and colleagues11 showed that a passive molding-helmet therapy is effective in remodeling and normalizing head shape in infants younger than 9 months who have limited to partially calcified cephalohematomas, whereas there is no evidence of efficacy for fully calcified lesions. Another limitation to the use of molding helmets is that, while they are effective in reshaping the skull, the compression might push the inner lamella of the cephalohematoma into the cranial vault, facilitating type 1 to type 2 conversion, which might have unknown effects on the brain.

Given the limited literature on this scenario and the still incomplete knowledge of this condition, in our case follow-up without intervention was the option of choice, based on the following considerations. The calcification was present but of minimal significance, and no involvement of the cranial vault was evidenced. In addition, the presence of a fluid-like density area might suggest the possibility of spontaneous resorption. On the other hand, aspiration of the fluid was not an option due to the calcification and the additional risk of infection. Surgery might be considered after 6 month if there are no signs of improvement, since surgery is associated with a risk of infection and of poor cosmetic outcome.7

Of note, our choice of observation without active intervention is supported by reports of spontaneous resolution of calcified lesions. Daglioglu and colleagues12 reported 2 cases of calcified cephalohematomas developing after assisted vaginal deliveries, one in a 6-week-old and another in a 7-week-old. The newborns’ cases were followed up closely without intervention. During the following 12 months, the lesions regressed and resolved completely, with imaging confirming the presence of no cranial abnormalities.

We believe the role of primary care professionals is critical. First, they should reassure the parents, who experience anxiety as the signs of cephalohematomas become evident, that the condition usually is benign and resolves spontaneously without consequences. Additionally, since complications are rare but can be severe, primary care physicians should promptly recognize cephalohematomas and refer any case with suspected complications to hospital pediatric services for management.

On the other hand, it is important to highlight that uncomplicated lesions can be managed safely by primary care physicians, provided that close observation is maintained to promptly identify focal neurologic deficits, developmental anomalies, infections, skull fractures, and coagulopathies. This would reduce the costs of care for this rare pathology while presenting no additional risk to patients.

Due to the minimal extent of calcification, the lack of infection, and the lack of cranial space encroachment, and considering the age of the patient and that his physical and neurologic development were completely normal, close observation without direct intervention was thought to be the best option. At 4 months of age, when this report was written, the patient was seen at a follow-up visit. No evident signs of resolution or complications were seen.

Because the rarity of this condition makes it difficult to build solid evidence-based treatment guidelines, we encourage physicians to systematically report similar cases, thus helping in better defining the risks, the prognosis, and the treatment of choice of atypically presenting cephalohematomas.

Bhargavi B. Kola, MD, is the assistant medical director and an assistant professor in the Department of Pediatrics at the School of Medicine at Texas Tech University Health Sciences Center at the Permian Basin in Odessa, Texas.

Vivekananda Dasari, MD, is a pediatrician at the Texas Tech University Health Sciences Center at the Permian Basin in Odessa, Texas.