A 56-year-old man who con­sumed moderate amounts of alcohol was awakened by an intense burning pain in the right great toe; local erythema and edema were also present. Within hours, the pain became excruciating, and the same symptoms developed in the left great toe. Acetaminophen provided no relief. 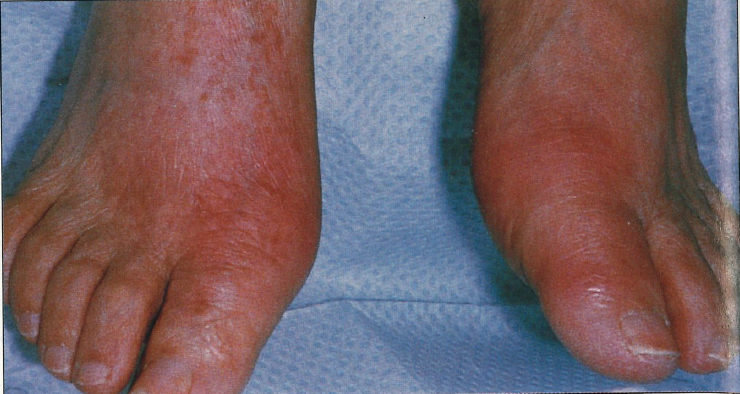 The patient's serum uric acid level was 8.8 mg/dL. Acute gouty arthritis of the first metatarsophalangeal joints, or podagra, was diagnosed.

Drs Demetrios Papaioannides and P. Economidis of Arta, Greece, and N. Akritidis, of Ioannina, Greece, write that gout has a predilection for the first metatarsophalangeal joints; as many as 50% to 7(J% of first attacks occur in the big toe.1 Other frequently involved joints include ankles, knees, wrists, elbows, and joints of the feet and hands. Shoulders; hips; and spinal, sternoclavicular, and sacroiliac joints are rarely involved.

Between 3% and 14% of patients experience initial attacks of polyarticu­lar disease,2 which is more common in elderly women and in patients with as­sociated myeloproliferative disorders or in those who use cyclosporine.

The peak age of onset is between the fourth and sixth decades of life; in women, the initial episode often oc­curs at age 70 years or older.1 When patients younger than 30 present with gouty arthritis, consider a specific en­zyme defect, underlying renal disease, or a drug or toxic agent (such as eth­anol or lead) as the possible cause.

Attacks occur suddenly, often late at night or early in the morning. Brief twinges of pain in the affected joint may presage an attack. Patients describe very severe pain associated with swelling, extreme tenderness, and redness overlying the joint. Cel­lulitis or accompanying tenosynovitis may develop. Anorexia, malaise, and low-grade fever can occur. Without intervention, these episodes usually subside within 5 to 7 days.

Acute gout also can occur in bursae; gout is a common cause of acute inflammatory olecranon bursi­tis. Multiple attacks may be more frequent with polyarticular involvement. Chronic inflammation with su­perimposed acute exacerbations can progress to a crippling arthritis.

The definitive method for diag­nosis of gouty arthritis is joint aspiration and demonstration by polarizing microscopy of characteristic needle-­ shaped, negatively birefringent mono­ sodium urate crystals. To eliminate an infectious cause, obtain Gram stains and cultures of all fluid. Normal levels of serum uric acid do not rule out gout.

Traditional therapies for acute gout include colchicine, NSAIDs, and corticosteroids. The response to colchicine is usually dramatic; typical­ly, joint pains begin to ease after 12 hours of treatment and stop within 36 to 48 hours. Oral colchicine, 1 mg q2h, is given until a response is ob­tained or diarrhea or vomiting occur.

NSAIDs also are effective; they have replaced colchicine as the most commonly used drugs to treat acute gout. Corticosteroids (eg, prednisone, 20 to 40 mg/d for 3 days with subse­quent rapid taper) can be effective and may be particularly useful for patients in whom NSAIDs and colchicine are contraindicated. Local corticosteroid injection is an additional option. Rest and splinting of the affected joint may be helpful adjuncts to drug therapy.

This patient was given indo­methacin. After 5 days of treatment, all symptoms and inflammatory changes had subsided.