Acute Dx: What is the Cause of Sudden Illness?

A 48-year-old African American male with no past medical history noted a hyperpigmented lesion under his right middle fingernail and another one to his right index proximal interphalangeal joint 7 months ago. He did not seek medical attention for these lesions.

He then noted a mass in his right armpit 1 month ago, associated with burning pain and feeling of fullness in right armpit. He complained of constant low energy and easy tiredness.

Due to the persistent and worsening nature of his symptoms he decided to seek medical attention. He denied numbness or weakness in his right upper extremity, chest or abdominal pain, fever, vomiting, or weight loss.

The patient has lived in the Midwest all of his life and worked in a store stocking shelves. He denied prior exposure to chemicals or a recent finger injury. He never smoked or used street drugs and drinks alcohol occasionally and in moderation. His family history is significant for breast cancer in 1 of his sisters. He had no pets. 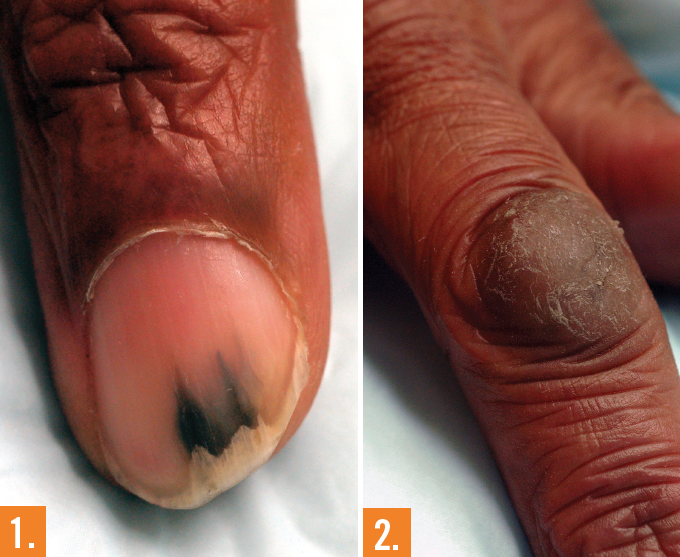 The patient appeared alert and in no distress. His vitals included a blood pressure of 120/67 mm Hg, a pulse of 62 beats per minute, oral temperature of 97.9°F (36.1°C), and weight of 69 kg. There was no scleral icterus or pallor, electro-ocular movements were intact, and oropharyngeal mucosa was normal in appearance.

There was a firm, nontender, 4 cm to 5 cm right axillary nodal conglomerate. Shotty nontender inguinal nodes were present bilaterally. A 6 mm to 7 mm irregularly pigmented nontender lesion was noted under the mid portion of the nail of the right middle finger (Figure 1); the nail showed irregular thickening over the lesion and no periungual extension of pigmentation was present. The right 1st finger demonstrated a prominent callus over the metacarpophalangeal joint (Figure 2) and slight erythema of the dorsum of the finger. There were no cutaneous lesions on his palms or soles.

A complete blood count showed a normal white blood count and differential, a mild anemia, and a normal platelet count. The patient’s electrolytes, blood urea nitrogen, creatinine, and blood glucose levels were normal. He was given an urgent dermatology referral where a biopsy of the subungual lesion was performed.

A. Malignant melanoma with metastasis to lymph nodes

Answer: Malignant melanoma with metastasis to the lymph nodes

The biopsy of the patient’s subungual lesion was identified as a malignant melanoma and a subsequent positron emission tomography scan was performed that demonstrated hypermetabolic right axillary adenopathy consistent with regional metastases.

Melanoma is a deadly form of skin cancer. Our patient had malignant melanoma under his nail bed, which is an unusual location but is more common in African Americans.1,2 Overall malignant melanoma is unusual in dark-skinned individuals with an incidence up to 15 times lower than in Caucasians. A high index of suspicion is required when a new, changing, enlarging, or otherwise unusual pigmented lesion is discovered in any population.2 This is due to the fact that the prognosis worsens dramatically with deeply penetrating or metastatic lesions.

About 3% of all melanomas are subungal in Caucasians versus 20% in non-Caucasian populations. The great toe and thumbnail bed are the most commonly involved making our patient’s case with involvement of the middle finger rather atypical. The prognosis of subungual melanoma depends on the disease stage at the time of the diagnosis. Nail bed melanomas have a worse prognosis than melanomas arising from other areas of the skin.3

Subungual lesions discovered during exam may represent local skin pathology or manifestations of systemic disease.1 History and careful examination, followed by appropriate tests usually establish a diagnosis. Trauma to fingertip can cause a painful subungual hematoma, while local bacterial or fungal infection can result in paronychia, which can be acute or chronic.

It is important to distinguish a discolored nail from a discolored nail bed. Systemic infections such as endocarditis, renal failure, coagulopathy, and certain poisonings all cause nail bed changes usually not presenting as an isolated symptom. Tumors of the nail bed can be malignant (as in our case) or benign (eg, painful glomus tumor, subungual exostosis). Discolored nails are caused by onychomycosis, lichen planus, psoriasis, certain medications (eg, minocycline), or application of dye either intentionally or as a result of one’s occupation.1

Our patient underwent a metastatic work-up and appeared to only have metastasis in the ipsilateral axillary lymph nodes that were bulky, meaning that he likely has stage IIIc disease. Right axillary lymph nodes were then excised along with the subungual tumor and the wounds are finally healing after some local postoperative complications. He was started on immunotherapy with interferon. His 5-year survival is calculated at 40%. n