Michelle Legacy, DO, and Eric Seiger, DO
Skin and Vein Center, Fenton, MI

ABSTRACT
Acrodermatitis enteropathica (AE) is a rare autosomal recessive inherited form of zinc deficiency caused by a mutation of the SLC39A4 gene, which encodes the zinc/iron-regulated, transporter-like protein, which is located on chromosome 8q24.3. AE presents during infancy with the classic clinical triad of acral dermatitis, alopecia, and diarrhea. The cutaneous manifestations of AE typically occur within 1 to 2 weeks upon weaning the child from breast milk; however this may vary based upon the etiology. Here is an atypical case of delayed onset AE in a 3-year-old Caucasian girl.

A 3-year-old Caucasian girl presented to our clinic with an 18-month history of a widespread, pruritic rash that had failed numerous topical therapies in the past, including triamcinolone, ketoconazole, nystatin, mupirocin, and tacrolimus. She was also treated with oral prednisone and multiple courses of oral antibiotics, including clindamycin, cephalexin, and amoxicillin, for her numerous soft tissue infections.

The grandmother reported occasional improvement with oral antibiotic therapy, but the rash would never completely resolve and exacerbations were frequent. Her past medical history included failure to thrive, patent ductus arteriosus, and an atrial septal defect.

Unfortunately, the patient was conceived by rape and there is an exceedingly high possibility of consanguinity, which may elucidate causality in the syndromic features (listed under physical exam) and cardiac abnormalities present.

Physical Examination. On physical exam, numerous erythematous, annular to serpiginous plaques with peripheral scale, some with a double-edged scale, were noted on the neck, trunk, and the upper and lower extremities (Figure 1) bilaterally. Erythematous acral (Figure 2) and perioral patches with desquamation (Figure 3) were also present, as well as dry, brittle, sparse hair (Figure 4). No teeth or nail abnormalities were observed, but syndromic features including hypertelorism and epicanthal folds were present.

Musculoskeletal exam revealed an inability to stand without support, a resting tremor, and the patient was below the 5th percentile for both height and weight. 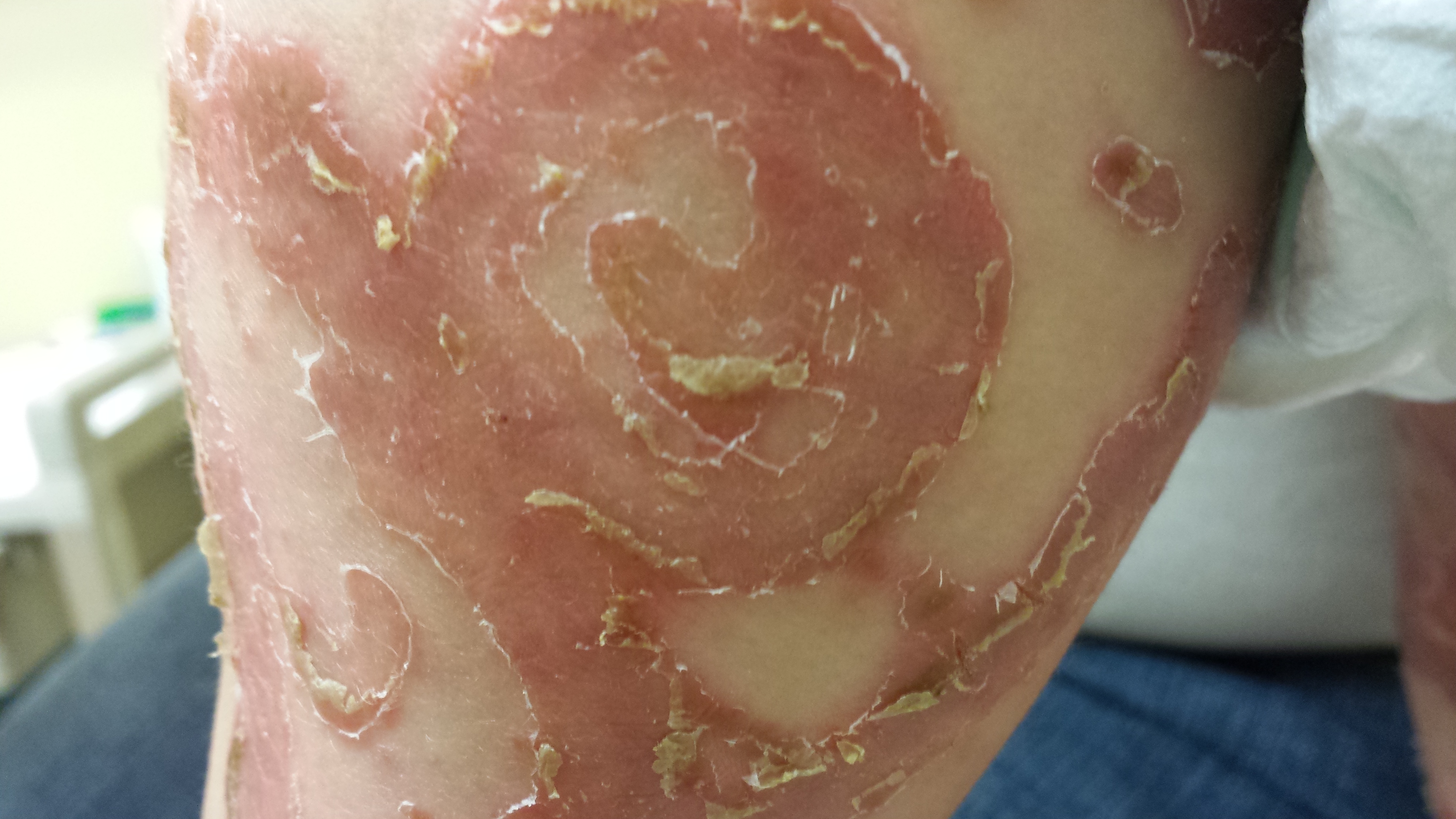 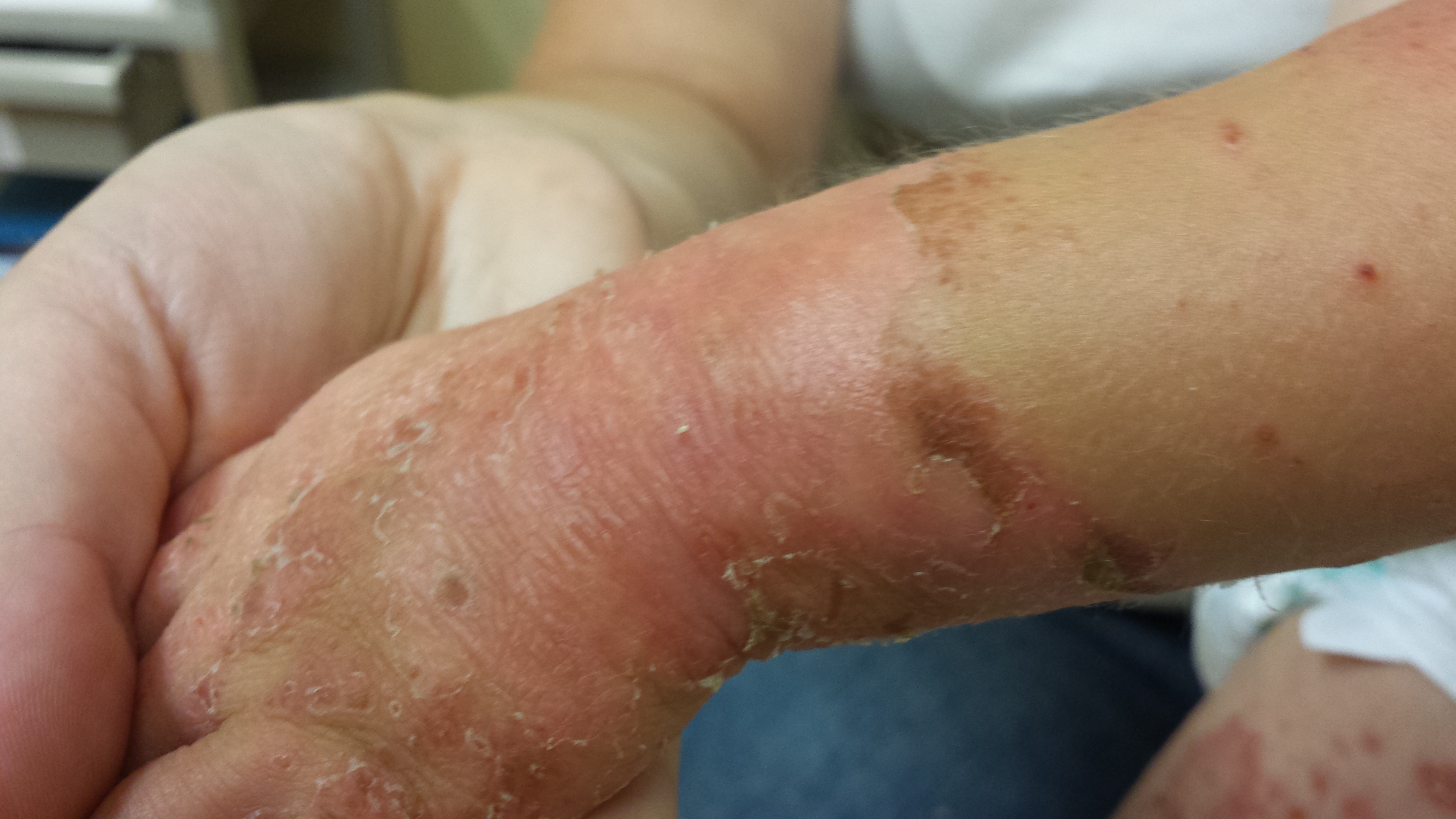 Figure 2. Erythematous patch with desquamation and scale on the right dorsal wrist. 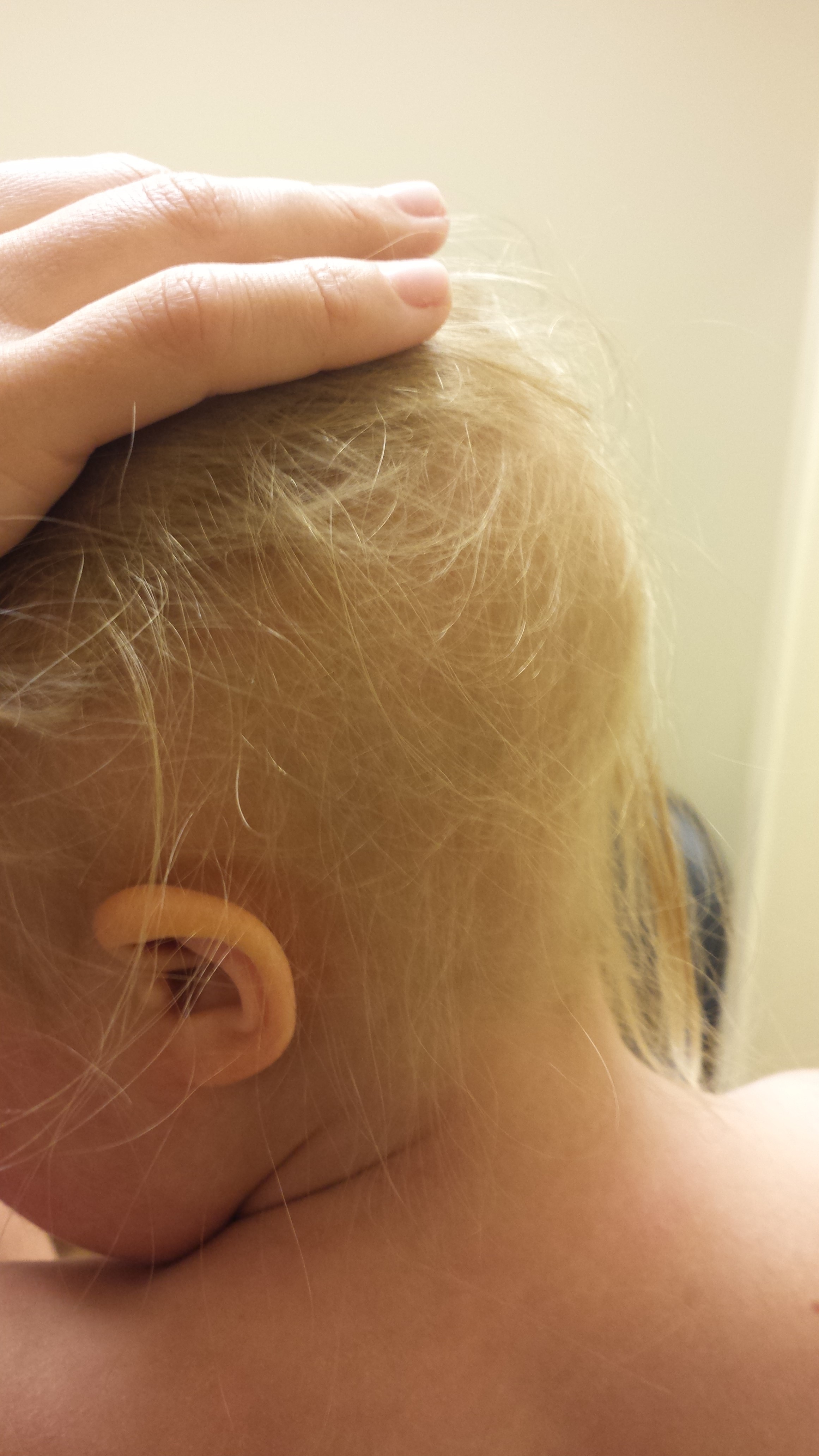 Histology and Laboratory Testing. A 4 mm punch biopsy obtained from a plaque on the abdomen showed psoriasiform dermatitis with parakeratosis and a mild perivascular infiltrate of
lymphocytes and histiocytes in the dermis, consistent with seborrheic dermatitis or psoriasis. A repeat 4 mm punch biopsy taken from a plaque on the left lower extremity revealed a mixed spongiotic and focal interface dermatitis consistent with a hypersensitivity reaction.

A trichogram using hair obtained from the scalp and lateral eyebrows was negative for hair shaft abnormalities. Genetic testing for a SPINK5 gene mutation, associated with Netherton’s syndrome, was negative.

Treatment. Upon discovering the depleted serum zinc levels, the patient was started on 30 mg/day of elemental zinc. Rapid resolution of the skin rash (Figure 5) as well as weight gain and improvement in motor skills and mentation occurred. Two months after initiating therapy, the serum zinc increased to 67 mcg/dL and the alkaline phosphatase was 90 U/L. The patient’s resting tremor had also resolved, and she was now able to stand without support. 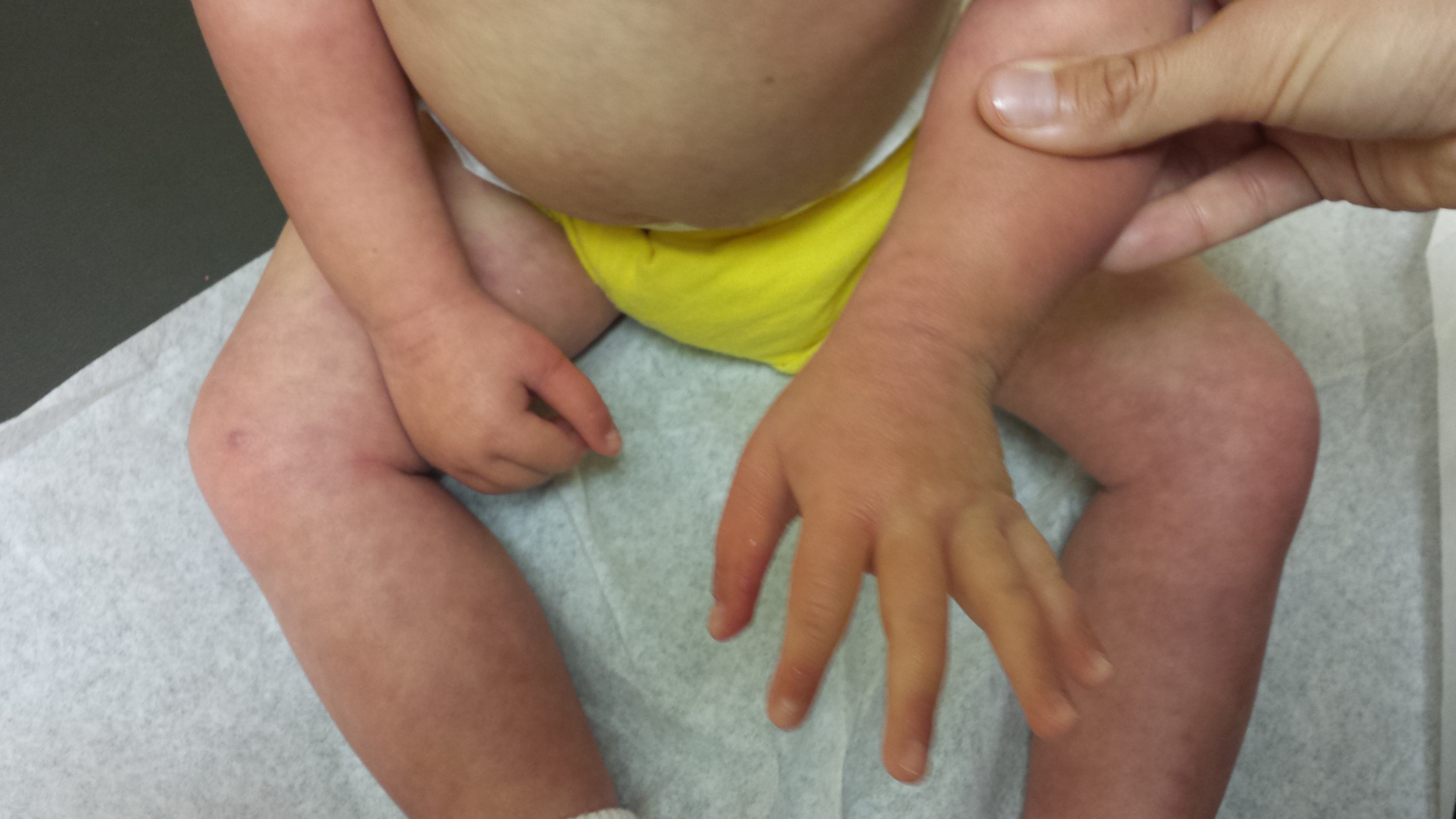 Figure 5. Near complete resolution of skin eruption after initiation of zinc therapy at 2-week follow-up.

At 8 months of oral zinc replacement at 30 mg/day, the patient’s zinc and alkaline phosphatase have been maintained within the normal range, and the patient had achieved significant weight gain with the ability to swallow solid foods.

Discussion. Zinc is an essential trace element and plays a vital role in cell proliferation, healing and tissue repair. This is accomplished through the stabilization of cell membranes by reducing free radical production and the prevention of lipid peroxidation. Zinc is also important in protein, carbohydrate, and vitamin metabolism, as well as growth and development. Furthermore, the immune system is reliant on zinc for proper function, and it plays a major role in fertility and conception.1 Zinc deficiency has both acquired and inherited forms, both presenting with very similar clinical features varying in severity based on the degree of zinc depletion.

Acrodermatitis enteropathica (AE) is a rare, autosomal recessive, inherited form of zinc deficiency. It is caused by a mutation of the SLC39A4 gene, which encodes the zinc/iron-regulated transporter-like protein transporter, located on chromosome 8q24.3.2 This gene is predominately expressed in the duodenum and jejunum, which are the principal sites of zinc absorption. The estimated incidence of AE is 1 per 500,000 children, and shows no predilection for race or sex.2

Presentation. AE presents during infancy with the classic clinical triad of acral dermatitis, alopecia, and diarrhea; the complete triad is seen in approximately 20% of patients.1 The cutaneous manifestations of AE typically occur within 1 to 2 weeks upon weaning from breast milk to formula or cereal as these forms of nutrition have lower zinc bioavailability than breast milk. AE may present in exclusively breast-fed infants as well, but will affect mostly premature children.1 Preterm infants or debilitated patients who are put on prolonged parenteral alimentation deficient in zinc are also at risk.3,4

The initial expression of the disease includes erosive perioral dermatitis with perleche, followed by progression of the dermatitis to involve the face, acral surfaces, and diaper region. Palmar erythema, sometimes with annular scale, may also be present.

The predominant extracutaneous feature is diarrhea. Unfortunately, it is the also the most variable, and can be intermittent or totally absent. Decreased zinc absorption from the diarrhea may further aggravate the condition, leading to a vicious cycle.5 Other extracutaneous features include growth retardation, anemia, hypogonadism, delayed puberty, and neuropsychological disturbances including altered mental status and anorexia.5

Patients with AE frequently have compromised immune function leading to persistent cutaneous infections including conjunctivitis, blepharitis, candidiasis, and paronychia. These features may be evident even in the absence of the classical cutaneous manifestations.5

Photosensitivity is also a frequent association. Therefore, any baby presenting with periorificial erosive dermatitis along with alopecia, diarrhea and/or photosensitivity, should be considered for zinc deficiency.5

Diagnosis. The determination of a low plasma zinc level is diagnostic. Normal plasma zinc level is 70 µg/dL to 250 µg/dL; many patients have plasma levels ≤50 µg/dL.6 Serum alkaline phosphatase is a zinc dependent enzyme and may serve as surrogate marker of hypozincemia.

In certain cases where zinc studies are ambiguous, histopathology may be of diagnostic help. Note: These findings are not diagnostic and are shared with other nutritional deficiencies. Histopathology characteristics of AE include necrolysis with subsequent confluent necrosis of keratinocytes in the upper spinous layer. The affected keratinocytes often have pyknotic nuclei. Confluent parakeratosis with associated hypogranulosis and dermal edema may be present. Subcorneal vesicle formation in the pale areas is also observed. Associated neutrophilic crust is a variable finding. Scattered dyskeratotic keratinocytes are often present within all levels of the epidermis. Late lesions can mimic psoriasis,7 which is consistent with our initial biopsy.

Treatment. Treatment of the hereditary form of AE is lifelong and is initiated at 3 mg/kg/day of elemental zinc.2 The dose is then adjusted as requirements will vary from patient to patient. The duration of therapy for acquired forms of AE will vary based on etiology and degree of depletion.2

Rapid resolution of the diarrhea typically occurs within 24 hours, and marked improvement of the skin lesions should be noted just days after initiating zinc supplementation. Zinc deficiency is very unlikely, and other diagnoses should be considered, if the patient fails to respond to zinc replacement within a few days and the alkaline phosphatase level remains stable. Serum zinc and alkaline phosphatase levels should be monitored every 3 to 6 months and the dose of the zinc should be adjusted accordingly.8,9 Care should be taken to avoid excessive supplementation of zinc as this can deplete copper levels in the blood and, in extreme cases, can cause multisystem organ failure. Side effects of zinc replacement can include but are not limited to nausea, vomiting, and gastric hemorrhage.6

AE is a rare disease but it is critically important to recognize the cutaneous manifestations of zinc deficiency as long-term sequelae are unnecessary and preventable. As serum zinc levels may provide information that is misleading and not consistent with actual levels of the element in affected patients, is it important to base your diagnosis and treatment on the clinical presentation and therapeutic response to zinc supplementation. In patients with zinc deficiency who experience recurrence after the cessation of zinc therapy, testing to confirm the SLC39A4 gene mutation should be performed. It is also important to mention that recent shortages of injectable zinc used for parenteral alimentation have led to increased reports of AE-like eruptions and will likely continue until the periodic shortages are resolved.

Michael Centilli, DO, is the chief dermatology resident at Botsford Hospital in Farmington Hills, MI.

Michelle Legacy, DO, is a dermatologist at the Skin and Vein Center in Fenton, MI.

Eric Seiger, DO, is a dermatologist and cosmetic surgeon at the Skin and Vein Center in Fenton, MI.