ABSTRACT: Acetaminophen is the most commonly used pain medication in the United States, and its ubiquity results in its being one of the most frequently implicated drugs in childhood poisonings. This article reviews the pathophysiology of acetaminophen metabolism, the clinical and diagnostic clues of an acute overdose, differential diagnoses, and management approaches including the use of the antidote, N-acetylcysteine (NAC), for acute acetaminophen overdose and toxicity in pediatric patients.

Acetaminophen is the most commonly used analgesic–antipyretic medication given to children in the United States and worldwide. In 2005 alone, U.S. consumers purchased more than 28 billion doses of products containing acetaminophen.1 The increased use of acetaminophen since the 1960s stems from the association of aspirin-containing medications with the occurrence of Reye syndrome in children. Today, acetaminophen (chemical name N-acetyl-p-aminophenol, or APAP; known as paracetamol in most countries outside of the United States and Canada) is readily accessible and is an ingredient in more than 200 over-the-counter and prescription medications, either as a single agent or in combination with other pharmaceuticals.

Many formulations with different concentrations of acetaminophen are available, including liquid suspensions, tablets, capsules, and rectal suppositories with a paraffin base. Brand names of some acetaminophen-based medications are Tylenol, Panadol, Māpap, FeverAll, and Tempra. In November 2010, the U.S. Food and Drug Administration (FDA) approved an intravenous preparation of acetaminophen (trade name Ofirmev) for inpatient use in children older than 2 years of age.2

Despite its excellent safety profile when properly dispensed, acetaminophen is cited as one of the drugs that is most often ingested in childhood poisonings.3 A single acute overdose can be life threatening due to the risk of acetaminophen-induced hepatotoxicity, potentially leading to liver failure and death.

This review article discusses the pathophysiology of acetaminophen metabolism, the clinical and diagnostic clues of an acute overdose, differential diagnoses, and management approaches for pediatric patients. Acetaminophen-induced hepatotoxicity due to chronic overdose (also known as repeated supratherapeutic acetaminophen ingestion) is not discussed.

Standard therapeutic oral doses of acetaminophen are rapidly absorbed from the gastrointestinal tract, primarily in the small intestine. Peak serum concentrations are achieved at about 2 hours postingestion. When an acute overdose occurs, the peak serum concentration increases to 4 hours for immediate-release preparations. The presence of a coingestant that delays gastric emptying, or an overdose with an extended-release formulation of acetaminophen, further increases this time.

After ingestion, 90% to 95% of acetaminophen metabolism takes place in the liver (Figure 1). The kidneys excrete the water-soluble byproducts of this hepatic metabolism, and a small amount (about 2%) is urinated as unchanged acetaminophen. The primary metabolic pathways occurring in hepatic tissue are sulfation, which predominates in children younger than 12 years old, and glucuronidation, which prevails in adolescents and adults. Four percent of the remaining acetaminophen dose is biotransformed by the hepatic cytochrome P-450 system. This biotransformation creates a reactive, highly toxic metabolite called N-acetyl-p-benzoquinone imine (NAPQI). Glutathione, present in the hepatic tissue, binds to NAPQI and produces a nontoxic byproduct that subsequently is excreted by the kidneys. An acute acetaminophen overdose depletes hepatic glutathione stores by 70% to 80%; hence, not all NAPQI can be metabolized. Buildup of this toxic metabolite causes hepatic injury by binding covalently to the lipid bilayer of hepatocytes. Hepatic centrilobular necrosis occurs. 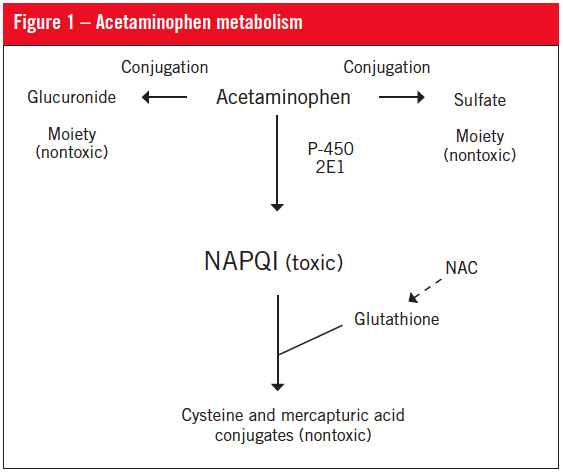 Acetaminophen overdose can occur at any age. The patient’s age helps clarify the cause of the ingestion. Improper dosing of a patient younger than 1 year of age is termed a therapeutic misadventure, indicating that the infant’s caregiver administered an incorrect dosage. Accidental or unintentional poisonings occur in toddlers and young children who can access toxic substances and/or medications in an unsupervised environment. Teenagers and adults may ingest toxic amounts of acetaminophen to self-harm as a cry for help.5-7

The recommended weight-based single dose of oral acetaminophen is 10 to 15 mg/kg every 4 to 6 hours, with no more than 5 doses per 24-hour period. These guidelines apply to most children under 12 years of age. If the child weighs 50 kg or more, an adult dosage regimen is used. With the use of acetaminophen rectal suppositories, differences in bodily absorption increase the weight-based dose to 20 mg/kg, with the same dosage time interval as with oral acetaminophen. 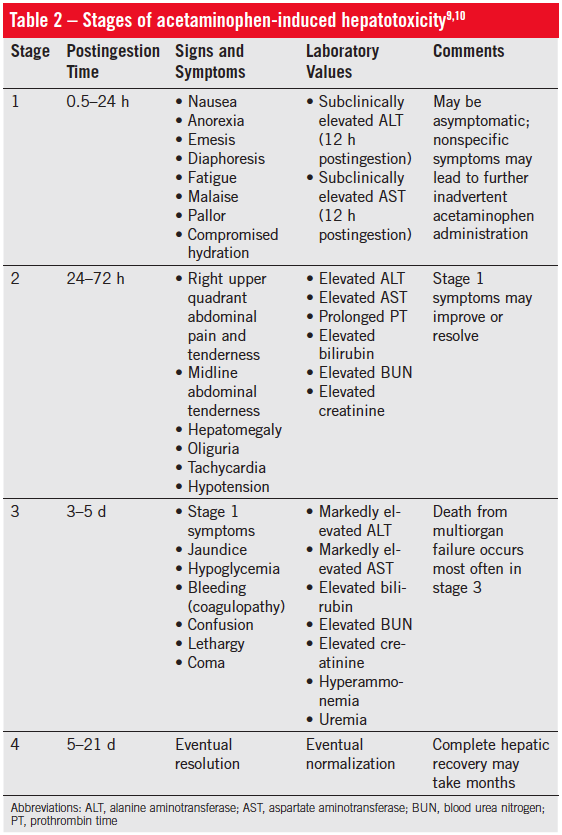 The minimum toxic single dose of acetaminophen for children is 150 mg/kg. Medical toxicologists have recommended increasing this potential toxicity dose to 200 mg/kg in healthy children aged 1 to 6 years. Children at this young age are able to metabolize acetaminophen and to detoxify NAPQI more efficiently due to their greater hepatic mass (comparing organ weight to total body weight). For adult-size patients (greater than 50 kg), the minimum toxic single dose is 7.5 to 10 g.

Children who ingest a single dose greater than 250 mg/kg have significant risk of developing acetaminophen-induced hepatotoxicity. Adults who acutely ingest greater than 150 mg/kg or more than 12 g of acetaminophen have severe hepatic risk. In these situations, immediate medical care is imperative to prevent liver injury. 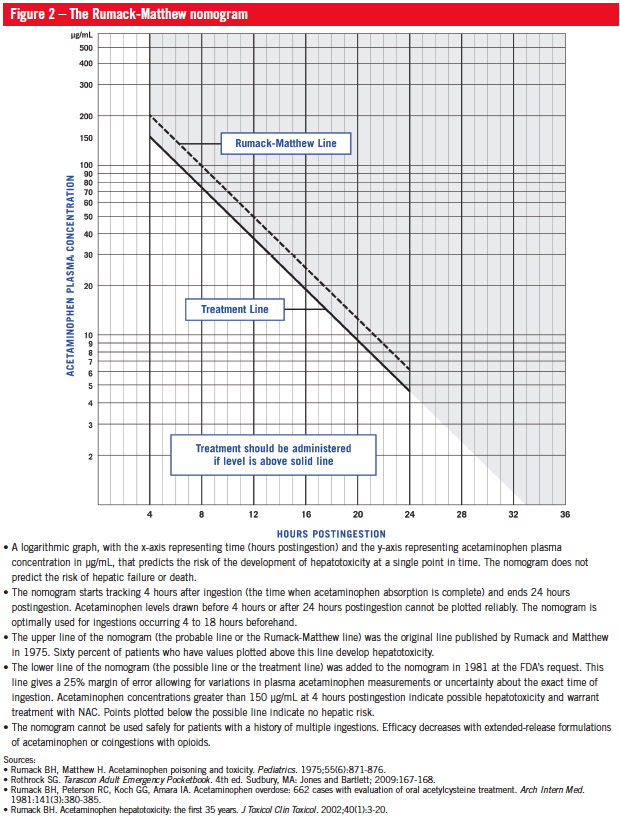 The early symptoms of acute acetaminophen overdose are outlined in Table 1. Four clinical stages (or phases) are defined for untreated patients with a history of acetaminophen poisoning who subsequently develop acetaminophen-induced hepatotoxicity and liver failure (Table 2).9,10

Stage 1: 0.5 to 24 hours postingestion. Overall clinical findings are nonspecific and range from asymptomatic to nausea, anorexia, emesis, diaphoresis, and fatigue. Given these nonspecific symptoms, patients are at risk of being given an acetaminophen-based product to treat their complaints. Physical findings may reveal compromised hydration status resulting from repeated emesis and increased insensible fluid losses. Elevation of liver transaminases (alanine transaminase and aspartate transaminase) is seen on laboratory study results 12 hours postingestion.

Stage 4: 5 to 14 days postingestion, up to 21 days. This stage marks either death or resolution of symptoms with eventual normalization of blood laboratory values. 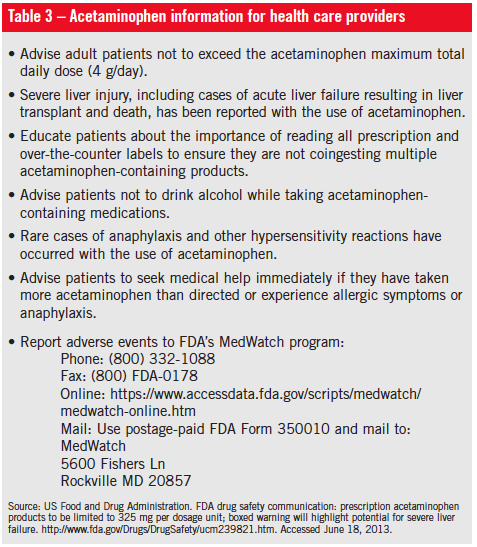 Other diagnoses should be considered in patients who present with acute hepatic tissue injury. Among the diagnoses that are worthy of attention are inborn errors of metabolism, such as α1-antitrypsin deficiency or fatty acid oxidation abnormalities; gastroenteritis; Reye syndrome (if a child has a history of aspirin ingestion); hepatitis A, B, and C; and hepatitis caused by cytomegalovirus, Epstein-Barr virus, or varicella. Other possible diagnoses include drug-induced or toxin-induced hepatitis (eg, amatoxin from mushroom ingestion), hepatobiliary disease, hepatorenal syndrome, Wilson disease, pancreatitis, and pancreatic pseudocyst.9

Complete medical histories (inclusive of past and present clinical illnesses, past hospitalizations and surgeries, travel history, family history, medication history, allergies to medications or foods, and immunization status) in conjunction with a thorough physical examination can offer clues to other possible causes of hepatic insult.

A patient with a clinical history of acetaminophen poisoning should be immediately assessed in an emergency department or other hospital facility. Stabilization of the patient is critical, including completing the ABC (airway, breathing, circulation) checklist. Possible coingestion of medications including salicylates must be addressed with patients and/or caregivers, since this knowledge influences medical treatment.

In the emergency department setting, the patient may be a candidate for oral gastrointestinal decontamination using activated charcoal. Standard treatment guidelines should be followed with attention paid to protecting the patient’s airway. Information about ingestion time is critical for this intervention, since the ideal time to successfully decontaminate with activated charcoal is within 2 hours postingestion. An upper limit of 4 hours postingestion also is cited for decontamination efficacy, especially if there is a coingestant that delays gastric motility or if the ingestant is an extended-release preparation.11

The next step is to assess the patient’s risk for acetaminophen-induced hepatotoxicity. Laboratory studies inclusive of plasma acetaminophen and plasma salicylate levels (if there is any concern of a coingestant) should be obtained, in addition to a complete blood count, electrolytes, coagulation studies (prothrombin time and partial thromboplastin time), liver transaminase (alanine transaminase and aspartate transaminase) levels, and bilirubin level. Girls and women of childbearing age require a pregnancy test, because acetaminophen crosses the placental barrier and can pose a fetal risk. The ammonia level should be checked in patients with altered mental status or an encephalopathic presentation.

The therapeutic goal with NAC is to reduce the amount of hepatotoxic metabolite, NAPQI, by biotransforming it into a nontoxic form. NAC becomes cysteine, replenishing glutathione stores and serving as the substrate utilized in sulfation, the primary biochemical pathway for acetaminophen metabolism in children.

Patients with 4-hour postingestion plasma acetaminophen levels above the possible line on the Rumack-Matthew nomogram must be admitted as hospital inpatients for treatment with the antidote, NAC, and to enable ongoing clinical evaluation for signs of hepatotoxicity. Maximum hepatoprotective effect is achieved if NAC is started 8 to 10 hours postingestion. The oral form of NAC (trade name Mucomyst) is the antidote formulation of choice and is used for the treatment of acute, chronic, or late-presenting toxic acetaminophen ingestions. It also can be used successfully if gastrointestinal decontamination was done before starting the oral dosage regimen.13 The FDA-approved dosage regimen for oral NAC is as follows13:

• Medication is administered every 4 hours until completed

• Duration of treatment is 72 hours

A drawback to the oral NAC regimen is the solution’s sulfur odor. Even when mixed in fruit juice or in a clear carbonated beverage, the smell can induce nausea and vomiting. These gastrointestinal issues can be compounded by acetaminophen-induced hepatic injury. Concurrent use of antiemetics such as metoclopramide or ondansetron may be required to continue treatment successfully. Emesis of the NAC solution within 1 hour of administration requires repeating the dose for effective treatment.

An intravenous formulation of NAC (trade name Acetadote), FDA-approved in 2004, is reserved for patients with altered mental status, gastrointestinal bleeding, history of a caustic ingestion, or refractory emesis despite the use of antiemetics. Two protocols are recognized: a 21-hour intravenous course or a 48-hour intravenous course. Up to 9% of patients who receive the intravenous antidote experience anaphylactoid reactions, triggering symptoms of flushing, pruritus, rash, and, rarely, bronchospasm and hypotension. This histamine-release response responds well to intravenous antihistamines and to slowing or stopping the infusion.14

Additional medical support can be provided by a medical toxicologist, especially for the care of patients with a concern for coingestions, complicated past or present medical histories, or an atypical clinical presentation. For patients with a significant risk of hepatotoxicity based on their initial acetaminophen plasma value as plotted on the Rumack-Matthew nomogram, consultation with a pediatric gastroenterologist who specializes in hepatology and who is affiliated with a liver transplant center is highly recommended. Ingestions carried out with intent to self-harm require intervention by the hospital’s social work and mental health teams.

Mortality from acetaminophen-induced hepatotoxicity is uncommon. Fatalities resulting from hepatic and multiorgan failure occur in less than 4% of untreated adolescents and adults with history of a single acetaminophen ingestion of less than 15 g.13 Patients with acetaminophen poisoning who receive NAC within 8 to 10 hours postingestion have a positive prognosis for recovery.

Acetaminophen poisoning is a serious medical concern given the known risk for hepatotoxicity leading to hepatic failure and death. Acetaminophen is readily accessible, has an excellent safety profile, and relieves pain and fever when administered properly; nevertheless, acetaminophen toxicity is the leading cause of acute liver failure in the United States.

The recent modifications to dosage guidelines and the addition of product warnings have placed acetaminophen in the medical and pharmaceutical spotlights. Continued awareness and ongoing public education about the risks of acetaminophen toxicity aim at further minimizing this hazard and increasing the medication’s safety profile (Sidebar). 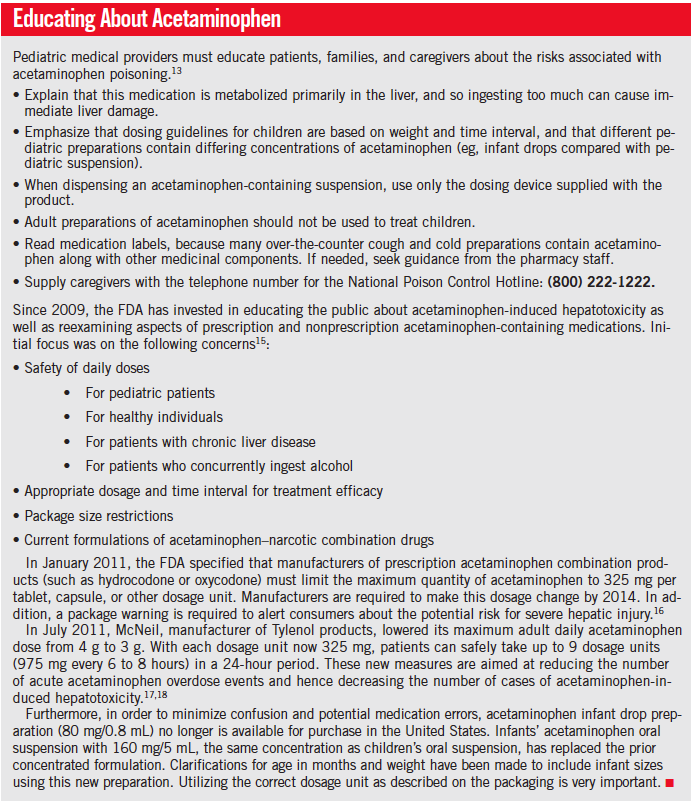 14. Blackford MG, Felter T, Gothard MD, Reed MD. Assessment of the clinical use of intravenous and oral N-acetylcysteine in the treatment of acute acetaminophen poisoning in children: a retrospective review. Clin Ther. 2011;33(9):1322-1330.