ABSTRACT: Inherited or “pattern” baldness affects many more men than women. The hair loss pattern differs between the sexes. In men, the hair loss usually starts with a receding hairline, while in women it manifests as diffuse thinning of the hair on the crown. Diffuse alopecia can also result from iron deficiency; hypothyroidism; chronic renal failure; hypoproteinemia; severe inflammatory skin diseases, such as erythroderma; and the use of certain medications. Changes in the thickness, shape, color, and growth rate of the nails occur with aging. Nails become dry and brittle and flat or concave instead of convex. Longitudinal ridging and/or hyperkeratosis can also develop. 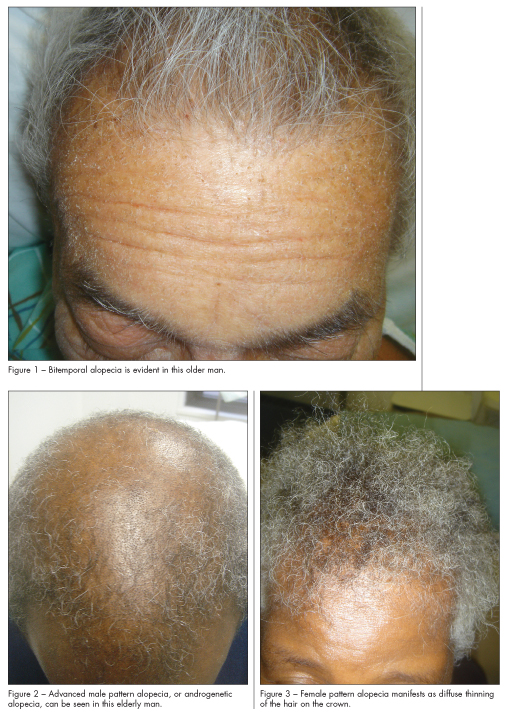 An understanding of the normal changes in the skin, hair, and nails of persons over age 65 allows us to separate the physiologic pathology that parallels senescence from the physical pathos of the passage of time. The changes we see in aging faces and bodies are due both to factors that are hard-wired and intrinsic and to factors that are environmental and extrinsic.

In this article, the second in a 2-part series, I discuss the changes that occur with aging in the hair and nails of the elderly. In part 1 (CONSULANT, December 2011, page 933), I addressed age-related changes in the skin and musculature of the elderly.

Hair loss from the vertex and frontotemporal regions (androgenetic alopecia) in men begins between the late teens and the late 20s. By the time they reach their 60s, 80% of men are substantially bald.1 There are actually two types of male alopecia:

•Bitemporal alopecia (Figure 1), which is universal, constant, gradual, and does not respond to treatment.

•Male pattern baldness (or androgenetic alopecia) (Figure 2), which accounts for the majority of all hair loss and can be treated with oral finasteride and/or topical minoxidil.

Female baldness tends to be associated with more diffuse hair loss than occurs in men. Most women develop widening partings and thinning of the hair all over the scalp with age; this process starts in the teens or early twenties, and it affects 50% of women by the age of 50 (Figure 3).2 After the menopause, thinning of the hair is more pronounced. In women, vertex hair loss may occur after menopause, although it is rarely as pronounced as in men. Hair can also become thin in the frontotemporal regions, similar to the male pattern; this probably results from age-related hormonal changes.

A cause of alopecia that is more common in women than in men is related to injury from bleaches and relaxants, which damage the hair so that follicles atrophy and the texture of existing hair is more brittle. The hair of persons of African-Caribbean ancestry is especially vulnerable.

Diffuse alopecia can also result from iron deficiency, hypothyroidism, chronic renal failure, hypoproteinemia, and/or severe inflammatory skin diseases, such as erythroderma.3 Hair loss with scarring is relatively rare and is associated with disease rather than with aging. If the clinical picture does not fit the typical pattern of hair loss or if the patient thinks the hair loss is pathologic, I in concert with the patient’s primary care physician try to investigate possible underlying pathology. 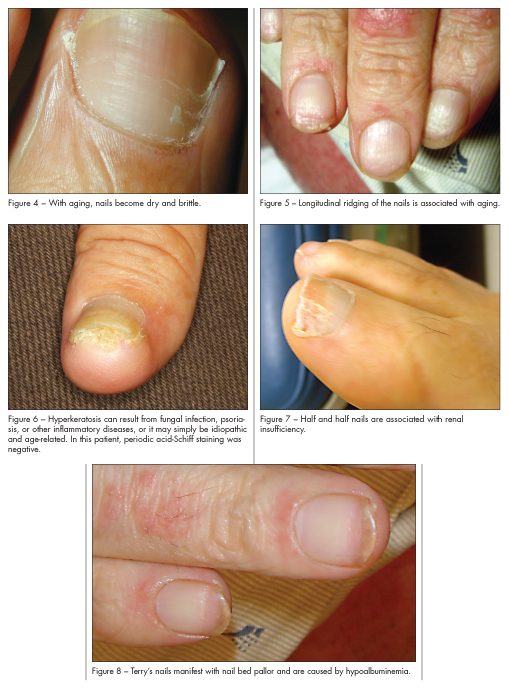 Many medications used by the elderly can cause hair loss, and older adults take many more medications than younger adults. In fact, the average person in the United States over the age of 65 takes 4 or 5 medications on a regular basis.4 If I suspect that a medication is causing alopecia, I discuss this with the patient’s primary care physician and determine whether a different medication can be substituted. Drugs that may cause hair thinning include5:

•Anticancer drugs (tamoxifen can cause alopecia).

Both men and women grow more or new hair in old age in areas that did not previously demonstrate this type or level of hair growth. Excessive or unwanted hair growth occurs after menopause in women, presumably as a result of the altered estrogen-androgen balance in hormonally sensitive hair follicles. The most common complaint is the appearance of scattered terminal hairs in the beard area. Men may exhibit increased hair length and density in the eyebrows, nares, or ears.

Changes in the thickness, shape, color, and growth rate of the nails occur with aging. These changes are related to the supporting nail bed and germinative matrix. Nails become dry and brittle (Figure 4) and flat or concave instead of convex. Longitudinal ridging (Figure 5) and/or hyperkeratosis (Figure 6) can also develop. The hyperkeratosis can result from fungal infection, psoriasis, or other inflammatory diseases, or it may simply be idiopathic and age-related. 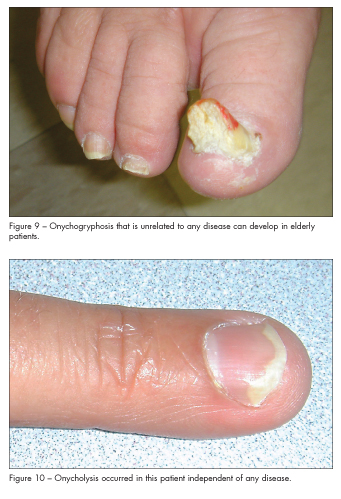 Longitudinal pigment banding affects the nails of almost all African Americans. In the elderly, the color of the nails can change from pink to yellow or gray. Half and half nails (Figure 7), which occur with renal insufficiency, and Terry’s nails (Figure 8), which manifest with nail bed pallor and are caused by hypoalbuminemia, are much more common in elderly persons than in younger adults.6 The lunula, the triangular area at the base of the nail, often loses its definition in old age. Occasionally in elderly patients, unrelated to any disease, the nail becomes grossly thickened and distorted (onychogryphosis) (Figure 9) or the nail is separated from the nail bed (onycholysis) (Figure 10).