Disseminated Histoplasmosis as a Complication of Infliximab Use

Histoplasma capsulatum is a thermally dimorphic fungus (ie, a mold that converts to yeast form at 37°C) that is endemic to Ohio and Mississippi river valleys in the United States. Among the population living in the endemic areas, 60% to 90% have evidence of exposure based on results of skin testing for the Histoplasma antigen.1 Histoplasmosis is rarely symptomatic in normal healthy adults but can cause severe disseminated infection in patients who are immunocompromised. Histoplasmosis is the most common endemic fungal infection reported among patients receiving tumor necrosis factor (TNF) inhibitors. 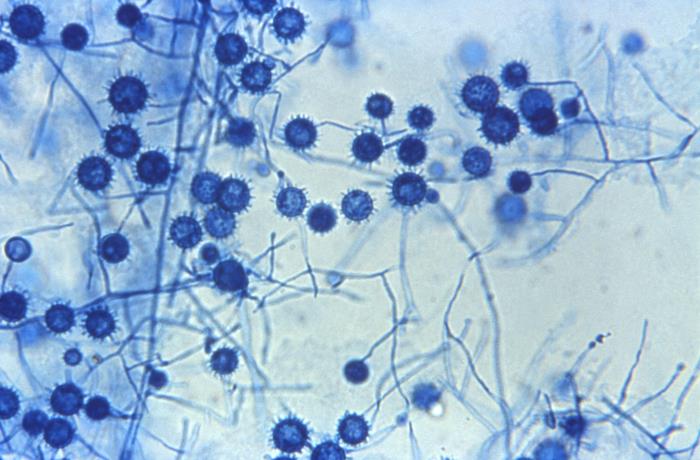 Under a low magnification, this photomicrograph of an isolate specimen, originating from a Panamanian soil sample, revealed the presence of numerous tuberculated H capsulatum macroconidia (CDC/Dr. Lucille K. Georg).

Infliximab was first approved by the US Food and Drug Administration (FDA) in 1998 for the treatment of refractory Crohn disease in adults. Later, the FDA extended its approved use to pediatric Crohn disease; ulcerative colitis in adult and pediatric patients; rheumatoid arthritis (RA) in combination with methotrexate; ankylosing spondylitis; psoriatic arthritis; and plaque psoriasis.

After infliximab was released, several case reports of histoplasmosis were published. Two case reports were published in 2002 documenting the occurrence of histoplasmosis following the use of biologic agents.2,3 Lee and colleagues reviewed Food and Drug Administration’s passive surveillance database to identify all reports received through 2001 of H capsulatum infection in patients treated with either infliximab or etanercept and found 10 cases in total, 9 of which were associated with infliximab use.4 In 2008, the FDA reviewed 240 case reports of histoplasmosis among patients on biologic agents. In at least 21 of those reports, the disease was unrecognized and antifungal treatment was delayed; 12 of the 21 patients died.5

A 57-year-old man presented to the emergency department with a 4- to 5-day history of malaise and a gradual onset of dyspnea and nonpurulent cough. The man had a history of sarcoidosis with pulmonary, optic nerve, and skin involvement, for which he was on oral prednisone (25 mg/d), subcutaneous methotrexate (20 mg/wk), trimethoprim-sulfamethoxazole prophylaxis, and intravenous infliximab (7 mg/kg every 6 weeks). He also had a history of chronic obstructive pulmonary disease, obstructive sleep apnea, hypertension, and immunoglobulin G λ monoclonal gammopathy of undetermined significance. He denied any sick contacts or recent travel.

On physical examination, the patient was noted to have rapid, shallow breathing. He was admitted for management of severe sepsis secondary to pneumonia and was started on vancomycin, piperacillin-tazobactam, and levofloxacin, in addition to fluid rehydration and stress-dose corticosteroids.

On day 3 of admission, the patient was intubated for progressive hypoxemia and respiratory distress. A rheumatologist was consulted, and all the immunosuppressive medications, including corticosteroids, were discontinued. Results of a urine Histoplasma antigen test were pending. The respiratory pathogen screen on the BAL sample was positive for rhinovirus and enterovirus, but these pathogens were not felt to be the cause of his severe respiratory compromise.

The patient remained on mechanical ventilation and eventually developed oliguric renal failure requiring hemodialysis. Given his lack of response to broad-spectrum antimicrobial therapy, micafungin was added. Bacterial culture of the BAL showed inclusions in neutrophils that were concerning for fungus, which further validated the addition of an antifungal agent. Repeated blood cultures isolated 2 different yeasts, one of which was identified as Candida albicans. The second species remained unidentified but was presumed to be H capsulatum in light of positive urine Histoplasma antigen test results. Antifungal therapy was switched from micafungin to amphotericin B and itraconazole. The presence of Histoplasma was confirmed via culture several weeks later.

Despite antifungal therapy, the patient continued to deteriorate and remained unresponsive. CT of the head showed expanding frontal hemorrhages, and he was transferred to a tertiary academic medical center for more invasive and persistent neurologic monitoring. Despite the aggressive measures, the man died several days after transfer.

In a medical record review of all patients with diagnosis of RA who developed new histoplasmosis in an endemic region between January 1, 1998, and January 30, 2009, and who were seen at the Mayo Clinic in Rochester, Minnesota, the investigators found that in most cases the lung was the site of infection.6 Fever was the most common clinical manifestation, and the most common finding on chest radiographs was focal pneumonitis, followed by an isolated pulmonary nodule.6 Chest CT also was performed in most of the patients, with the most common findings of which being pulmonary nodules and hilar mediastinal lymphadenopathy.6

Hage and colleagues described the clinical features of 19 patients at the Indiana University Medical Campus in Indianapolis who contracted histoplasmosis while receiving TNF inhibitors from 2000 through early 2009. In all, 17 (89%) of the 19 patients presented with progressive febrile illness. Pulmonary involvement occurred in 15 (79%) patients and was a prominent feature in 13 (68%).7 The investigators concluded that the clinical symptoms of the disease were nonspecific and required a high index of suspicion—especially in areas that are nonendemic.

A prolonged and worsening febrile illness or undiagnosed pneumonia should prompt consideration of histoplasmosis. Other features can include hepatosplenomegaly, extrapulmonary lymphadenopathy, oral and skin lesions, and intra-abdominal masses.7 Laboratory test findings that suggest progressive disseminated histoplasmosis include anemia, leukopenia, thrombocytopenia, hepatic enzyme elevation, and/or adrenal insufficiency.7 Diffuse reticulonodular pulmonary infiltrates are suggestive of dissemination in immunosuppressed patients.7 Signs and symptoms are nonspecific and include cough, dyspnea, fever, and malaise.8 Common findings on chest radiographs include diffuse or localized infiltrates, although findings can be normal in 40% to 70% of patients.8

Living in or traveling to endemic areas is an important risk factor in developing histoplasmosis. Disturbance of bird or bat dropping accumulations, soil disruption, and plant matter disruption are the most frequent causes of outbreaks.8 Certain activities such as spelunking or occupations involving construction, demolition, and maintenance can be associated with outbreaks.8 Immunosuppression (eg, AIDS, solid-organ transplant, use of immunosuppressive agents such as TNF inhibitors) has been identified as the most important risk factor for disseminated histoplasmosis.8

The various modalities used for laboratory diagnosis of histoplasmosis include culture and microbiology stains, histopathology, cytopathology, antigen detection, serology, and molecular methods.9 Demonstration of yeast on pathological examination of tissue and isolation of H capsulatum in the culture of clinical specimens are the diagnostic gold standards. Culture results usually take 2 to 3 weeks but may take as long as 8 weeks. The sensitivity of the culture depends on the clinical presentation (pulmonary or disseminated), immunological status of the patient, and burden of disease.9

Patients with disseminated disease have higher rates of positive culture results. When using histopathology, GMS and periodic acid–Schiff stains are required, since H capsulatum usually cannot be visualized with routine hematoxylin and eosin staining.9,10 Yeasts are usually found within macrophages and histiocytes although sometimes can be seen free in extracellular spaces.9,10 Examination of tissue aspirates and fluids (cytopathology) can aid in diagnosis. Sensitivity of BAL fluid cytopathology is approximately 50%, and when combined with BAL fluid Histoplasma antigen testing, sensitivity rises to 97%.9

Antigen testing is the leading modality for the diagnosis of histoplasmosis. It is an enzyme immunoassay that, due to its ease of use and wide accessibility, has grown in popularity with clinicians.9 Sensitivity is higher for antigen detection in urine compared with serum.9,10 Monitoring antigen levels in serum and urine can help assess treatment response.9,10 Cross-reactivity with other fungal antigens is a limitation of antigen testing.9

Empiric therapy should be started in patients who are awaiting workup if epidemiologic and clinical features are suggestive of histoplasmosis. In patients who are receiving TNF inhibitors, disease is usually severe. Liposomal amphotericin B should be started as soon as possible after obtaining tissue/fluid specimens and cultures. After clinical improvement, therapy can be switched to oral itraconazole, which is continued for 12 months.1

A high index of clinical suspicion in patients on TNF inhibitors who present with fever, malaise, and respiratory symptoms including cough and dyspnea is the key to prompt diagnosis and timely initiation of therapy for patients with disseminated histoplasmosis.