A 22-year-old man with no relevant medical history presented to the emergency department with worsening epigastric pain radiating to the rib cage and the subsequent development of fevers, chills, nausea, vomiting, joint pains, and body aches over the past 10 days despite taking acetaminophen.

History. The patient had moved from Jamaica to Long Island, New York, 2 months prior. He denied any tick bites, exposure to tuberculosis (TB), or significant zoonotic exposures. His social history was significant for daily marijuana smoking, but he denied any other recreational drug use, tobacco use, or alcohol use.

Physical examination. Vital signs at presentation included tachycardia, fever (temperature, 39.6 °C, and an oxygen saturation of 100% on room air. Physical examination findings were remarkable for bilateral rales on lung auscultation, with the right side worse than the left, and mild epigastric abdominal tenderness without rebound or guarding. 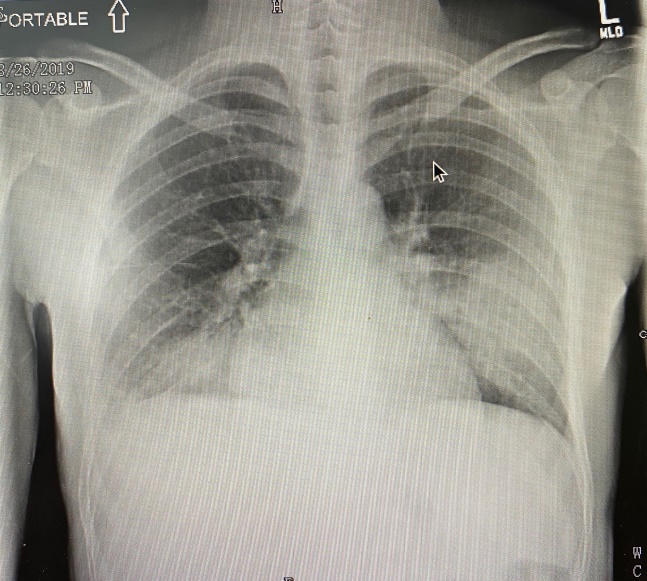 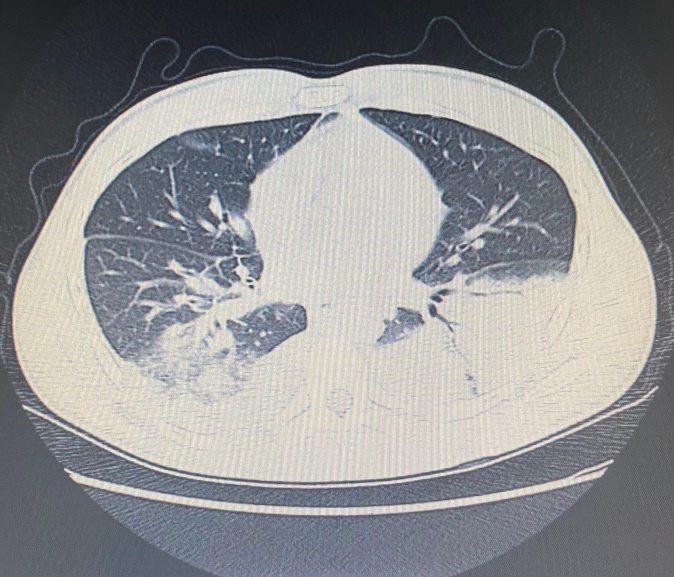 Figure 2. A CT scan of the chest confirmed bilateral lower-lobe pneumonia, with necrosis in the right lower lobe.

The patient was admitted to the hospital with severe sepsis with multiorgan dysfunction. Septic workup was initiated, and the patient was started on broad-spectrum antibiotics. Doxycycline, gentamicin, and levofloxacin were initiated after consultation with an infectious disease specialist revealed that the patient was employed as a landscaper with exposure to various animals such as rabbits and squirrels, and that his colleague had been hospitalized in another local hospital with similar symptoms.

Test results for TB, Mycoplasma pneumoniae, legionellosis, HIV, acute hepatitis, and some tickborne illnesses were negative, but serum antibody titers for Francisella tularensis were reported as equivocal at 1:20. The patient clinically improved during his 6-day hospital stay, and he was discharged on a regimen of doxycycline, 100 mg, to be taken orally twice daily for 10 days.

At a follow-up visit in the clinic 2 weeks after discharge, the patient noted drastic improvement in his symptoms. Repeated chest radiographs demonstrated a resolved right lower-lobe consolidation and improvement in the left lower-lobe consolidation. Repeated bloodwork revealed resolution of leukocytosis and improvement of transaminase levels. The patient’s elevated transaminase levels had been a result of continuous acetaminophen intake for 5 days; they normalized after cessation of acetaminophen. Results of a repeated F tularensis antibody test were 1:1280, confirming the diagnosis of tularemia.

Discussion. Tularemia is a bacterial disease caused by F tularensis, an aerobic, gram-negative, facultative intracellular bacterium. It was initially described in the 19th century when Japanese physician Homma Soken described a febrile illness associated with adenopathy in individuals who ate hare meat.1 This disease is widespread in the Northern Hemisphere, mostly occurring in forests and mountain regions, with the main endemic foci of the disease being Russia, Kazakhstan, Turkmenistan, Finland, and Sweden.2

F tularensis type A, the most virulent strain, is found almost exclusively in North America1 and is most frequently transmitted from rabbits to humans via the tick as its vector.3 Cases of tularemia are uncommon the United States, with an incidence of 0.07 per 100,000 persons in 2018.4 The annual number of reported US tularemia cases declined from several thousand in the 1930s to several hundred in the 1980s.5 Several theories have been suggested for this trend, including better arthropod bite prevention, less hunting or trapping, and a decrease in rural populations.1

F tularensis type B is found more diversely throughout Europe and is more often directly transmitted to humans without the assistance of a vector but rather via direct contact with an infected mammal, aerogenic exposure, or consumption of contaminated food or water. The natural reservoir of F tularensis is unknown; although the bacterium is heavily associated with small mammals (rodents, hares, and rabbits), these do not seem to be capable of harboring the bacteria between researched outbreaks.3 Although activities such as hunting, trapping, butchering, and farming result in disease exposure, they are frequently absent from case studies; more often, there is a history of consumption of natural spring water (a possible natural reservoir) or exposure to rodent excrements or contaminated dust.6

The clinical presentation of tularemia depends on the route of entrance of the bacterium—usually ulceroglandular or typhoidal, but oculoglandular, oropharyngeal, and pneumonic forms have also been reported. The ulceroglandular form presents in up to 85% of tularemia cases and involves a skin infection that is associated with regional lymphadenopathy.2 Because tularemia pneumonia is a more invasive form of infection, it is more likely to be caused by F tularensis type A and is much more common in North America than elsewhere.1

Respiratory tularemia, the most serious form of tularemia, may be contracted by inhalation of aerosolized F tularensis. Onset of tularemia is typically sudden, with high fevers, chills, fatigue, general body aches, headache, and nausea. Respiratory tularemia can present with symptoms such as dry cough and dyspnea, but it just as frequently presents with fever and general malaise without respiratory symptoms.3 When a patient infected with F tularensis infection presents with pneumonia, it is likely that the respiratory symptoms began a few weeks after initial symptoms.1

As such, our patient presented with constitutional symptoms and was admitted with bilateral pneumonia without striking respiratory symptoms. It is believed that F tularensis can become aerosolized through lawnmowing or brush cutting, which may explain why landscapers and farmers are at an increased risk of developing pneumonic tularemia.1 Our patient was most likely exposed to contaminated dust during his occupation as a landscaper.

The diagnosis of tularemia relies on serology via tube agglutination testing with a 4-fold change in specific antibody titers between acute and convalescent sera. These are best drawn at least 4 weeks after illness onset.4 Our patient’s titers had a characteristic 4-fold increase, confirming the diagnosis. Prior to the advent of effective antibiotics, the mortality rate for type A tularemia pneumonia was between 30% and 60%.3 Today, treatment for tularemia includes a 10- to 21-day course of antibiotic therapy with streptomycin, gentamicin, doxycycline, or ciprofloxacin. In most cases there is complete recovery.4 Our patient improved dramatically with appropriate antibiotic treatment.

It is important to be aware of the clinical manifestations and risk factors of tularemia to successfully diagnose and treat this rare disease.