An 83-year-old man was referred from urgent care to the ophthalmology clinic for evaluation of new-onset binocular diplopia, vision loss in his left eye, and a progressive drooping of his left upper eyelid. Both the patient and his wife noted that these symptoms had been present and had progressed in severity over the previous 2 weeks. He reported no changes in his constitution or mentation over the same period, and he appeared to be in good health overall.

History. The patient had a prior diagnosis of moderate-stage primary open-angle glaucoma with scattered visual field defects in his right eye. His right eye had been treated 5 years earlier with endoscopic cyclophotocoagulation glaucoma laser to lower his intraocular pressure. Following the laser treatment, he no longer needed glaucoma medications to maintain his target intraocular pressure.

The patient reported no history of past or recent head trauma. He had a remote history of nasal surgery in the 1980s for an obstruction but was uncertain of the surgical details. He had stopped smoking more than 50 years ago and rarely consumes alcohol. He reported no unexplained weight loss, fever, lymphadenopathy, chills or other constitutional symptoms. He had worked as a salesperson for a corrugated cardboard company and had spent a fair amount of time in cardboard plants, but he had been retired for more than 10 years. At the time of his initial evaluation, he was taking simvastatin and loratadine.

Physical and ocular examination. The patient presented with left upper eyelid ptosis, ipsilateral superior-temporal extraocular muscle restriction, ocular misalignment, pupil asymmetry with increased pupil diameter in the left eye, and an edematous left optic nerve head (Figures 1 and 2). The diameter of his left pupil was larger than the diameter of the right pupil. A 0.9-log-unit afferent pupillary defect was present in his left eye, as well. The patient was unable to elevate his left upper eye lid without recruitment of the frontalis muscle. The appearances of the right upper eyelid and right eye were unremarkable. Visual acuity was 20/25 in the right eye and 20/30 in the left eye. 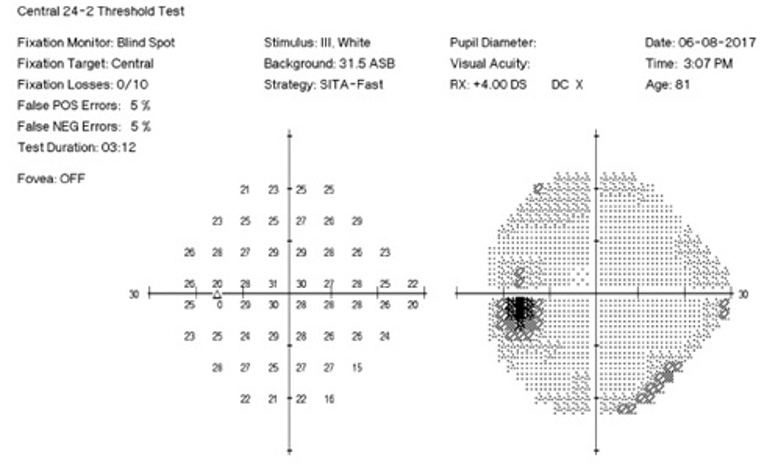 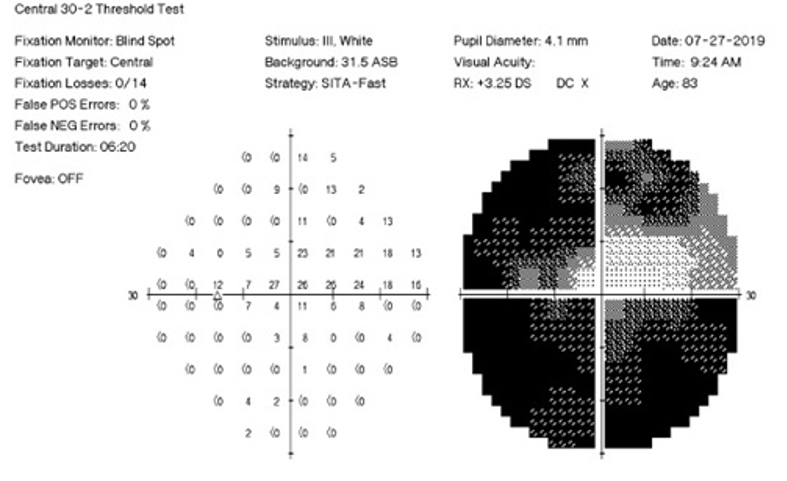 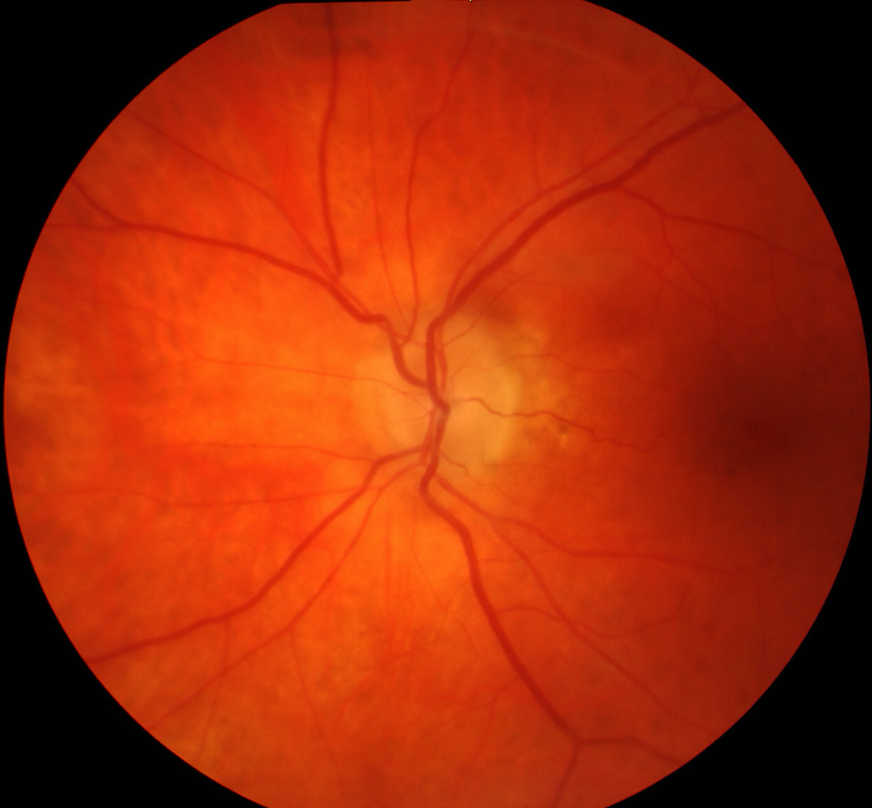 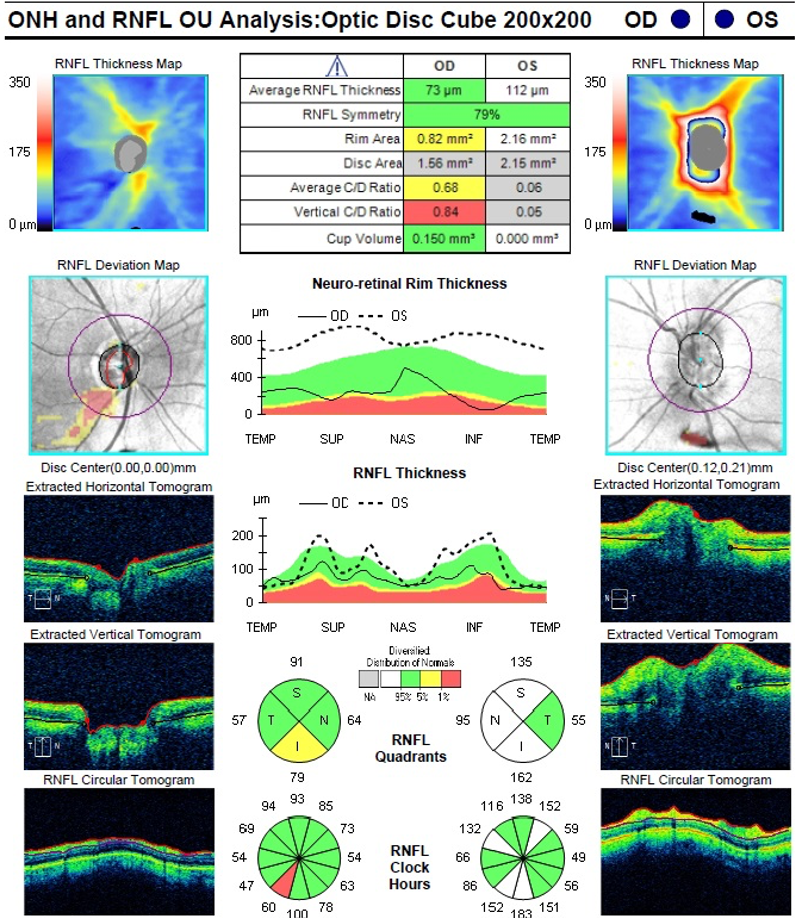 A computed tomography (CT) scan with and without contrast and CT angiography (CTA) of the head were obtained. The CT images showed a nonenhancing, soft-tissue mass in the left sphenoid sinus extending into the sella turcica and temporal fossa causing bone erosion of the sphenoid sinus and lateral displacement the left internal carotid artery and carotid syphon (Figure 7). The CTA results were unremarkable. 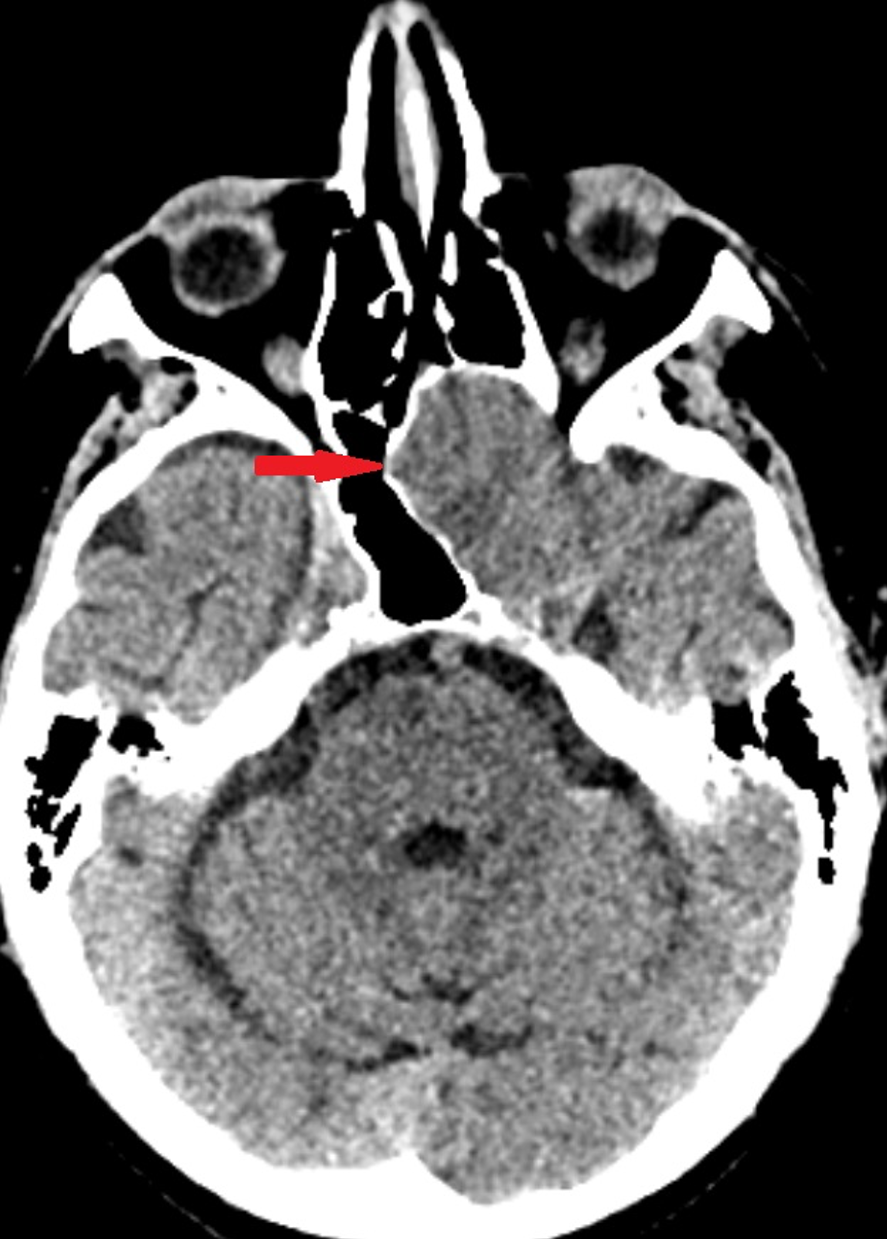 A magnetic resonance imaging (MRI) scan was also obtained, which showed a cystlike lesion of the sphenoid sinus (Figures 8 and 9). Magnetic resonance angiography (MRA) results were unremarkable. Nasal endoscopy examination confirmed the presence of an extensive left sphenoid sinus mucocele with mild septum deviation to the left (Figure 10). There was no purulence or polyps bilaterally. 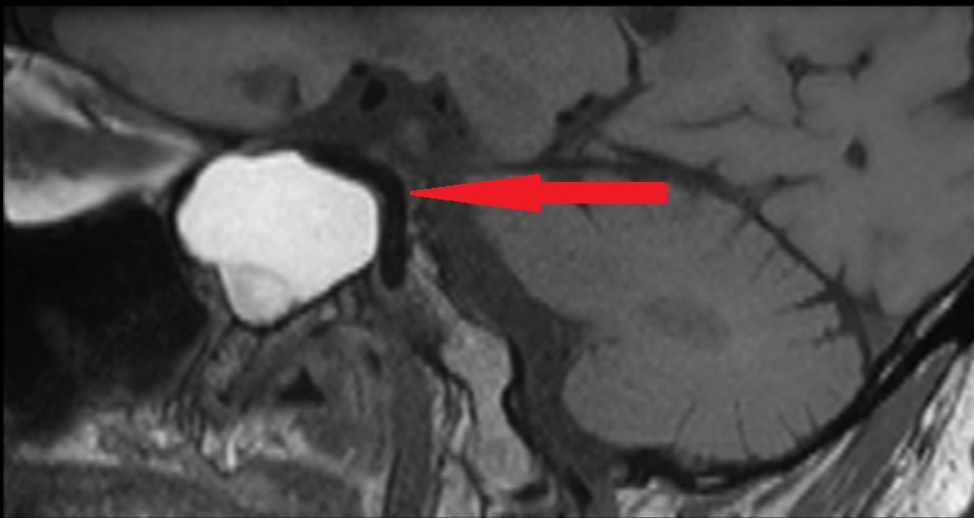 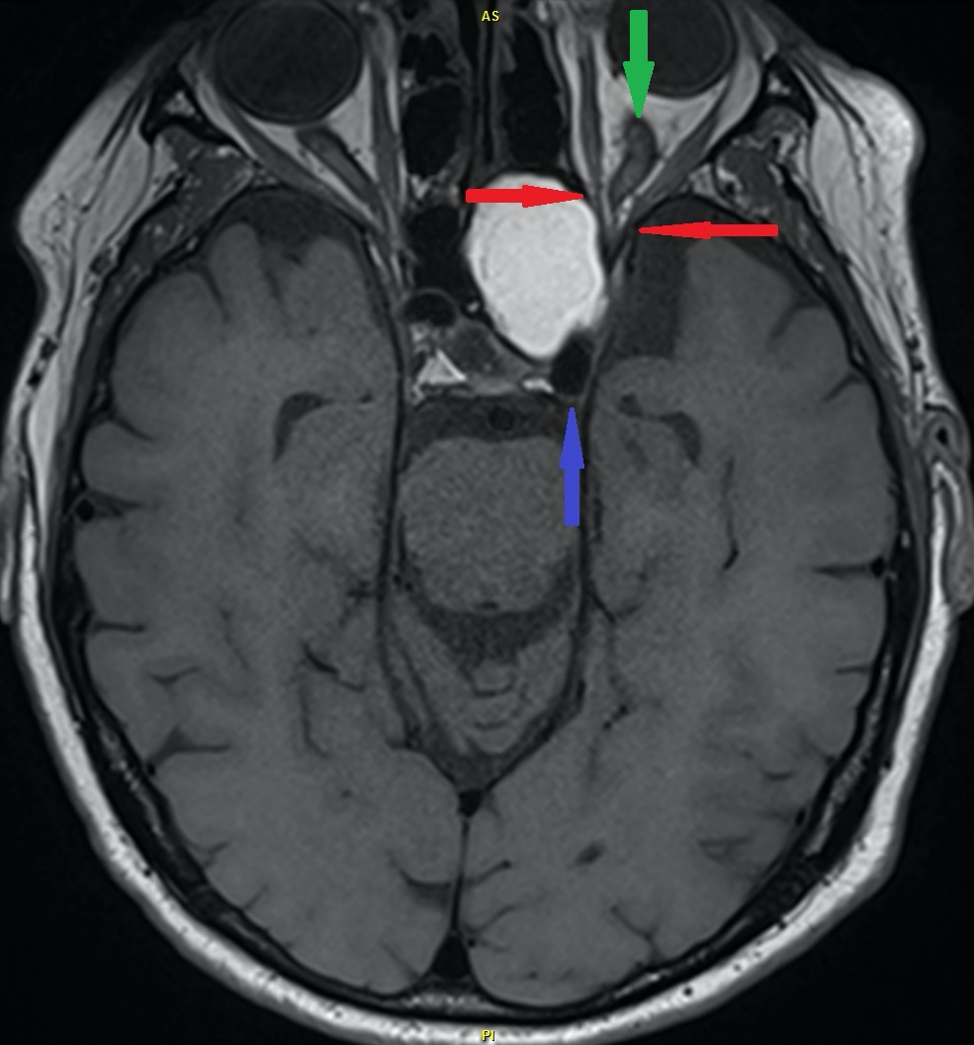 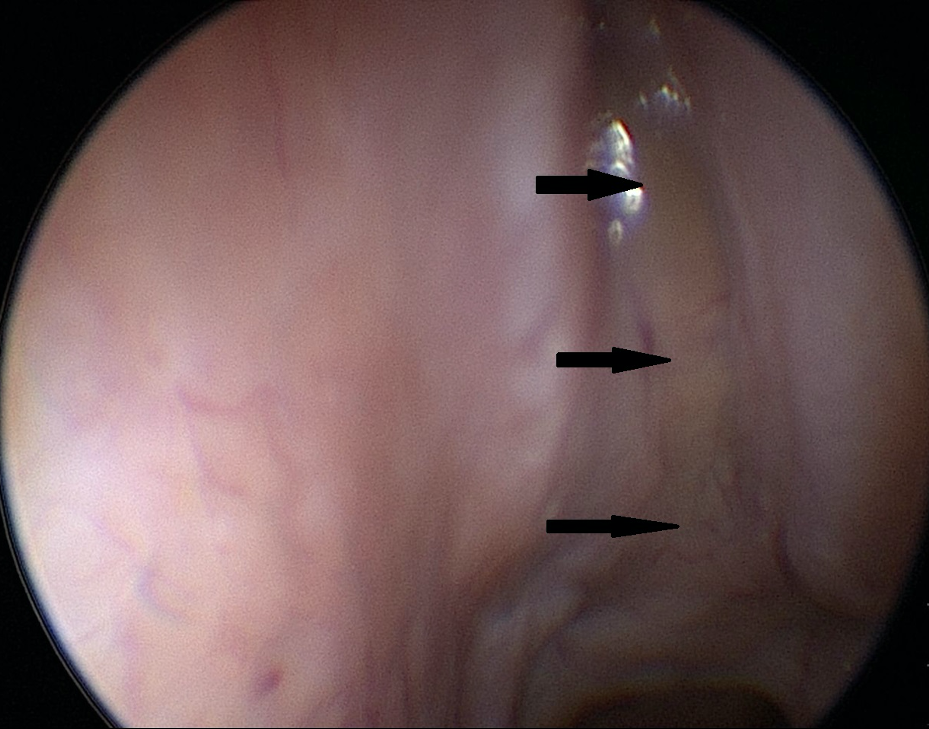 Figure 10. Endoscopic image showing the base of the sphenoid sinus mucocele (arrows).

Diagnosis. After examination and diagnostic testing was completed, the patient received a diagnosis of pupil-involving, left oculomotor nerve palsy and compression of the left optic nerve secondary to an expansive sphenoid sinus mucocele. The proximity of the mucocele to the midbrain and cranial nerves caused mechanical compression and functional depression of the left optic and oculomotor nerves.

Outcome of the case. The patient was taken to surgery by the otolaryngology team, where a large amount of inspissated mucoid secretion and mucocele itself were evacuated (Figure 11). The sinus was sequentially irrigated revealing the exposed pulsatile carotid, as well as the dura. There was no cerebral spinal fluid leakage and no damage to the carotid artery. The pathology report of the involved tissue showed chronic inflammatory changes without signs of a tumor. The patient tolerated the procedure well and was examined again by ophthalmology 1 month afterwards. 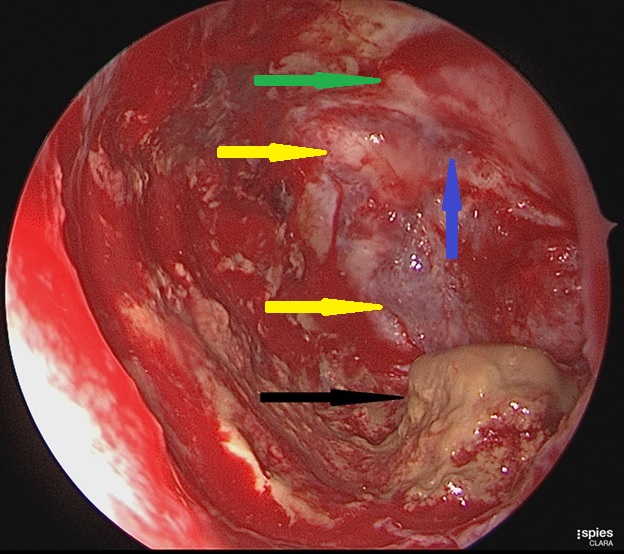 Upon ophthalmic examination, the patient showed, both objectively and subjectively, complete resolution of his diplopia and previous extraocular muscle deficit. The dense and extensive visual field depression in his left eye had significantly improved (Figure 12). OCT imaging showed resolution of optic nerve head edema (Figure 13). Ptosis of the upper left eyelid remained but the eyelid position was improved. 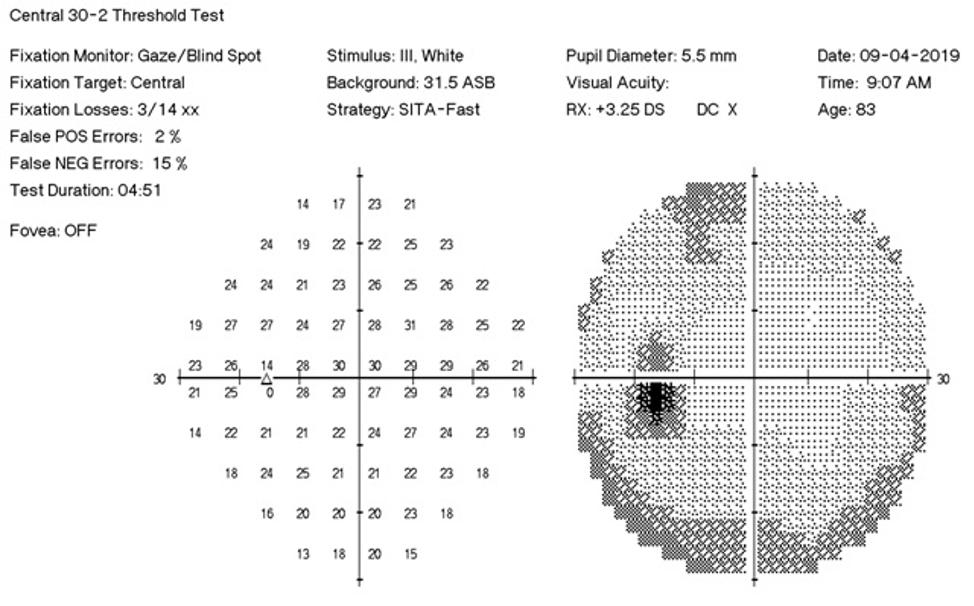 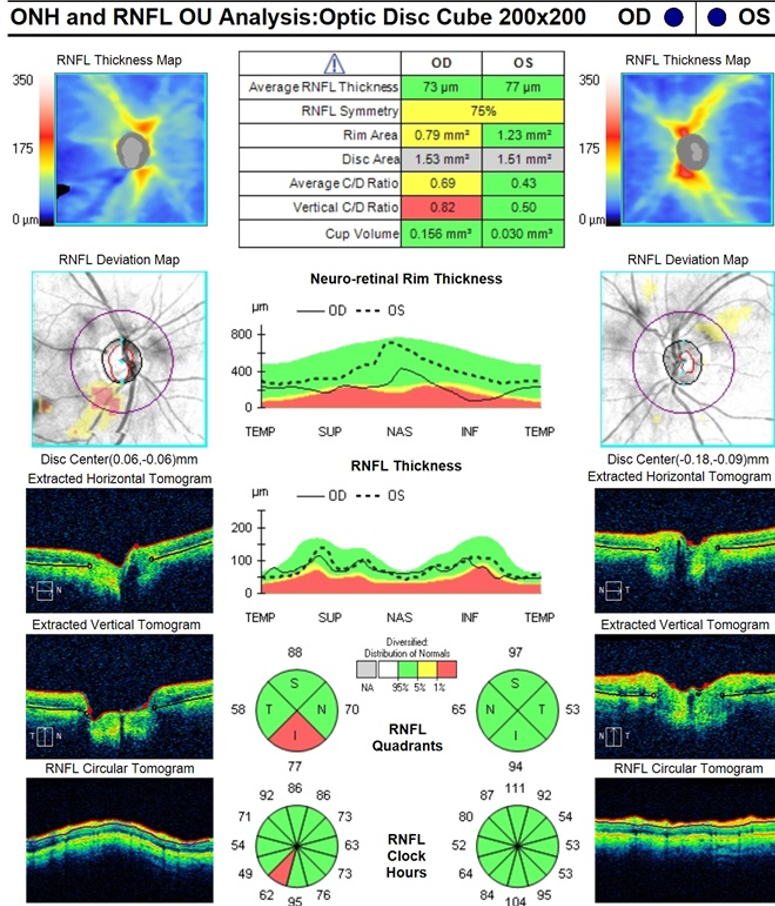 These lesions are ordinarily benign, but longstanding cases may histologically show squamous metaplasia. Mucoceles are expansile in nature and may cause erosion of proximal bony sinus cavity walls, displacement of surrounding tissues, and mass effect damage. Sphenoid sinus mucoceles may have an ominous presentation given their space-occupying nature and proximity to cranial nerves, the cavernous sinus, the internal carotid artery, pituitary gland, and dura.3,4

Presentation. Space-occupying lesions of the sphenoid sinus may impact the function of several cranial nerves, causing ophthalmic complications. The second, third, fourth, fifth, and sixth nerves may all be impacted by mechanical compression from an expanding mucocele. This compression may cause ipsilateral muscle palsy to any or all of the 6 extraocular muscles. Symptoms of new-onset vision loss with or without new onset diplopia always warrant further examination to determine the etiology.

Diagnosis. A CT scan of a paranasal sinus mucocele will display a homogenous, well circumscribed mass located within the sinuses, which may affect and displace the bony walls of the sinus and neighboring structures. Paranasal sinus mucoceles may image as hypodense, isodense, or hyperdense compared with the surrounding tissues. MRI scans also may reveal variable intensity of T1-weighted images and a hyperintense mass on T2-weighted images, depending on the composition, contents, and hydration of the mucocele.4,5

Treatment. Historically, paranasal sinus mucoceles had been excised by opening the involved sinus cavity externally. Surgical removal of mucoceles through endoscopic nasal sinus surgery is less invasive and better tolerated than the open sinus approach. The endoscopic surgical procedure has high success rates and recurrence rates close to zero. Endonasal evacuation and marsupialization of paranasal sinus mucoceles has also been shown to reverse vision loss resulting from the presence of a mucocele. In cases where the mucocele was removed within 6 days of initial presentation, even severe vision loss was reversed.6

Take-home message. Patients presenting with new-onset diplopia, vision loss, and extraocular muscle restriction always warrant thorough investigation to determine the etiology. In cases where paranasal sinus mucoceles are the cause, long-term visual and ophthalmic outcomes are often favorable when appropriate surgical intervention is taken in a timely manner.