DISCLAIMER:
The views expressed in this article are those of the authors and do not necessarily reflect the official policy or position of the Department of the Navy, the Department of Defense, or the US Government.

A 23-year-old military pilot presented to an aviation clinic for his annual flight physical examination. At the start of the examination, the patient drew the flight surgeon’s attention to a lump on the left side of his neck.

At the current visit, the flight surgeon ordered a series of laboratory tests, including a complete blood cell count, a comprehensive metabolic panel, erythrocyte sedimentation rate, C-reactive protein level, and thyrotropin level, all of which were all within normal limits.

The lump in the patient’s neck was roughly palpated as a 4.5 × 3.5-cm mass in the left level II cervical lymph nodes (Figure 1). The mass was not tender to palpation, but because it had been present for more than 3 months, the flight surgeon ordered ultrasonography, which showed a circumscribed, relatively homogeneous, hypoechoic ovoid mass measuring 3.7 × 1.9 × 2.8 cm (Figure 2). 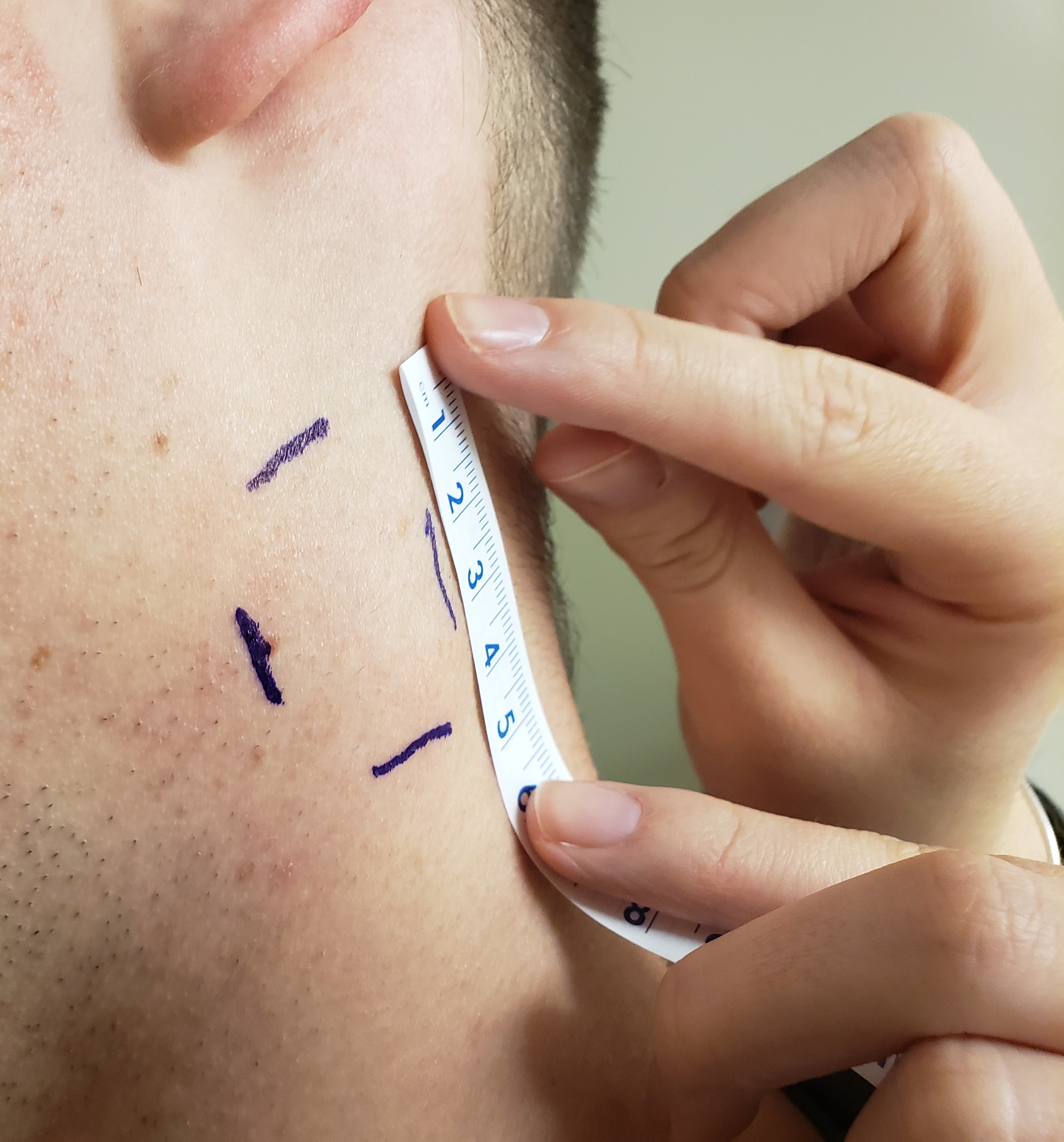 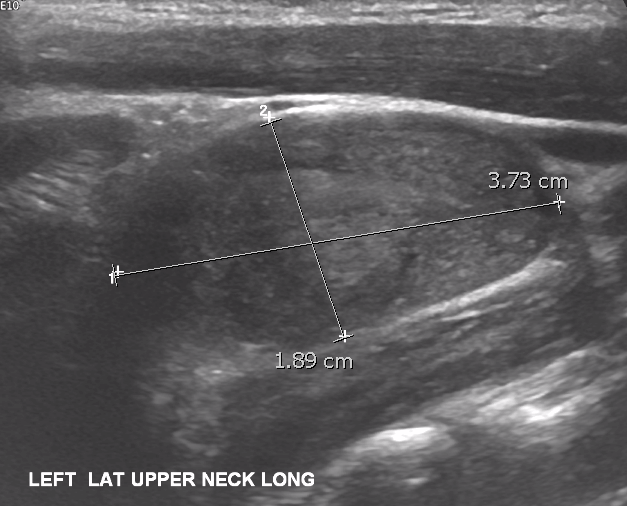 The ultrasonography radiologist identified the mass as an abnormal lymph node and recommended a follow-up computed tomography (CT) scan of the neck and chest. The CT image revealed no other cervical or supraclavicular abnormalities besides the mass in question, which was an enlarged level II lymph node deep to the left sternocleidomastoid muscle, measuring 1.7 cm on the short axis, with rounded morphology (Figure 3). The patient was referred to an otorhinolaryngologist for further workup. 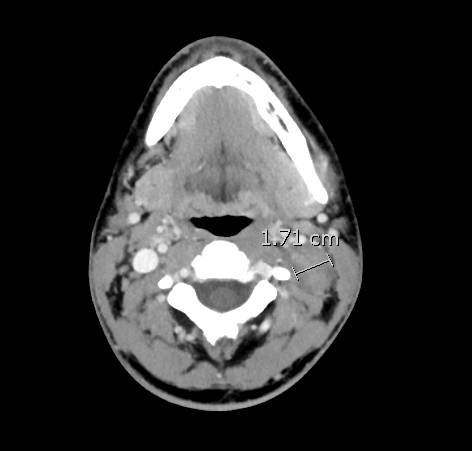 The otorhinolaryngologist scheduled an ultrasound-guided fine-needle aspiration biopsy, which was conducted without complications. The local pathologist identified spindle cell proliferation but did not identify lymphoid tissues on the sample. The spindled proliferation showed slightly irregular nuclei, which favored a neural or fibrous proliferation. A portion of the sample was sent for flow cytometry analysis, and the Department of Defense’s Joint Pathology Center (JPC) was consulted.

The biopsy sample and radiographic images were discussed by the head and neck/endocrine pathology section of JPC, and the case was presented at a tumor board to review the indicators of potentially cancerous growths. Microscopic examination showed minute fragments of cytologically bland spindle cell proliferation with Verocay bodies and associated nuclear palisading (Figure 4). Lymphocytes and lymphoid tissue were not appreciated, and flow cytometry was unsuccessful due to insufficient viable cells for analysis. 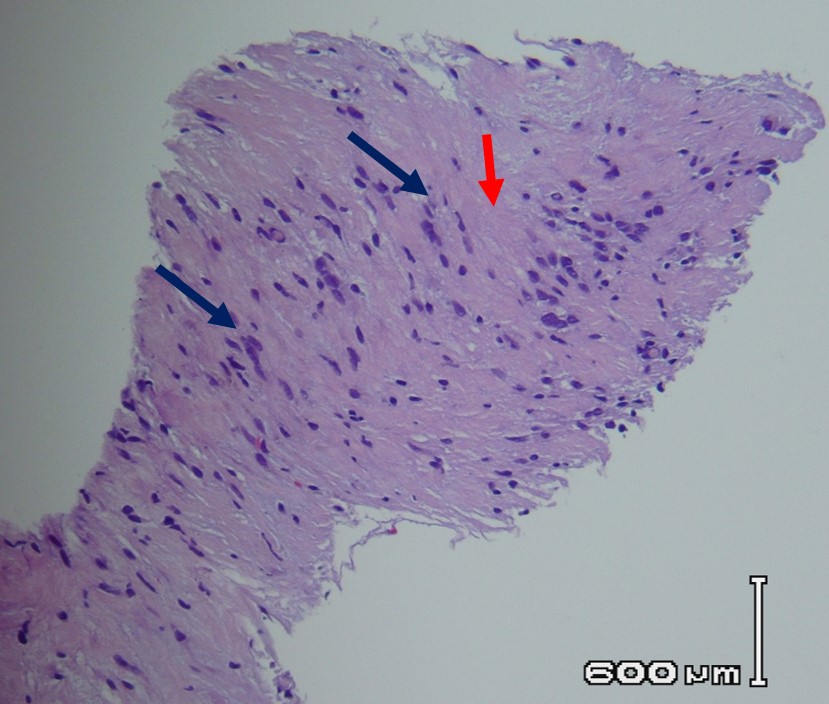 Immunohistochemical stains showed strong positive results for S-100 and SOX-10 proteins, consistent with findings seen in a schwannoma (Figure 5). The periphery partially stained with CD34, while immunostains for AE1/AE3 and beta-catenin were negative.

After reviewing the evidence, the sample was determined to indicate a peripheral nerve sheath tumor consistent with a schwannoma, and a follow-on magnetic resonance imaging (MRI) scan was ordered to determine a strategy for how to proceed. The MRI showed an ovoid, spindle-shaped, T1-isointense and heterogeneously T2-hyperintense mass measuring 2.4 × 1.7 × 3.3 cm (anteroposterior × transverse × craniocaudal), located posterior to the left carotid and jugular veins and deep to the sternocleidomastoid muscle (Figure 6). The findings were consistent with a schwannoma that had been previously diagnosed by the JPC. 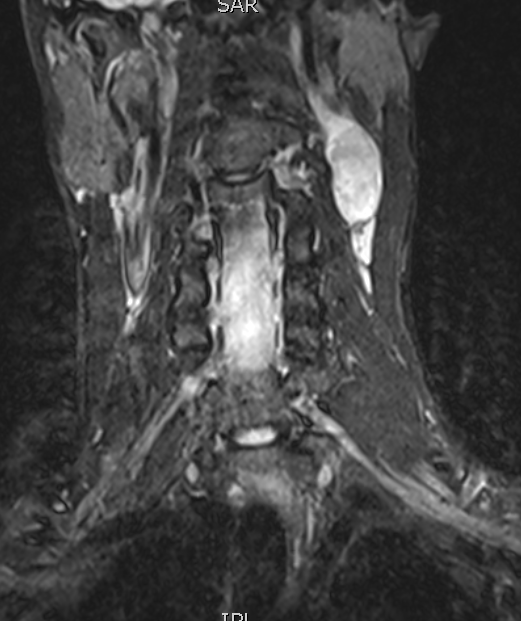 Treatment of a schwannoma is challenging for several reasons. Cervical schwannomas in particular are rare1,2 and lack specific diagnostic and treatment algorithms. The exact location of the schwannoma is often impossible to determine until the growth is visualized during a surgical procedure. The tumors are difficult to distinguish on imaging, even with multiple imaging modalities, and schwannomas of the vagus nerve and the cervical sympathetic chain cannot be distinguished without radiologic signs of separation between the common carotid artery and internal jugular vein (as evidenced in this patient’s case, with no separation noted).3-5

Despite the challenges of identifying and pinpointing a schwannoma, surgical excision is the treatment of choice once action is determined to be necessary or preferable. A schwannoma is a benign tumor, so most surgeons will use a subcapsular technique or enucleation. Surgical approaches will result in varying degrees of nerve morbidity depending on the nerve of origin, tumor size, and surgical technique and must therefore be evaluated on a case-by-case basis. Additionally, the morbidity can present as varied levels of hoarseness and/or Horner syndrome (oculosympathetic paresis), and a patient’s individual experience will not be known until after the excision procedure.

Clinicians must consider several important questions: Can we merely observe the schwannoma, particularly if the patient is asymptomatic? If we must remove the tumor, can morbidity be managed in a way that will permit the patient to continue a normal life? In this specific patient’s case, can the patient continue flying as a military pilot after excision? Consideration of the immediate risks and benefits favors the watch-and-wait option. However, if the schwannoma is a slow-growing tumor, observation may not be the best option for younger patients. If a cervical tumor acts similarly to other cranial schwannomas, one can expect 2 to 3 mm of growth annually6; do we incur unnecessary risks by waiting until the patient becomes symptomatic, and the increased tumor size results in potentially greater postsurgical morbidity? At this time, there is no clear answer to these concerns due to the rarity of these tumors, and the course of action is ultimately left to the patient.

It is also difficult to recommend a course of action in the absence of preoperative symptoms that indicate the tumor is affecting the vagus nerve (hoarseness) or the sympathetic chain (Horner syndrome). Without knowing the location of the tumor, it is impossible to identify the corresponding possible outcomes and postsurgical complications.

When evaluating the eyes for miosis, anisocoria will be more prominent in the dark and will also be particularly noticeable due to asymmetric dilation lag when a light source is removed. The Horner syndrome pupil will dilate slower than the unaffected pupil by as much as 15 to 20 seconds.8 Due to this dilation lag, will the miosis affect the patient’s ability to drive—or in this case fly a military aircraft?

The ptosis that occurs with Horner syndrome tends to be minor, because the sympathetic pathway specifically innervates superior tarsal muscle, in contrast to the ptosis seen in oculomotor nerve (cranial nerve III) palsy, which affects the entire levator palpebrae superioris.

With reference to proceeding in this case, the otorhinolaryngology department chair at the Naval Aerospace Medicine Institute (NAMI) in Pensacola, Florida, stated that a conservative approach to observing tumor growth is generally recommended, given that patients and surgeons prefer to avoid a potentially morbid intervention with an otherwise asymptomatic benign mass. However, some patients prefer to have any mass removed immediately, regardless of growth activity, varying with personal comfort level with risks associated with observation vs surgical intervention. The patient was referred to Vanderbilt Bill Wilkerson Center in Nashville, Tennessee, to discuss possible courses of action.

After considering both options—watch and wait vs surgical removal—the patient choose to undergo surgery. He was scheduled for surgery 2 weeks after his consultation. During surgery, it was revealed that the parapharyngeal space tumor was a schwannoma of the sympathetic trunk and not the vagus nerve. Enucleation of the 3-cm schwannoma was successful (Figure 7).

Figure 7. Surgical excision of the schwannoma.

The patient’s postsurgical complications were minimal, and his Jackson Pratt drain was removed 6 days later at a follow-up visit. He exhibited the expected Horner syndrome ptosis and miosis in the left eye (Figure 8), although anhidrosis was not apparent.

Figure 8. Postsurgical miosis and ptosis of the left eye.

The patient returned to duty 2 weeks after surgery and underwent vision testing at NAMI. His near and distant vision remained 20/20 in both eyes, and his pupil size was measured at 3 mm OS and 4 mm OD in a light room, and 4 mm OS and 5 mm OD in a dark room. After his evaluation, it was determined that the Horner syndrome had no impact on his vision, and a waiver was recommended requiring him to undergo an annual ophthalmologic examination for the next 5 years. He resumed flight training within a month of his surgery and is scheduled to undergo a follow-up MRI in 6 months to establish a new anatomic baseline.