A 33-year-old man presented to our emergency department (ED) after a few hours of nausea, vomiting, and diarrhea associated with left lower quadrant abdominal discomfort.

History. He reported some shortness of breath for 1 to 2 days prior to admission. He had a medical history of low back pain and attention-deficit hyperactivity disorder. He also had a history of methamphetamine and marijuana use. His serum creatinine level had been in the normal range 6 years prior to presentation (0.72 mg/dL), which was the last time it had been checked.

He had a 6-year history of urinary hesitancy, which he reported had started after a car accident and leg injury. He did not have any known neurologic injury to the bladder or prostate. Historically, he used over the counter phenazopyridine intermittently once or twice a week for these symptoms.

Due to bothersome symptoms, he began taking more than usual doses, and 2 days prior to presentation, he had taken 12 tablets of phenazopyridine at once, which was believed to be a total of 1200 mg. He reported having orange-colored urine, consistent with the medication’s known effect.

Physical examination. On presentation to the ED, the patient was not hypotensive but was hypoxic, with oxygen saturations ranging from 85% to 89% on room air. Examination from the peripheral hospital revealed that he was alert and cooperative, and had normal cardiac and lung examination findings. The patient did not have lower extremity edema, and his abdomen was soft with slight discomfort in left lower quadrant.

Diagnostic tests. A chest radiography scan did not show significant abnormalities, with the exception of some mild atelectasis. Renal ultrasonography results were negative for hydronephrosis. A computed tomography (CT) scan of the abdomen showed perinephric stranding and 2 discrete calculi in the right posterior bladder (Figures 1-3). 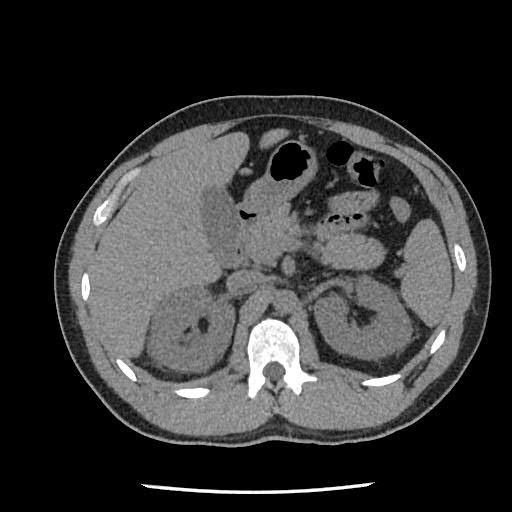 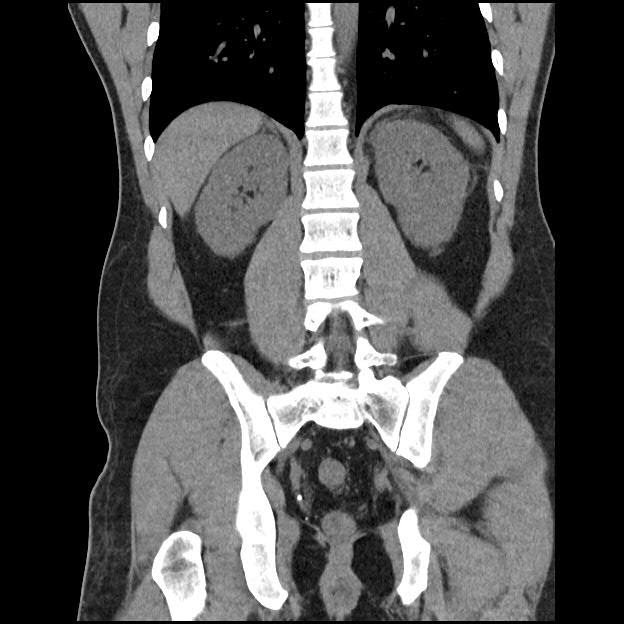 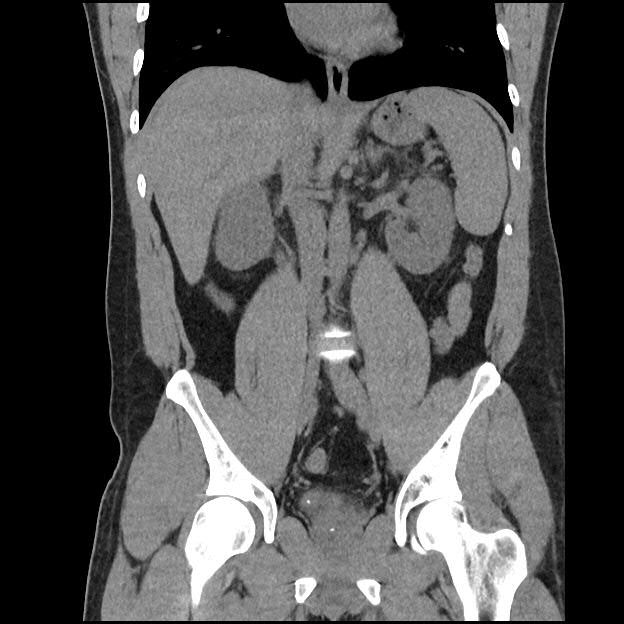 Figure 3. A CT scan of the patient’s abdomen showed 2 small calculi in the bladder.

An initial urine sample was orange in color, and the urinalysis was significant for urobilinogen, bilirubin, and ketones but was negative for heme. Results of a leukocyte esterase screen were positive, but results were negative for nitrites, white blood cells, red blood cells, and casts.

Treatment. The patient received 3.5 L of intravenous fluids with recorded urine output of 450 mL in the first 24 hours of admission. His bladder post-void residual volume was normal, at less than 50 mL.

Hemodialysis was initiated on day 4 due to worsening nausea, consistent with uremic symptoms. Results of a renal biopsy showed severe acute tubular necrosis (ATN, Figure 4). without significant interstitial fibrosis, tubular atrophy, or inflammatory infiltrates. The glomeruli were negative for immunoglobulin A, G, and M and negative for C1q, C3, fibrinogen, and kappa and lambda immunoglobulin light chains. 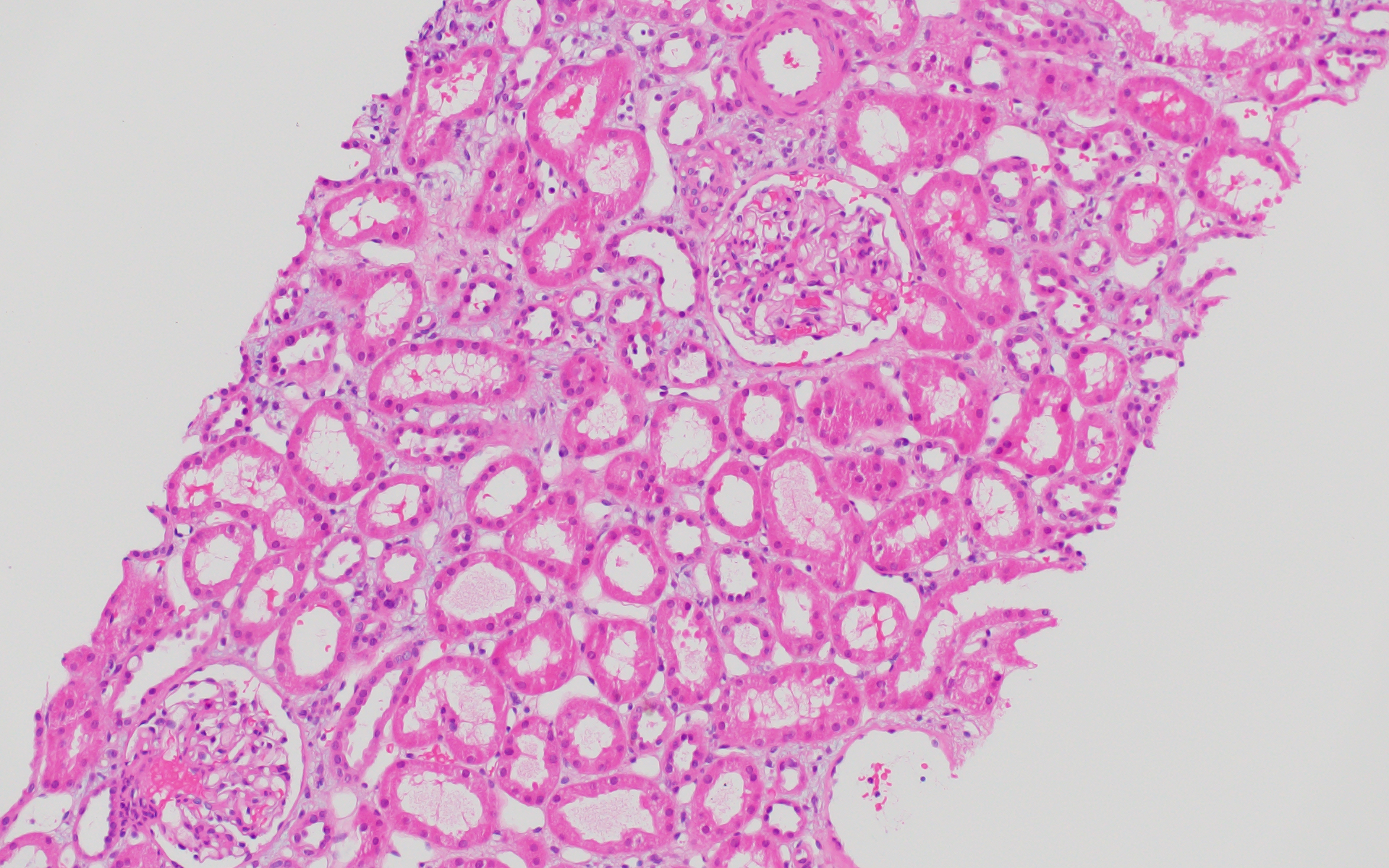 After receiving a total of 3 sessions of hemodialysis, the patient’s urine output began improving progressively. By day 7 of admission, his renal function showed improvement, and by day 10, his creatinine level was down to 4.3 mg/dL. The patient was discharged from the hospital with education to avoid phenazopyridine.

Discussion. Phenazopyridine is available over the counter. It is known to exert local analgesic action on urinary tract mucosa. Acute renal failure has been reported in literature when larger than recommended doses of phenazopyridine are taken, especially among patients with preexisting renal disease.1,2,3 Few reports of acute renal failure with recommended doses and without preexisting renal disease have also been reported.4 The recommended dosage is 100 to 200 mg up to 3 times daily for 2 days for symptomatic relief of dysuria or urinary tract pain. It does not treat urinary tract infections and acts only as a urinary analgesic. It is contraindicated in patients with an estimated glomerular filtration rate (eGFR) of less than 50 ml/min/1.73m2.

Phenazopyridine is known to cause orange discoloration of urine and has been known to affect urinalysis based on spectrometry or color reactions. It has been associated with hemolytic anemia and methemoglobinemia.5 Methemoglobinemia is suspected to occur in phenazopyridine overdose but sometimes also at therapeutic doses,6,7 increasing the affinity of hemoglobin to oxygen in turn limiting oxygen delivery to tissues and causing hypoxia.

Our patient had taken higher-than-recommended doses of phenazopyridine and had no history of prior renal disease of which we were aware. He had presented with nausea and vomiting and likely had phenazopyridine accumulation related to decreased eGFR, which was related to volume depletion. Subsequently, he developed ATN related to phenazopyridine toxicity. Although his initial urinalysis was positive for urobilinogen and bilirubin, he had no evidence of hemolysis or hyperbilirubinemia.

Phenazopyridine causing acute hemolytic anemia, particularly in the setting of glucose-6-phosphate deficiency, has been described in the literature but was not the mechanism of injury in this case.8,9 Severe hemolysis can result in pigment-induced kidney injury⁠ possibly due to direct toxicity to tubular cells and intratubular casts.10 Our patient’s initial hypoxia raises the possibility of methemoglobinemia. However, when his methemoglobin level was checked on day 2 of admission, when he was saturating well on room air, it was not elevated.

Renal biopsy did not show any inflammatory infiltrates to suggest interstitial nephritis, which is yet another way that phenazopyridine can cause acute kidney injury.4 Acute renal failure has also been reported without methemoglobinemia and hemolytic anemia,11⁠ but renal biopsy was not available in that particular case. Phenazopyridine has rarely been described as a cause of ATN1 and seems to be the mechanism of injury in our case. The kidney biopsy in our case was important to differentiate between the various etiologies.

Although the exact mechanism of nephrotoxicity is not always easy to speculate clinically without kidney biopsy, the rapid loss in eGFR in our patient was most likely due to a rapid, toxic effect of phenazopyridine on the tubules and was consistent with the biopsy findings. The rate of renal excretion of phenazopyridine from the body is dependent on the level of renal function. Hypoxia due to methemoglobinemia may increase the susceptibility to this type of injury as well.

Acute renal failure can be severe in certain patients, even requiring dialysis2⁠ as in our patient, but recovery is generally expected especially if detected early and if there is no predisposing chronic kidney disease. Treatment with N-acetylcysteine, intravenous carnitine, and alkalinization of urine has shown benefits,1⁠ but we did not use any of these modalities in our patient because information about these treatment approaches is extremely limited.

Conclusions. We believe patients without prior chronic kidney disease can also develop acute renal insufficiency related to phenazopyridine in certain situations. Clinicians should be aware of the toxicity of this commonly used medication and should look closely for signs of renal insufficiency. Greater awareness regarding the renal toxicity of phenazopyridine is needed, and patients should be educated to avoid excessive or persistent use of this seemingly helpful medication.

Comorbid conditions
Comorbid conditions
COVID-19 Roundup: New Onset Alzheimer Disease, Elevated Risk for Thrombotic Diseases, and More
This COVID-19 roundup discusses the risk of new onset Alzheimer disease, vascular events, and atrial fibrillation after COVID-19 infection, and the impact of vaccination against COVID-19 in individuals on...
management
management
Updated Guidelines Released on Major Depressive Disorder Management
A joint clinical practice guideline on the management of major depressive disorder was released earlier this year, which included 36 recommendations on screening, monitoring, and treating this condition. ...
treatment
treatment
Treatment Adherence Decreases Risk of Rehospitalization in Adults With OSA, CVD
Researchers examined the impact of adherence to continuous positive airway pressure therapy on the risk of rehospitalization in individuals with comorbid obstructive sleep apnea and cardiovascular disease. ...
antibiotics
antibiotics
Exposure to Antibiotics and Atopic Dermatitis Onset in Children
Researchers sought to better understand the relationship between early-life exposure to antibiotics and later onset of atopic dermatitis in children.
cancer risk
cancer risk
Antipsychotic Medication Use May Augment Risk of Breast Cancer
Researchers performed a systematic review and meta-analysis to determine the association of antipsychotic medication use with breast cancer in women.