Poorly Differentiated Carcinoma of the Orbit

A 76-year-old man with a history of left-eye blindness since age 4 presented after having developed swelling of the left orbit. His blindness had begun after accidental trauma to the left eye with a pronged fork, resulting in his having undergone multiple surgical procedures as a child.

Medical records of his childhood diagnosis and interventions were unable to be obtained. The patient denied having a history radiation to the eye, however. He has a 72 pack-year smoking history but quit 39 years ago.

Diagnostic tests. Results of a biopsy of the area revealed poorly differentiated carcinoma. A computed tomography (CT) scan of the orbit with intravenous contrast and a CT scan of the brain without contrast revealed a 6.5-cm soft-tissue mass of the left orbit with remodeling of the orbital walls and cortical dehiscence. There was expansion of the left infraorbital canal with soft-tissue extension to the left maxillary sinus and mass effect on the left anterior frontal lobe.

He was referred to an otolaryngologist, and nasopharyngeal laryngoscopy findings were negative for cancer involvement.

Magnetic resonance imaging (MRI) of the brain with and without contrast showed an enhancing mass surrounding the left orbit with erosion and of the left orbital walls, including the anterior left cranial base. The extraocular muscles were obscured, and the optic nerve was encased. Perineural invasion was noted at the V2 segment of the trigeminal nerve (Figures 1 and 2). 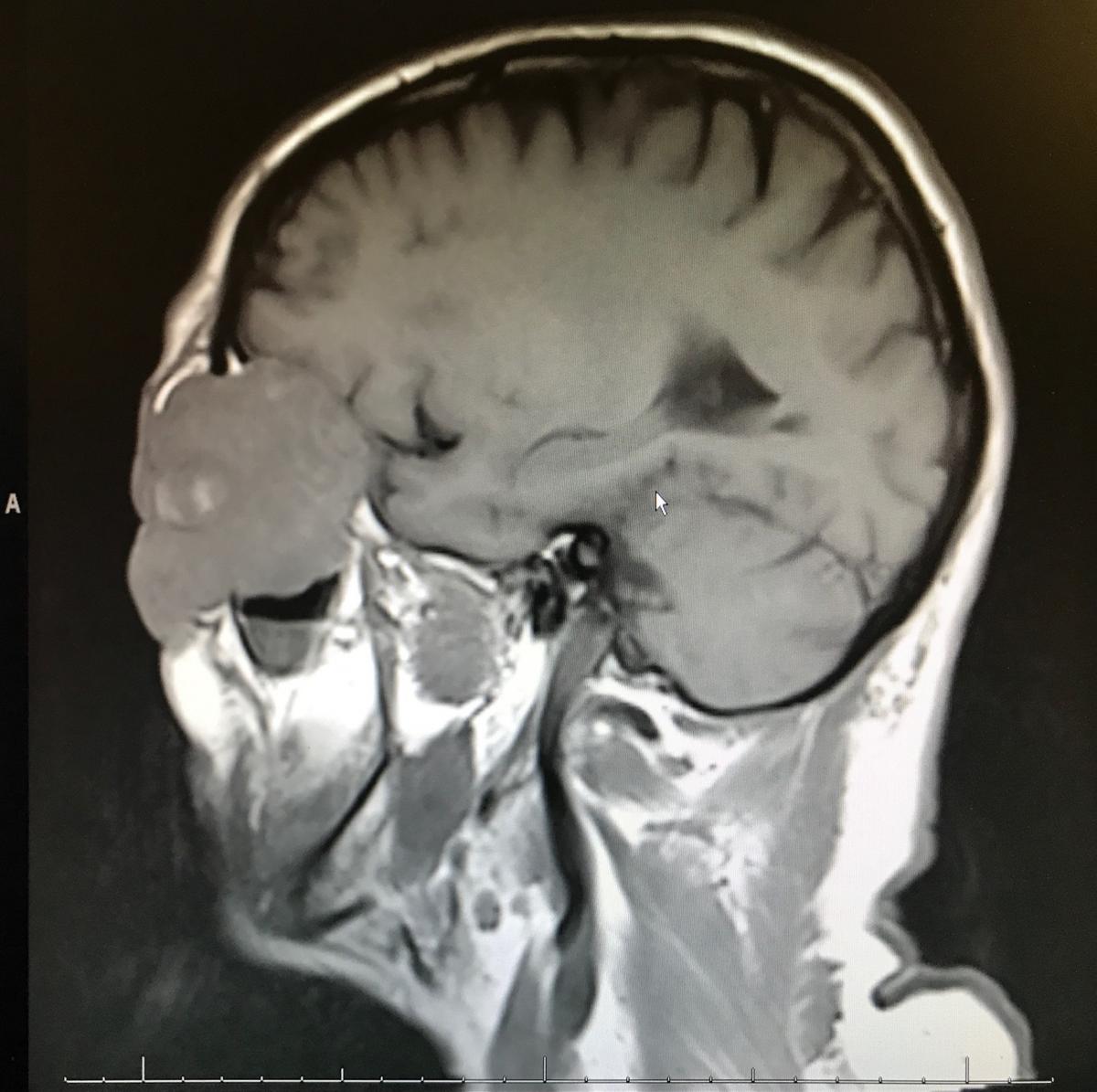 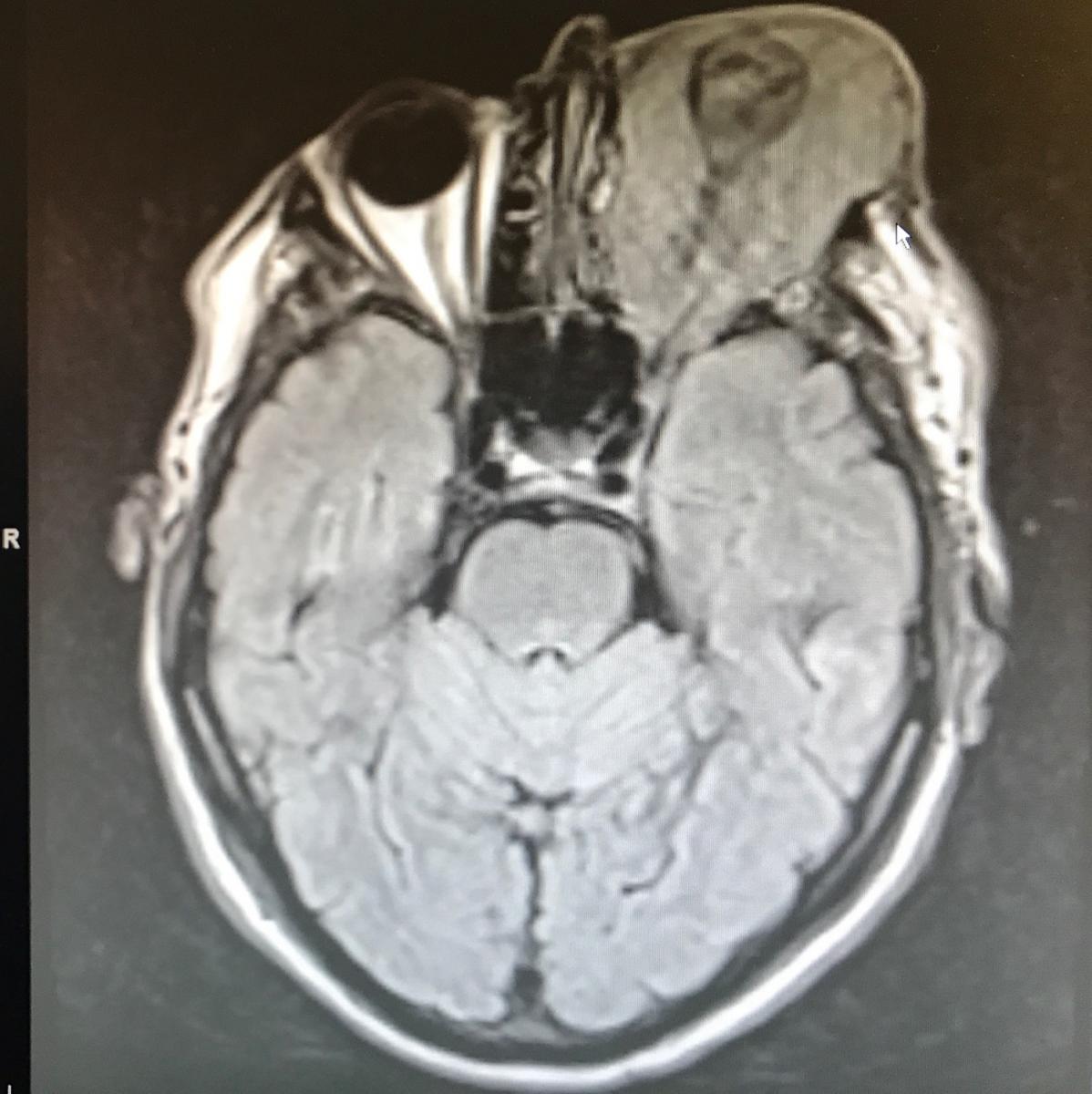 A positron-emission tomography (PET) scan revealed uptake in several lymph nodes along the left side of neck with standardized uptake values ranging from 1.79 to 2.31; these included a 5-mm left parotid, a 6-mm right level IB, a 5-mm left level IIA, a 4-mm left level IIA lateral, and a 5-mm right level IIA lymph node without disease in the supraclavicular fossa. The PET scan did not elucidate evidence of a primary site or other metastasis.

Treatment. After consultation with the neurosurgery team, the decision was made to resect the tumor. Approximately 3 weeks after presentation, the patient underwent left orbital exenteration, which included a left frontotemporal craniotomy with superior and lateral orbital osteotomy, a partial extradural anterior clinoidectomy, decompression of the superior orbital fissure and orbital canal, and free-flap repair of the cranial base. Twenty-seven lymph nodes were removed, all of which were negative for carcinoma. All margins were negative. He recovered well, experiencing self-limited epistaxis.

Considering the tumor histology, size, invasiveness, and unclear origin, radiation therapy with concurrent chemotherapy was initiated to reduce the risk of local recurrence. After a 1-month delay to minimize the risk of postsurgical skin-flap necrosis and breakdown, the patient was treated with radiation therapy to 60 Gy in 2-Gy fractions with concurrent cisplatin chemotherapy. Extreme care was taken to minimize the dose to the optic chiasma to optimize vision preservation in the right eye. Initially, he tolerated the 30 fractions of radiation and weekly cisplatin well. He experienced a headache in the posterior left side of his head, possibly attributable to the radiation therapy.

Outcome of the case. One month into treatment, the patient’s case was complicated by a Clostridium difficile infection and a left inguinal hernia. His weekly cisplatin was withheld until antibiotic treatment had been completed and the inguinal hernia surgically repaired. He then completed the radiation therapy with minimal dry desquamation and swelling in the lower portion of the skin flap. One month after completing radiation therapy and chemotherapy, he had no clinical evidence of residual or recurrent disease.

Discussion. Cancer of an unknown primary site is diagnosed in approximately 2% of cancers.1 Most cases arise from adenocarcinoma; however, up to 25% are histologically poorly differentiated. Most of these poorly differentiated tumors have carcinoma features.2 Common locations for cancer of unknown primary site include bone, skin, and lymph nodes, but any location is possible, including the orbit—that is, the eye socket, the eye, ocular muscles, blood vessels, glands, and cranial nerves.3

Tumors account for only approximately one-fourth of orbital disease cases. Approximately 3540 new cases of primary cancer of the eye and orbit—mostly melanomas with some lymphomas—are estimated to occur in 2018 the United States, resulting in approximately 350 deaths.4 The most common benign tumor of the orbit in adults is a cavernous hemangioma.5

In adults with metastatic disease to the orbit, among the most common primary sites are the nasopharynx, lung, liver, and breast.6 In one study of 46 patients with metastatic disease to the orbit, 30% had carcinoma of unknown primary origin.6 It is not uncommon for the symptoms caused by the orbital metastasis to be the first presenting symptom of malignancy. Orbital metastases are generally treated using a combination of surgery, chemotherapy, and radiation therapy.

There is limited literature describing the optimal treatment of patients with poorly differentiated carcinoma of unknown origin in the paranasal region including the orbit. This is an extremely rare and heterogeneous group of tumors.7 Of note, the patient in this case presented with poorly differentiated carcinoma of the orbit with a history of childhood trauma and numerous surgical interventions. He had been blind in the affected eye since childhood, which perhaps prevented him from experiencing symptoms earlier in the disease course.

In tumors of unknown primary origin, immunohistochemistry findings are very important in determining the diagnosis and individualizing treatment.8 In patients such as ours, whose immunostain results were consistent with poorly differentiated carcinoma, further studies can be performed, including molecular cancer classifying assays (MCCAs) and gene expression profiling. One retrospective study showed that 83% of tumor-cell lines could be determined using MCCA.9 Nevertheless, the effect of routine molecular profiling and genetic analysis on patient outcomes has yet to be properly studied.10

Only a small percentage of cancers of unknown primary are classified as poorly differentiated carcinoma. No standard treatment regimen exists for these patients, and clinicians should personalize treatment strategies based on the particular case. Using a combination of chemotherapy and radiation therapy after surgery can be an effective approach to minimizing the risk of local recurrence.