A 15-year-old Hispanic boy with no significant medical history presented to our pediatric emergency department with severe weakness. He was in his usual state of health the night prior to presentation but woke up that morning unable to get out of bed. He reported trying to get up, but he could not bear weight and fell forward, hitting his chest on a doorknob.

The patient denied recent illness, fever, headache, neck pain, photophobia, or numbness/tingling. The patient reported that he had been smoking marijuana a few times a week for the last few months and had smoked the night before. He denied other drug use.

Physical examination. The patient was alert, oriented, and nontoxic appearing. He was afebrile (37.2 °C) and normotensive (117/69 mm Hg), with a normal heartrate of 74 beats/min, elevated respiration rate of 18 breaths/min, and a normal oxygen saturation of 100% on room air. Results of a neurological examination revealed a normal mental status and intact cranial nerves.

He had 1/5 strength bilaterally in his upper and lower extremities with 2/5 grip strength. Reflexes were normal in all extremities with no clonus. The patient had no change in mental status, speech, visual fields, or respiration. He had no nuchal rigidity, spinal tenderness, or photophobia, and Kernig and Brudzinski signs were negative.

The patient was unable to stand, turn, or sit without significant assistance. There was a large abrasion with ecchymosis on the chest wall at the area of impact from the doorknob.

Diagnostic testing. Laboratory studies were conducted, and a neurologist was consulted to plan for urgent magnetic resonance imaging (MRI) of the brain and spine. The results of the laboratory tests showed a critical level of potassium at 1.7 mEq/L, which was repeated and confirmed.

An urgent electrocardiogram (EKG) was conducted, results of which showed a prolonged QT to 576 ms and depressed T waves with presence of U waves (Figure 1). The patient was immediately given 2 peripheral intravenous 10-mEq potassium chloride boluses and placed on a cardiac monitor. After the intravenous potassium was administered, his potassium level increased to 2.7 mEq/L. 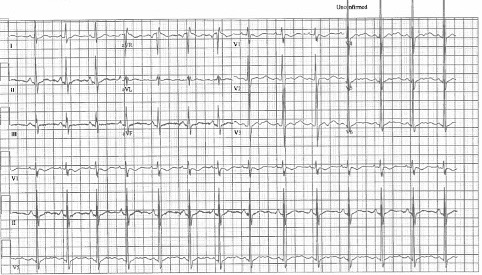 Figure 1. An initial EKG showed normal sinus rhythm at 85 beats/min, a QTc of 576 ms with presence of U waves.

A urine toxicology test returned results positive for marijuana. The patient and his mother denied a family history of muscle weakness or renal issues. The patient denied any preceding heavy exercise, significant stress, or high-carbohydrate meals. The patient was admitted to the pediatric intensive care unit (PICU), and a nephrologist and cardiologist were consulted.

Discussion. Acute, severe muscle weakness in a pediatric patient encompasses a broad differential diagnosis, including Guillain-Barré syndrome, myasthenia gravis, tick borne paralysis, botulism, spinal lesion, acute flaccid myelitis, ingestion, electrolyte disturbance, heavy metal poisoning, and conversion disorder. The first step to narrowing this differential is a focused history and physical examination. Our patient was otherwise healthy without any known medical issues or daily medications, and his initial presentation was immediately concerning for either a neurological or muscular disorder. Upon neurological assessment, the patient had significant but diffuse weakness with intact reflexes, which was less concerning for a primary neurological issue. Typical in both Guillain-Barré syndrome and acute flaccid myelitis, a patient would present with weakness accompanied by decreased reflexes. Infectious causes such as spinal abscess or tickborne paralysis were low on the differential diagnoses, as the patient was otherwise well-appearing, afebrile, and without any preceding illness or ticks on the skin.

The initial laboratory test results point to a clear etiology for muscle weakness, but the actual cause of the severe hypokalemia remained unclear. The etiology of hypokalemia was thought to be from a primary renal disorder, thyroid disorder, or genetic abnormality. Genetic hypokalemic periodic paralysis (HOKPP) was a differential diagnosis, given the acute presentation of hypokalemia and age of the patient.1 In HOKPP, there is dysfunction in either a sodium or calcium channel that causes an imbalance between intracellular and extracellular potassium, causing a precipitous drop in serum potassium.2 The rapid shift is due to hyperactivity of these channels. The change in gradient across the cell membrane prevents excitation of the muscle cell and leads to paralysis, which typically affects the extremities more significantly than the trunk. The events are often triggered by heavy exercise, a high-carbohydrate meal, or significant stress.2 Insulin release, a known cause of potassium shift, can trigger an episode of severe hypokalemia in patients with HOKPP. In our patient, renal and thyroid function were within normal limits throughout his hospital stay. Results of a renal workup by the pediatric nephrologist were negative for genetic causes of renal dysfunction.

Another syndrome that was considered was Andersen-Tawil syndrome—a triad of periodic paralysis, arrhythmias, and distinct facial features.3,4 Our patient did not have the phenotypic features—short stature, hypertelorism, clinodactyly, or micrognathia. It was hypothesized that our patient’s acute episode was triggered by marijuana use that was followed by a carbohydrate binge and insulin surge. A previous case report in an adult patient showed marijuana to be the trigger for HOKPP, but this has not yet been reported in a pediatric patient.5

This case demonstrates a peculiar etiology of hypokalemia with severe effects—profound weakness and marked QT prolongation—an uncommon presentation of a common drug of misuse seen in pediatric emergency departments.

Patient outcome. The patient’s potassium level stabilized with serial boluses of potassium chloride and a switch to oral maintenance. His EKG results normalized as well (Figure 2). He reported that he has since had a few episodes of muscle weakness, although they were not as severe as his initial presentation. 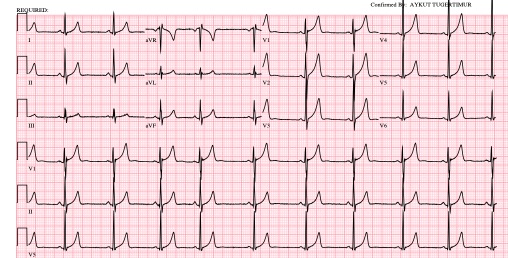 Figure 2. Results of a repeat EKG after the patient’s potassium level had normalized showed normal sinus rhythm with resolution of U waves.

As an outpatient, the patient received genetic testing with a repeat panel for HOKPP. The diagnosis was confirmed, finding a pathogenic variant in CACNA1S.1 The mutation discovered is the most common genetic cause for HOPKK and can be passed on via an autosomal-dominant manner to future generations. The finding of this genetic mutation and normalization of the EKG, further ruled out Andersen-Tawil syndrome, which is typically a mutation of KCNJ2.3,6