A 38-year-old man with a history of diverticulitis presented to the emergency department (ED) with a 4-day history of intermittent worsening right upper quadrant abdominal pain associated with nausea and vomiting. One week previously, the patient had been seen in the ED of a different hospital for similar symptoms, where he had been given antiemetic medication and discharged home.

Relevant laboratory test results included a white blood cell (WBC) count of 19,300/µL with a neutrophil predominance of 15,300/µL, a hemoglobin level of 12.1 g/dL, and a platelet count of 421 × 103/µL. Computed tomography (CT) scans of the abdomen and pelvis revealed a complex mass in the medial right hepatic lobe (Figure 1). The patient was admitted to the hospital due to sepsis and liver abscess. 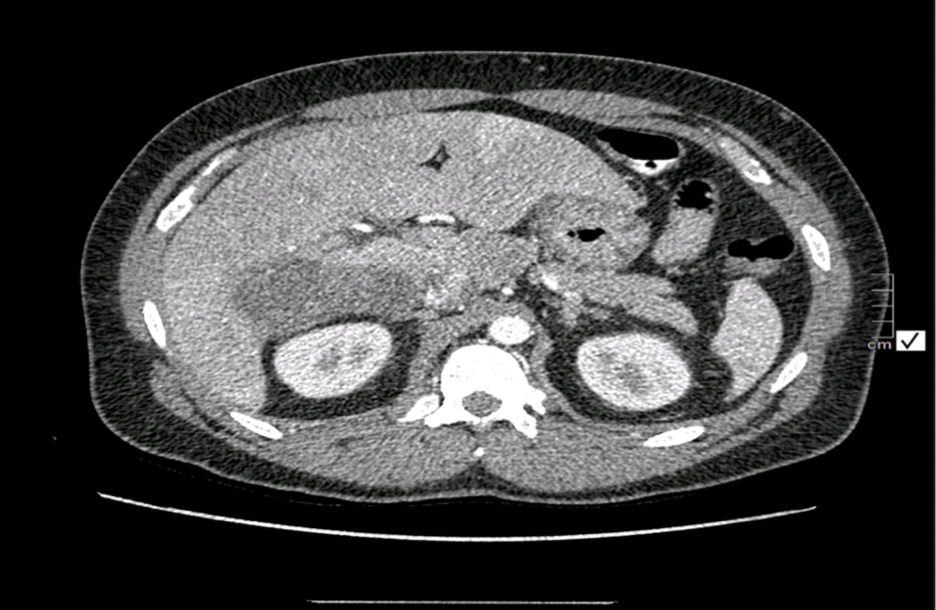 The patient was given intravenous fluids and was started on piperacillin-tazobactam and metronidazole. He underwent drainage of the abscess and had a pigtail catheter placed. Repeated CT scans of the abdomen and pelvis 5 days after the drainage catheter was placed, and then again 4 weeks after drainage, showed a decrease in abscess size (Figures 2 and 3). Blood cultures did not grow any organisms; however, liver drainage cultures grew Escherichia coli, coagulase-negative staphylococci, Streptococcus constellatus, Bacteroides thetaiotaomicron, and Parvimonas micra. 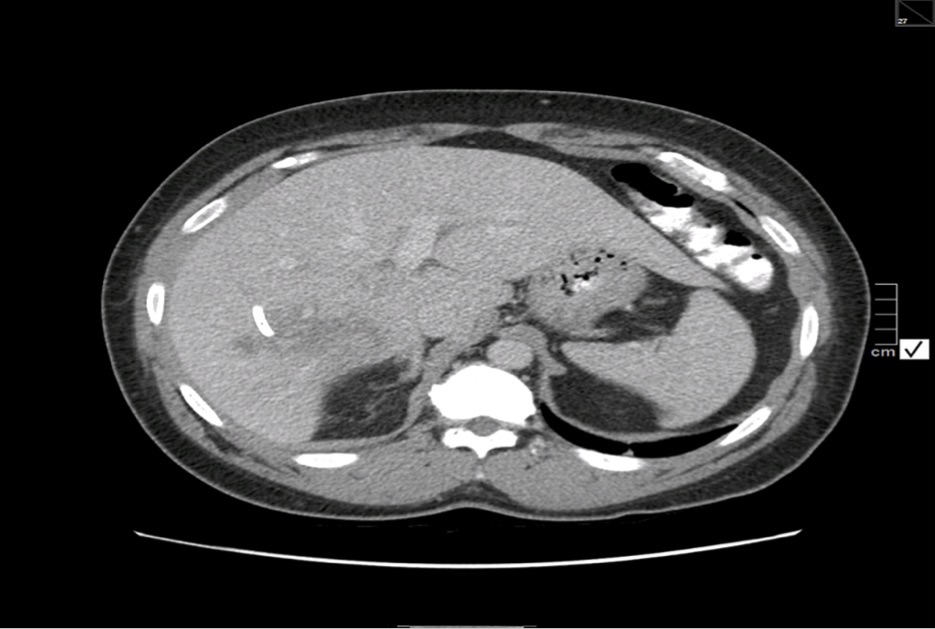 Figure 2. CT scan 5 days after the drainage catheter was placed showing a decrease in size of the liver abscess. 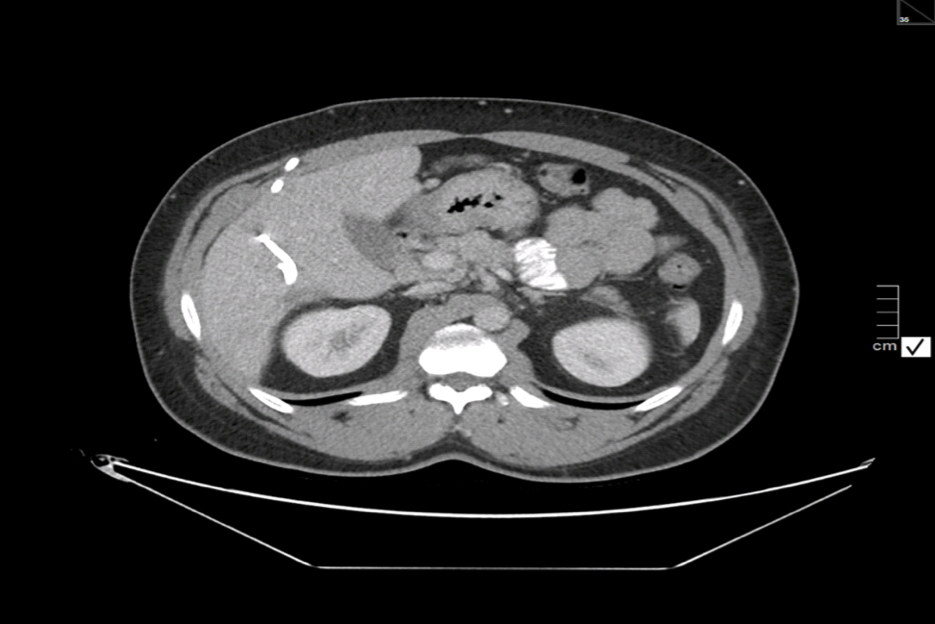 Figure 3. CT scan 4 weeks after drainage showing a marked decrease in size of the liver abscess.

Subsequently, the patient’s WBC count normalized, and he became afebrile. A consultant interventional radiologist advised the patient to schedule an appointment for a drain check once the drainage had decreased to less than 10 mL and the fluid had become clear. Arrangements were made for the patient to have home care. The patient also was advised to see a dentist and to follow up with a gastroenterologist for a colonoscopy. He was discharged after an approximately 2½-week hospital stay.

Discussion. Abscesses of liver parenchyma are common and account for approximately half of all cases of visceral intra-abdominal abscesses. This high percentage was confirmed by a 12-year study published in 1973 and conducted at the University of Cincinnati among 501 patients, the results of which revealed that bacterial liver abscesses constitute almost 48% of visceral abscesses and 13% of abdominal abscesses.1

In a study conducted in the United States from 1994 to 2005 among 17,787 cases of pyogenic liver abscess, the incidence was 3.6 per 100,000 population.2 In another study conducted in Canada from 1999 to 2003, the incidence of pyogenic liver abscess was 2.3 per 100,000 population, and the risk of acquiring an abscess was higher in men than in women (3.3 vs 2.3 per 100,000 population).3 Higher mortality is associated with age older than 60 years, chronic kidney disease, diabetes, malignancies, liver transplant, pancreatic disease and other diseases of hepatobiliary tract, a diagnosis complicated by bacteremia or septicemia, and regular use of proton-pump inhibitors.2,4,5 Geographic and socioeconomic factors such as enrollment in Medicare or Medicaid vs private insurance also have been linked to higher mortality.2 Taiwan has been found to have a much higher incidence rate than that of the United States and Canada, at 17.6 per 100,000 population.6

Most liver abscesses are caused by mixed aerobic and anaerobic flora ascending via the biliary tree, via leakage of bowel contents into the intraperitoneal cavity with subsequent peritonitis, or via local pelvic infection. The gram-negative, rod-shaped, facultative anaerobes E coli and Klebsiella pneumoniae are the most commonly identified pathogens, accounting for 29.5% and 18.1% of cases, respectively.2,3 Gram-positive cocci such as Staphylococcus and Streptococcus species also have been frequently isolated from pyogenic liver abscesses. The Streptococcus anginosus group (formerly the Streptococcus milleri group), which consists of multiple Streptococcus species, was the most often encountered pathogen in Meddings and colleagues’ study, especially in patients with malignancies.2 Staphylococcus aureus and Streptococcus pyogenes are usually seeded in the liver parenchyma via hematogenous spread and are responsible for those rare occurrences when the abscess is formed by a single bacterial species.7 Obligate anaerobes are cultivated from only 8.6% of all liver abscesses, but this number might be falsely low and might be explained by the difficulty of culturing true anaerobes.3

Only two cases, both in South Korea, have been reported of pyogenic liver abscesses caused by P micra: a single liver abscess8 and concomitant liver and brain abscesses.9 Several cases of P micra causing severe infections in other organs have been reported, including spondylodiscitis,10 epidural abscess,10,11 and lung abscess.12

The Parvimonas genus contains a single species, P micra, which formerly had been known as Peptostreptococcus micro and was renamed only in 2006.13 It is a gram-positive anaerobic coccus and is a part of the normal flora of the human gingival crevice and gastrointestinal tract. It is often associated with periodontitis, especially in elderly patients.13

As mentioned above, anaerobes generally are very hard to culture due to their slow growth and capricious behavior in cultivation medium, so traditional diagnostic laboratory methods such as culture followed by antibiotic susceptibility testing are usually limited in identifying these species and can be very time-consuming. However, current technology involving molecular sequencing techniques such as bacterial 16S ribosomal RNA gene sequencing allows more rapid identification of these pathogens and their antimicrobial sensitivities.14

P micra infection is an uncommon cause of liver abscess that could be overlooked. However, it is important to diagnose the etiology early in order to select the most appropriate surgical and antibiotic treatments. The implementation of new diagnostic tools such as 16S ribosomal RNA gene sequencing could help quickly determine the bacterial cause of the infection and improve clinical outcomes.